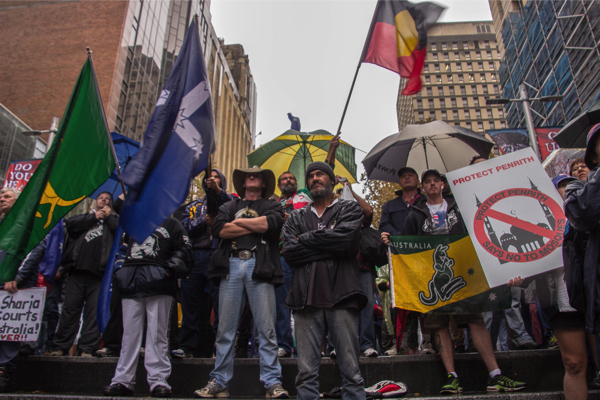 A banner reading ‘stop the mosques’ was unveiled at a Collingwood vs Richmond AFL game last month and in February, United Patriots Front activists outnumbered anti-racism activists when protesting against the building of a mosque in Bendigo.

The most recent protest involving extreme violence was at a local Halal Expo when anti-Islamic protesters were ambushed by Antifa, an anti-fascist protesting organisation.

Chairman of the Party for Freedom, Nick Folkes said his party organised the protests to show their opposition to Halal and Islamic culture but says they have never had an arrest on their side.

“We don’t go with the intention of starting violence. We always liaise with the police, and on the day we let them know what was going on and then the other side turn up without a protest permit, carrying on like idiots,” he tells upstart.

A Party for Freedom activist was left bloody with a serious head wound and there’s an ongoing investigation by police over the matter.

“Wherever we go we attract a counter presence and we live in a political environment where both sides are very passionate. Some people might see it as controversial but I see multiculturalism and the halal levy as controversial in itself,” he says.

The Party for Freedom started off as a protest movement group and now stand as a patriotic party who see the changing demographics of Australia as a “real problem”.

“There were so many opportunities when I moved to Sydney in 1986, there were jobs everywhere, it was predominantly white Europeans, it didn’t have the social problems that it has today,” Folkes says.

Is there enough focus on immigration?

The Conversation recently released a report examining the concepts facing Australia in the lead up to the 2016 federal election and says whilst immigration isn’t at the forefront of the political agenda, maybe it should be.

The article claims bipartisanship on immigration policy is doing little to counter racism within the community.

“An Islamist-linked terrorist attack on Australian soil or overseas, or the arrival of more asylum-seeker boats, could quickly change the political dynamics of immigration,” the report reads.

“Such events would likely intensify anti-refugee, anti-Islamic and anti-multicultural feeling in the community.”

Folkes believes Muslim immigration has been a “total disaster”.

“Muslim refugees from Syria should be resettled in other Muslim countries,” he says.

“They’re problematic because of their criminal behaviour and also their welfare dependency and they’ve got a different culture.”

One of Folkes’ biggest worries is job security amongst Australians, with manufacturing lost to parts of Asia and immigration growing at a faster rate than new jobs.

“Some people say I’m just a racist and I ‘hate brown people’, but thats not the case, I just see economic and social problems being more important in the reasons why I form my opinions,” he says.

Should Australia be focusing inwards?

“I want to protect what’s left and give opportunities to people already living here, of all backgrounds. That includes first Australians, as Aboriginal communities get little from the government,” Folkes says.

“In Sydney the council spent $2 million on Chinese New Year but Aboriginal groups were denied small funding for an Anzac Day commemoration.

“If Chinese want to celebrate Chinese New Year, I’ve got nothing against that but don’t rely on the state’s taxpayer to fund your culture in Australia.”

Although Sydney may have widespread multiculturalism, Melbourne recorded the highest proportion of strong support for it (48%) compared to the national average (37%).

“In Melbourne, we do get more of a reaction from the left [at protests] because the left definitely have more of a stronghold there,” Folkes says.

In a city that prides itself on multiculturalism, the Minister for Multicultural Affairs Robin Scott says the government strongly condemns the actions of any minority group that seeks to divide our society.

“Diversity is one of our greatest strengths and we are proud to be the multicultural capital of Australia,” he tells upstart.

The Scanlon Foundation’s 2015 Mapping Social Cohesion survey found that 86% of Victorians believe multiculturalism has made Australia a better and stronger place.

“We are committed to not only celebrating, but strengthening social cohesion in Victoria,” Scott says.

“While everyone has a right to protest, they must conduct themselves in a peaceful and respectful manner. Violent conduct is completely unacceptable and has no place in our community.”

Nick Folkes disagrees with the survey saying recent terrorism attacks in Europe are an indicator of what’s to come.

“In Western Europe and in France in particular where they have 12% Muslim populations, people have tremendous problems,” he says.

“If our government continues to go down this road then we will pay for it in the future.”