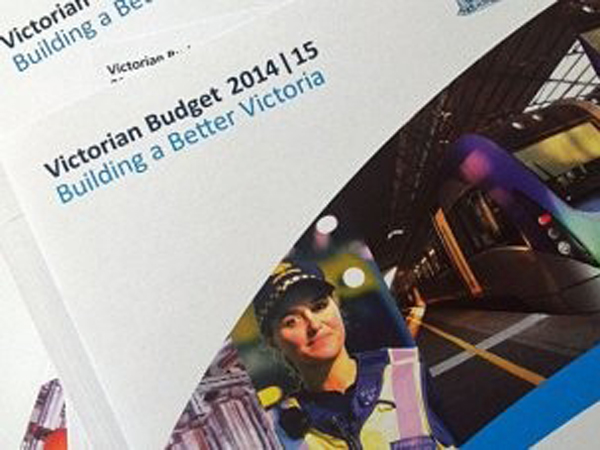 Despite dark clouds looming over next week’s federal budget, the sun is shining brightly in Victoria with the state now set for a mass spending spree following treasurer Michael O’Brien’s unveiling of the 2014-15 state budget on Tuesday.

Opposition leader Daniel Andrews has been quick to claim that the government is merely throwing money at voters in an attempt to claw their way out of a potentially humiliating defeat in September’s election, however the Napthine government’s second budget seems to reflect a genuine attempt to listen to voter concerns.

With an electorate weary of Melbourne’s increasingly feverish public transport and traffic congestion problems, the biggest demand has undeniably been the provision of infrastructure that can keep up with population growth, .

With the starring feature of this budget being a massive $27 billion investment in infrastructure, of which $7.1 billion will be spent within the next 12 months alone, surely this must be a sign that the Napthine government is finally waking up to its constituents.

With this sort of money it is now very likely that heavily touted projects such as the Melbourne Metro, Airport Rail Link and the East-West Link will finally get off the ground.

The Melbourne Metro, renamed the “Melbourne Rail Link” in the budget, is now expected to receive between $8 and 11 billion worth of funding and has been rerouted through Fisherman’s Bend and will include the long awaited airport rail link. The project is expected to create over 3,500 jobs and increase capacity on the rail network by 30 percent.

Voters should also be pleased with the commitment of $685 million towards the removal of four level crossings following a number of fatal collisions in recent years. This will form part of a wider commitment to improve the commuter rail network including a $2.5 billion injection into the Pakenham-Cranbourne rail corridor project, free tram travel in the CBD and a $44 million upgrade of the city loop.

Extensive investment in regional infrastructure is also on the cards with the likes of $362 million going towards duplicating 37 kilometres of the Princes Highway, a minimum of $180 million being allocated for the Murray Basin freight rail link and $40 million for Wi-Fi and improved cellular access on V-Line trains.

On metropolitan roads approximately $10 billion will be dedicated towards completing the Western section of the controversial East-West link, which when completed will offer a much needed alternate route to the West Gate Bridge for commuters from Ballarat and Geelong. The likelihood of this going ahead is sweetened by the confirmation that the federal government will also be pitching in two lots of $1.5 billion

To top it off, $850 million will go towards widening the Tullamarine freeway near the Bolte Bridge and a further $370 million will be allocated purely for the purposes of restoring roads across Victoria.

Such an extensive opening of the public purse has been applauded by the Victorian Council of Social Services because of the employment prosperity that will likely result.

“This Budget supports the view that high public spending is the correct antidote to a slow economy.”

Infrastructure and jobs aside, voters can also take pride in the fact that essential services are also a big winner in this year’s budget.

Education will receive a $500 million boost to build 12 new schools and maintain 70 others. In total, $2.8 billion will be invested over five years as part of a $5.4 billion dollar school funding initiative in conjunction with the federal government along with a $1.2 billion injection into the vocational education and training sector.

Unfortunately, health care looks to have been lost among the infrastructure focus of this budget with the sector to be allocated a mere $1.4 billion over the 2014-15 period.

Despite not receiving a huge splurge, hospitals and health care services and capacity are still likely to expand.

The Victorian Cancer Centre ($1 billion), Bendigo Hospital ($637 million), Box Hill Hospital ($440 million) and the Monash Children’s Hospital ($250 million) are just some of the hospitals to be built or upgraded with the funding.

In addition, $200 million over four years will be allocated towards supporting people with disabilities along with a $190 million package to improve access to elective surgery.

Perhaps the most confusing part about this budget is how a government, that has consistently presented itself as ‘strapped for cash’, is suddenly capable of such dramatic shifts in capital distribution.

“Because of this economic management, we are able to deliver this sort of transformational, job-creating infrastructure projects that Victoria needs,” Mr O’Brien told the Herald Sun on Tuesday.

The government has forecasted a $1.3 billion surplus over the next financial year and this is expected to grow to $3.3 billion by 2017 making Victoria the only state to be in the black in the near future.

The possibility of ongoing surpluses only increases the likelihood that many of the projects outlined in the budget will have sufficient funding to go ahead.

However a projected 7.2 percent surge in taxation revenue should not be overlooked as a potential source of finance either.

A combination of land taxes and stamp duty will deliver an additional $7.5 billion over the coming 12 months, while GST and a slightly reduced payroll tax are each expected to net the government  $11.8 billion and $5.1 billion respectively.

The kitty should also receive a $400 million top up from the sale of the Rural Finance Corporation, which was privatised to Bendigo and Adelaide Bank on Monday with further proceeds likely to come from the sale of a 40-year lease of the Port of Melbourne.

But despite the fanfare surrounding the budget, not everyone is happy with where the money is going.

Speaking to ABC News, Fiona McCormack of Domestic Violence Victoria has labelled the $8 million set aside to assist victims of domestic violence as “an absolute disgrace” and has called upon the premier to explain why the prevention of family violence figures so little in the government’s priorities.

Similarly, President of the Australian Medical Association Stephen Parnis claims the funding is insufficient to fix the problems in the health sector. “$190 million…that’s less than half of what we asked and we believe the numbers are going to continue to deteriorate,” Mr Parnis told the ABC.

Organisations such as Wesley Mission and the Community Housing Federation of Victoria are also unimpressed with the budget’s failure to allocate sufficient funds to assist the 35,000 Victorians waiting for public housing.

Given that government money is finite, allocating it properly is always a tricky task and the Napthine government seems to have pulled it off moderately well and that might just be what gives them a fighting chance in September’s election.

Tom Colwell is a third year Bachelor of Law/Media student and Politics and Society Co-Editor for upstart. Follow him on Twitter @TomColwell2