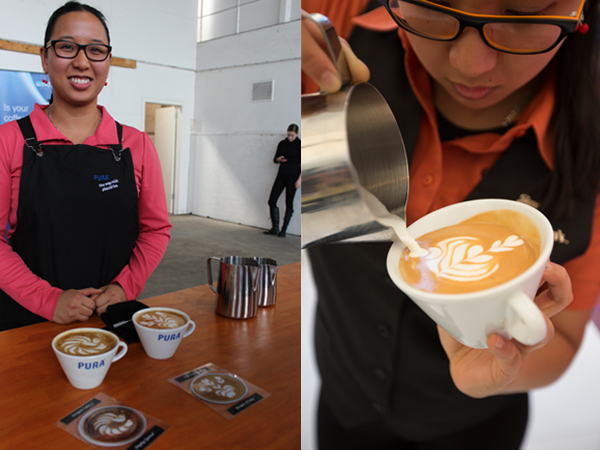 As Melburnians, we like to think we’ve experienced everything that good coffee has to offer.

We not only judge our coffee baristas on the roast, the grind and quality of beans they use, but increasingly presentation is becoming a major factor in defining a good and bad brew.

Latte art, in all its different designs and colours is fast becoming a popular way to serve coffee across Melbourne.

In fact, for some coffee connoisseurs, the deft hand movements and creative imaginations producing two-dimensional artworks that sit atop the milk foam, is the crowning glory for what many of them would describe as the perfectly brewed latte.

Illustrating latte art’s popularity, 10,000 coffee fans from around Australia and the globe attended the event with another 11,500 viewers watching online.

Surprisingly though, it wasn’t a Melburnian but a West Australian, Rie Moustakas, who represented Australia at the competition after taking out the national title earlier this year. Mosutakas attributes the popularity of latte art to its ability to bring joy to people’s lives.

“For me personally, I love it because I’m all about customer service,” she tells upstart.

“You have your regulars who come in, you chat to them for a few seconds a day, you serve them awesome coffee with a lovely pattern on it and if you really put time and effort and love into their coffee, it can make them smile.”

Social media has played a part in the popularity of the art form, with Instagram and Facebook opening up latte art to new audiences and allowing latte artists to connect from around the world and share ideas.

The growing scene has led to cafes organising their own “smack down nights” to determine who are the best latte artists around the country.

“It’s like baristas fight club,” she says with a laugh.

“We all gather somewhere in the location at night and then we go head to head and like two baristas battle it out. Two baristas pour some latte art and the judges decide who goes onto the next round, until you have two left and have a winner from that.”

It has been a meteoric rise for Moustakas, who only started competing in latte art championships last year on the advice of a friend, where she finished second. This year she went one better – state champion and then national champion. This was the first time a West Australian had ever won the award.

Her journey to the world championships was not without difficulty though.

“Because I live in Perth, no one in Western Australia had ever come top three in nationals before, so I didn’t really have anyone who could train me in WA for the worlds.”

The problem was solved by Gloria Jeans who sponsored flights for Moustakas to Melbourne and Sydney to train at Veneziano, with former Australian Latte champion Jen Marks who was able to clue Moustakas up on the worlds and what the judges would be looking for.

As Moustakas explains, it’s not only about creativity with latte art but also the performance as well. Judges not only look for original artwork and the definitions in contrasts between the white froth and brown coffee, but also on the harmony size, the position of artwork in the cup as well as the overall performance on stage with the judges and audience. 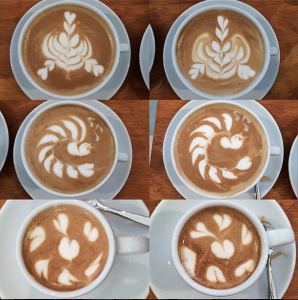 The inspiration for her artwork can come from anywhere. For the final, Moustakas presented a singing Quetzal as one of her three final pieces, with the inspiration for the Quetzal coming from a mural outside Dimattina Coffee.

“It was on those days when you have no creative ideas and you think ‘what am I going to do?'” she says.

“On the side of Dimattina Coffee there’s a big mural and there’s one of those birds with a coffee cherry branch in its beak and I thought ‘that’s a cool bird maybe I’ll try doing that for latte art’, so I researched what it was, created it and developed it into what it is today.”

Moustakas finished fourth overall out of the 32 competitors in the world championships, but she wasn’t fussed with the result, dedicating the performance to the support team who helped her get there.

“The run through didn’t go exactly to plan, but it never goes to plan, you’re always your harshest critic,” she says.

When asked what the secret ingredient was to good latte art, Moustakas says it’s all about attitude.

“I used to think I’d never be able to pour that,” she says.

Naim Kurt is a Bachelor of Journalism student at La Trobe University, and a staff writer for upstart. You can follow him on Twitter: @nkur7.