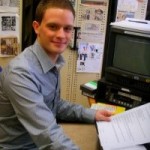 Sean Marsicovetere graduated with an Honours degree in Journalism in 2010. The focus of Sean’s research was how new technologies have changed the production processes of news within TV newsrooms.  Sean is currently working at Channel Ten in the newsroom as a production assistant. A career highlight was being the line-up producer for Perth’s nightly news which is produced in Melbourne. Prior to his current role, he was a researcher in the newsroom at Channel Nine.