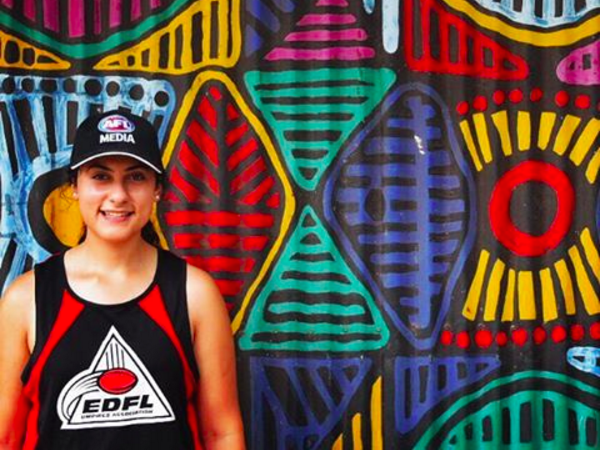 M.C Escher’s ‘Relativity’ is timeless. It portrays endless walkways and doors, a world where gravity or physics has no place and the possibilities of movement are endless.

What stands out in a Skype conversation with Nadine Rabah is that her ambitions are a bit like Escher’s visions of an orderless landscape – sprawling and undefined.

She speaks of following up to her first novella, one day getting back into media work, organising herself for a shot at eventual participation in the women’s league and the end goal of being on the AFL’s executive.

And none of it sounds starry-eyed or ridiculous. Nadine says these things not with brash confidence, but a matter of fact, positivity. These are things that could happen if I keep working hard and remain focused.

The scheduled interview time (beyond 9-5 work hours) ran forty minutes late, as she’s still sorting through things for her current day job as media manager for the AFL Northern Territory. She’s overly apologetic and mocks the inability of Skype downloading fast enough to her phone to break the ice.

Rabah went to Mercy College in Melbourne’s workshop heavy northern suburbs, tossing up in the early days whether to study law (as her parents quietly encouraged) or journalism. She enjoyed writing and one day that flair for words created real world sparks.

”I think I was in Year 10 or Year 11 we had for our English subject [called] ‘identity and belonging’, and we had to deliver an oral presentation on our journey – who we are and what makes us that.

“It was about a ten minute oral presentation on who we are and why that is.  And my English teacher at the time, she was crying at the end of it, which was a bit confronting for me and she just said it was the best thing she’d seen in her 30 years of teaching .”

That visceral moment led to her teacher encouraging her to get her work out there – a push toward the outside world. She published a few articles about her experiences in Eureka Street playing junior footy as a girl and growing up in a society that has an air of uneasiness towards the Muslim community.

Most origin stories have you believe things play out in a rolling, linear fashion. But careers and purposes tend to play out in short and momentous lurches with glacially paced gaps in between.

Two years later, Rabah was juggling umpiring in the Essendon District Football League (EDFL), her job at a sports store and her stressful VCE studies.

Then, destiny calls. It literally calls her school’s front office.

“The day before my politics exam in year 12, I received a phone call from a receptionist at my school, and she said to me publishers had called the school asked whether you’d like the opportunity to write a book. My reaction was pretty much ‘wow’.

“And we got chatting and they [the publisher] had read the piece that I had published (which was the oral presentation that I’d presented) in the magazine, and thought that it was an interesting story and asked me if I’d like to flesh it out into a story or a book.”

In her own words, the novella ‘Jaiyana – Best and Fairest’ is based on her football story.  A tale of a young girl from a Lebanese/Muslim background who wants to play footy, but has barriers from her immediate family and the community placed in front of her.

Rabah references her Lebanese heritage and parents regularly, speaking of the traditional notions migrant parents have for their children – concern for a good education, a steady job and sometimes confined gender expectations.

Which isn’t to say that Rabah antagonistically rebelled or made out family had oppressively stood in her way. She has taken on their loving concern and confidently proved to them things will play out on her terms.

An excerpt from one of her Eureka Street articles confirms this:

Today, instead of frowning, many older [Lebanese] men and women ask me how my footy is going. Or they say ‘So, I’ve heard you’ve started umpiring – you gonna make it to the AFL one day?’ They are also full of praise to my parents. I was told that I am a pioneer to many Lebanese and Muslim girls.

Nadine’s story is reminiscent of Escher’s ‘Relativity’ in another way – the different winding threads and possibilities are also energy sapping to keep track of.

Her umpiring commitments – which she concedes have been on the back burner recently – writing and most importantly, work at the AFL.

She contacted AFL Victoria while she was at La Trobe studying Sports Journalism, with “grand ideas about teaching refugees and asylum seekers or newly arrived migrants football.”

AFL Victoria were already running programs and she became one of the league’s first Multicultural Ambassadors, which then led to her becoming a Casual Game Development officer. It involved running football programs and delivering the development section of the AFL at schools and Auskick centres.

In 2014, she was given the Women’s Emerging Leader award at an event hosted by the Essendon Football Club and the AFL.

As more time and acclaim went by, and she became the first ever intern at AFL corporate affairs and then offered a short-term opportunity managing the league’s message in the Northern Territory.

“Originally, it only started as a temporary job. I was only filling in as a media manager until they had hired one for six weeks. Then they asked if I could stay on and it was too good of an opportunity to miss,” Rabah says.

“Just to fast track my development from a career perspective and my parents didn’t take it well,” she says, laughing.

All of a sudden the girl from Coburg was in Australia’s red centre.

“The football was different. It was hot, I come smack bang in the middle of their season. Not many people know that the Northern Territory football leagues actually run from about October until March, so in our [Victorian] off-season.”

The vibe she describes is community football being played on elite venues, such as TIO Stadium and Palmerston City Oval.

“It’s different, because it feels I’m about 10 years back, it’s a real community feel. Bit of bush footy about it as well and the women’s element is exploding like crazy up here, which is awesome to see.”

So for someone putting every waking minute into spreading the game and enabling cross-cultural harmony within it, how does she feel about that work being challenged?

In a paradigm of individuals taking Islamophobic banners to games and booing Adam Goodes out of football, Nadine was very composed in her response. Searching and finding right words in navigating an issue that is a thorn in the side of the league.

“Honestly I think it’s a very, very small minority of football fans who let us down. I mean the banner people weren’t even football fans, they were just using football as a platform to send their message out.

“Me personally, I genuinely believe Australia is such a welcoming, respectful and peaceful country. And we saw it when Waleed [Aly] got the Gold Logie, how much support and positivity there was around it,” Rabah says.

“Look, I’m not one to dwell on the negatives, we can only control what we do and the work that we do, and how people respond is really more a reflection on themselves rather than us.”

There it is again, that iron clad will. We can only control what we do.

“I’m confident in the multi-cultural programs and the difference that those programs are making at a community level. We’re seeing the reflections at the AFL level,” she says.

“We’ve got five Sudanese players on an AFL lists, more will be coming through and I reckon there will be more players of an African background than in the next five years than any other non-Anglo backgrounds.”

It would be understandable to focus on the scarcity of ethnic backgrounds in the AFL, but Rabah sees the bigger picture. My work will influence the outcome.

And it’s not arrogance. It’s life-affirming to hear people on the front lines backing their capabilities, rather than concede the deck of society’s cruelness is stacked against them. It’s a firm outlook of positive leadership that’s recently deserted us in politics, business and the community.

Her positive experiences when umpiring underscores her sunny outlook and preference to look at the goodwill the game can deliver.

“I did notice that the footballers treated me with a lot of respect, I never faced any abuse or copped anything from the crowd, which I’m very thankful for,” she says.

“I do know that abuse can be an issue with umpiring at times.”

The conversation turned to whether she was going to write about her experiences in Northern Territory or carry on from where her first novella left off.

“There are definitely a few things in the works; it’s just a matter of finding that time.”

But like everything she does, other commitments are standing in the way.

“We’ve got a new Women’s Lightning Series starting this week in the NT and as part of my personal job, I’m the competition manager,” she says.

“Instead of wearing the guernsey where they don’t fit us properly, we’re going to have different designs and they come in at the back.”

Rabah winds back and concedes that despite not being able to indulge in her own creativity, the work she’s doing is just as important.

“Even though I’m missing out on my personal projects of writing, I think the projects that I’m working on for the greater good of the game are worth a little bit more,” she says.

“The other stuff can wait a little bit.”

All views expressed in the article are that of the individual and not those of the AFL.