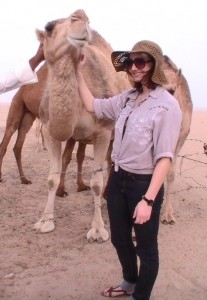 ‘I didn’t really ‘choose’ journalism – it sort of just happened. I wanted to be a professional dancer but was seriously injured within the first six months of my career. Luckily, my high school teachers and parents had suggested applying for uni and deferring, just in case the dancing didn’t work out (I don’t think they were particularly understanding and supportive of my decision to dance).’

Journalism was just one of many courses that Kelly applied and was accepted into, but it was the one course she chose to return to after her dancing injury and it is a decision that she does not regret.

‘I’m very glad I did [choose the course] because I loved studying journalism and found an occupation where I get to do my favourite thing in the world – talk to people and hear their stories. The course helped me prepare for a career not only in the news media but also in PR and communications, which helped me gain a very broad skill set.’

Kelly, who was also one of upstart‘s previous editors, left her degree wanting to travel to France to continue her studies. This dream lead her to make the move to Birdsville – an outback town in central west Queensland, on the edge of the Simpson Desert.

‘I wanted to do my Masters in France and needed to save as much money as possible as quickly as possible. The fact that there’s no shops or restaurants in Birdsville made it seem like a good place to save. Plus, I was ready for a change and a challenge.’

While in Birdsville, Kelly secured herself a job promoting the town and the outback to the rest of Australia, and this new found appreciation for the outback led her to write a book for children.

‘My job in Birdsville is to promote the town and the outback in general as a tourist destination. The outback is pretty cool; unusual, interesting and rich with history and characters. While there are a million books about the outback for adults, there’s not many for kids. I’d seen a few old picture books that aren’t published anymore that are set in Birdsville and thought I should write one for the kids that visit Birdsville these days.’

Kelly’s book Onslo is the story about a Volkswagen Beetle named Onslo who sets out on a desert adventure with the encouragement his friend Geoffrey the Galah. The journey is something the other cars (the big four-wheel-drives) tell him he can’t achieve because he’s too small; it was a story that grew from Kelly’s own experience driving across the Simpson Desert in a Volkswagen Beetle.

‘My boyfriend is a VW nut and I’m up for any adventure, so we bought a 1963 Beetle (that we named Onslo) and drove it across the desert. As far as we know, it’s the first time it’s ever been done by a stock standard Beetle and there’s only a handful of two-wheel-drive cars that have ever crossed the desert. It was a pretty big deal as far as the desert is concerned, and people love hearing about it, so I wrote the book.’

A sense of adventure has also led Kelly to explore volunteering opportunities overseas – she will be travelling to Bangladesh as an Australian Youth Ambassador for Development (AYAD).

‘I got involved with the AYAD program after researching overseas volunteer projects. The AYAD program seemed like a good fit for me because I would be working in a field that I enjoy. So, I applied. My work will involve developing a website for the NGO I’ll be working for, devising a communications strategy with the aim of publicising the NGO’s activities and encouraging fundraising and community activities to benefit the NGO.’

The events of the last two years may not have been exactly what Kelly imagined they would be when she left La Trobe, but she is happy with the way things have turned out.

‘I left uni with a million ideas of what I wanted to do, although I’ve gone down a completely different path! That’s the beauty of studying journalism – there’s so many things that I can do with the skills that I learnt at uni that the options are endless.’