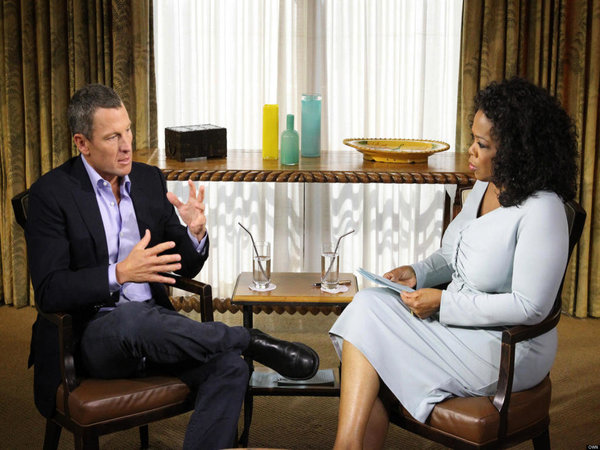 Armstrong had spun the greatest web of lies in sporting history, and it was left up to Oprah Winfrey to untangle it.

The disgraced cyclist’s tell-all interview, broadcast in 2013, addressed the shroud of rumours and controversy that had dogged Armstrong for much of his cycling career.

What lay beneath wasn’t pretty.

Oprah opened her examination with a barrage of questions, only allowing room for yes or no answers.

Unable to skirt around the truth, Armstrong admitted to using EPO, blood transfusions and other banned substances during all seven of his tour victories.

At this point, Armstrong also admitted to one of his most critical self-appraisals of the interview – that he was a bully.

However, Oprah’s open and long-winded questions were often unsuccessful.

Despite promising to respond “directly, honestly and candidly” with “no conditions”, it was clear that Armstrong had prepared at length for the interview. He repeatedly fell back on a safety blanket of organised responses when allowed room to manoeuvre.

Armstrong was unwilling to implicate others in what the United States Anti-Doping Agency (USADA) described as “the most sophisticated, specialised and successful doping program”.

With the preamble that “it is hard to talk about some of these things”, Armstrong responded by saying Ferrari is a good man.

Oprah was harsh in her interrogation of Armstrong, asking if the cyclist was skirting around the truth with semantics.

Armstrong assumed a clinical detachment throughout most of the interview, smirking as he stated that he was a “deeply flawed” individual.

He spoke without discomfort as he recalled the nuances of scheduling, and how easy it was to implement the program, pinning his transgressions on a “win at all costs” mentality.

Armstrong appeared apologetic, but untroubled by his actions. He said that he viewed cycling as a level playing field at the time of his drug use.

In a testament to Oprah’s skill at interviewing, she managed to break through his cold exterior and elicit an emotional response when asking how the scandal impacted Armstrong’s young son, Luke.

Oprah asked Armstrong four times how he told Luke about his transgressions, and the visibly distressed cyclist admitted to telling him “not to defend me anymore”.

Following this line of questioning, Armstrong struggled to press onward while holding back tears.

Oprah almost immediately shifted from an interrogator to a motherly figure, as she waited in silence for Armstrong to continue.

The interview was long and wide-ranging, so much so that it was aired on two separate nights.

Oprah’s preparation was impeccable, revealing that she had read all 164 pages of USADA’s report on Armstrong.

She paid close attention to detail, and exhibited a firm grasp on the subject material, particularly when clarifying Armstrong’s claim that he didn’t dope after his return to the sport.

This long-awaited interview put the final nail in the coffin of one of the most incredible stories in the history of the competition.

David McPherson is a first-year Media and Communications (Sports Journalism) student at La Trobe University. You can follow him on Twitter here: @dpmcpherson10.