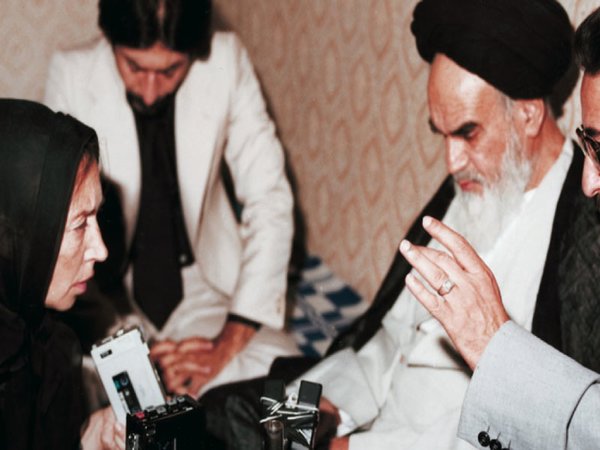 Her controversial interview with Ayatollah Khomeini, the leader of the Iranian revolution, demonstrated her ability to humanise and downplay former ‘god-like’ revered individuals.

Fallaci’s uniquely aggressive and tenacious method of interviewing is a rare sight in the modern world.

The interview, published in the NY Times in October 1979, shows how bravery and nonchalance, in the face of pure evil, can lead to an engaging and historical result.

The interview couldn’t have come at a better time.

Iran was unstable; a young Islamic government was trying to find its feet. At the time, a significant number of people were doubting the new regime, while others regretted the revolution.

Questions were plaguing the public, but most were too scared to speak out against the brutal dictatorship that had overrun the country.

Fallaci brought these concerns to the attention of their omnipotent religious leader.

She was the voice of the people, bringing up issues such as communism and the execution of Kurdish minority groups.

It had similarities to her interview with Colonel Gaddafi, in which she so bluntly asked: “Do you know you are so unloved and unliked?”

Fallaci doesn’t hold back. She criticises the Iranian revolution in just her second sentence.

“There are many in your country who say that in Iran there is no freedom, that the revolution did not bring freedom,” she said.

Despite Khomeini’s calm, collected demeanour, Fallaci’s verbal blows come one after another, at one point referring to him as a fear raising dictator.

She brings up the chador, a religious covering made compulsory for women following the revolution.

“If you do not like Islamic dress, you are not obliged to wear it,” Khomeini said.

Fallaci famously replied: “That’s very kind of you Imam. And since you said so, I’m going to take off this stupid medieval rag right now!”

Fallaci’s unusual, confronting manner evoked an un-seen side to the dictator.

After this heated exchange, Khomeini’s son confided in Fallaci that this had been the first time in his life he’d seen his father laugh.

Following this outburst, she regains her composure and continues the interview calmly.

However, this persistent and precise method of interviewing was not done on the fly.

Fallaci has admitted to obsessively researching her talent before interviews, often writing entire essays about them before meeting them.

Like most of the journalist’s interviews, the piece is riveting and engaging.

She was perhaps one of the last journalists to ask such intrepid questions to some of the world’s most powerful and deadly men.

In the modern world, celebrities and world leaders often condition the manner in why they are interviewed. This aspect was absent from Fallaci’s interviews, as she always appears to be in control.

Fallaci’s assertive, at times brash statements and assumptions, make for an enthralling interview.

The reader can be entirely hypnotised as she appears to hold one of the world’s worst dictators, a man often compared to Hitler and Stalin, on the ropes.

Shahin Mehrkhavari is a first-year La Trobe student, studying a Bachelor of Arts. You can follow him on Twitter: @shahanshahin.