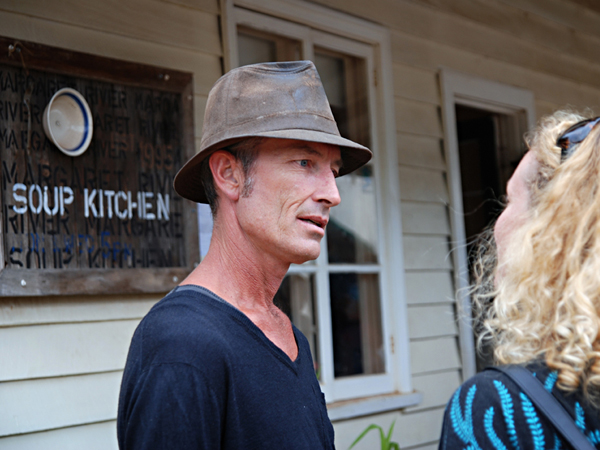 In Augusta we chat to Kevin about his experiments with bush regeneration and his old car, which he has converted to run on used deep frying oil. Then we’re off to meet Dave Seegar at the Margaret River Soup Kitchen.

We first met Dave during a visit to a local winery in Margaret River, where his band Four Bean Mix was providing the entertainment. It was the manager of the place who put us on to him and told us about the soup kitchen when he heard about our odyssey.

See our photos from episode 14 here.

The “Soupie” has been going since the 90s. Dave told us it was his response to the musings of a grumpy old man that came to town as the editor of the local newspaper. In his first editorials, he had expressed concern that the town was full of “ferals and hippies” and that he thought Margaret River needed to be above that. What this news editor didn’t realise was how closely connected the local community is, and the importance of those he thought were “undesireable” for the local industries.

‘Margaret River is a small town with a cosmopolitan attitude,’ says Dave.

‘People here like that we’re all different and the community is accepting and inviting. It’s a great place to live.’

The community sings praise for the man who started the weekly vegan feast.

‘It’s always a great meal, and it’s a great place to catch up. You can let the kids run around. There are always plenty of other kids to play with and it’s very social for the rest of us too. I come here as often as I can,’ a local mother of three told us.

In late 2012, Dave and the soup kitchen received an official acknowledgement for their efforts, as a finalist in the Prime Super Community Group of the Year Award at the 2012 Regional Achievement and Community Awards.

If you visit Margaret River, make sure to try the communal dining experience. The Soupie is on every Monday and Wednesday at the community centre.