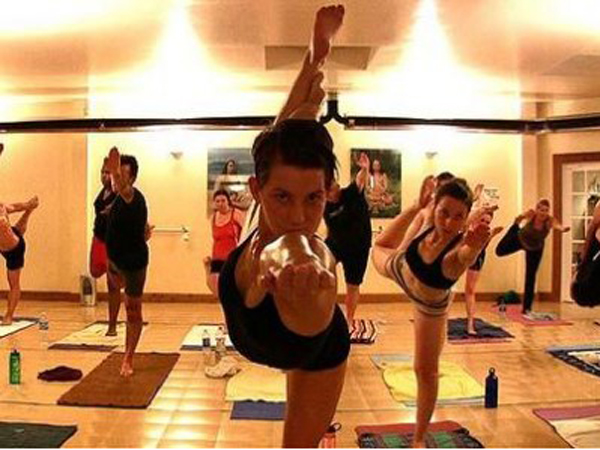 The word ‘yoga’ was once synonymous with comfy clothing, soft exercise mats and soothing music. It was the class on the gym’s group exercise timetable that you took when BodyPump looked far too taxing.

However previous assumptions may need to be re-evaluated. There’s a new kid on the yoga block, adding some heat to the usually mild-mannered activity.

Bikram Yoga, created by former Indian yoga champion Bikram Choudhury, is the latest form of yoga that has people across the globe, quite literally, in a sweat.

Also commonly referred to as ‘hot yoga’, the practice takes place in rooms where temperatures are usually set at around 39 degrees. Participants are guided through 26 different poses and breathing exercises. 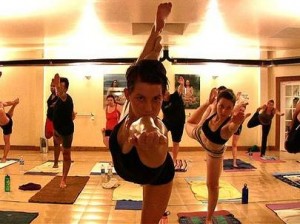 According to the Bikram Yoga studio in Melbourne, the practice boasts numerous health benefits, including weight loss and reductions in stress, as well as adding strength and tone to the body.

Fans of the practice preach that a 90-minute session in intense heat will elevate heart rate, prompting the body to work harder, while also allowing the body to relax deeper into stretches.

Sounds like a pretty easy path to a new-and-improved you, right? Not necessarily.

Dennis Hemphill, associate professor of Sports Ethics at Victoria University, says that there are significant risks associated with exercising at increased temperatures.

“When body temperature goes up, so does blood pressure, which can run the risk of dehydration,” Professor Hemphill tells upstart.

“It is said that the warm environment increases blood flow and circulation into the muscles, but that seems to be the only real rationale for it […] On a day to day basis when you’re doing office work in forty degree heat, how long would you be able to actually sit there?”

Whilst the practice is advertised as a form of physical activity for all, Professor Hemphill questions whether or not bikram is in fact appropriate for the yoga novice.

“If you’re a beginner, you really must ask the question of whether or not 90 minutes of any physical activity is appropriate,” Professor Hemphill says.

“In other forms of physical activity, beginners are usually encouraged to start off slow and easy, and focus more on making sure the exercise is done properly, then gradually build up the time and intensity.”

Mother and daughter duo, Jacqui and Kathryn Pepper, decided to give the class a go, and had mixed experiences.

The pair paid for two months worth of classes, however only managed to stick it out for six sessions.

“I’d heard positive things about Bikram yoga before, that people really enjoyed the ‘sweating’. I personally did it to sculpt my body as it’s meant to help tone,” Jacqui tells upstart.

However it was the unbearable heat that was the ultimate deterrent.

“Initially, it made me feel really sick. The next few classes it started to get a bit better, but it was very hot. If you had a nice instructor, they’d open the door occasionally and let cool air in,” says Jacqui, “It was an uncomfortable experience overall.”

Kathryn, a regular ‘yogi’, said that whilst she’s been taking classes for years, she wouldn’t recommend this form of yoga to others.

“I think I prefer other yoga classes, because this class is an hour and a half, and each time you go, it is exactly the same program.

“I prefer regular yoga, because teachers can change things up and honestly, you don’t get as sweaty, making the whole process easier to fit into your  everyday lifestyle.”

But should we be placing Bikram Yoga in the ‘crazy fad’ basket, along with other extreme workouts like Prancercise, shake weights and flex belts?

Maybe not just yet. Professor Hemphill thinks that with the right precautions, people can enjoy the experience.

“You would expect teachers would encourage participants to take fluids while they’re doing the activity, and not an hour and a half later, or else it is completely counter productive,” he says.

“If you become dehydrated, you’re muscles can’t function and contract properly. Fluid intake before, during and after would be absolutely essential.”

However if it’s weight loss you’re after, Professor Hemphill recommends alternative methods that won’t leave you a dripping mess.

“Traditionally, doing low intensity continuous activity for at least 30 minutes, such as walking, really gets that fat metabolism occurring.

“[At Bikram yoga] you’re not moving the muscles in the same way; you’re holding the body in positions rather than overcoming gravity and moving through space.”

Perhaps the craze isn’t for everyone. But if you’re looking for something new, apparently laughter yoga is a thing. And in anyone’s book, a giggle trumps a heavy sweat any day.

Jacinta Newbold is a third year Bachelor of Journalism student at La Trobe University and is the deputy editor of upstart. You can follow her on Twitter: @jacinta_newbold.