After the controversy and deactivation of 'Hotties of Melbourne Uni', Caitlyn Leggett looks into the hotties pages at major Melbourne universities. 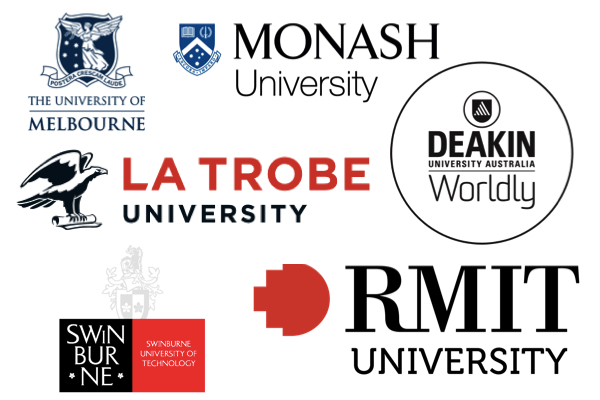 Usually, getting branded a hottie by your fellow comrades would be considered a compliment. However for students at Melbourne University it has been quite the opposite.

Over 23,000 people recently signed an online petition to have the ‘Hotties of Melbourne Uni’ page removed from Facebook after a spate of nasty comments, with some even using hunting metaphors.

Photos of unknowing students were posted without consent and captions included personal information and events they were attending so other students could attempt to ‘pick them up’. 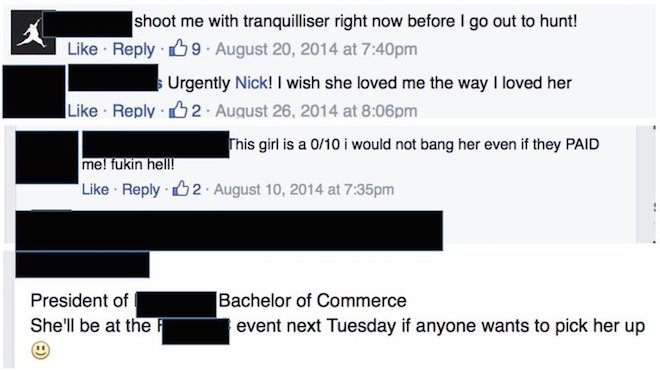 The ‘Hotties of Melbourne Uni’ page had no link to the university itself, and has now been deactivated.

Despite it being unclear whether Facebook or the page’s administration made the decision, the result has prompted an ongoing conversation about similar university pages in Melbourne.

La Trobe, Monash, Deakin, Swinburne and RMIT Universities all have their own ‘hotties’ pages, but do they ‘allow rape culture’ like Melbourne’s did, according to the petition?

Find out where your university stands.

Hotties of La Trobe Uni has over 3,500 likes and posts photos of students infrequently.

“If anyone is not happy with being on the page of course we will remove the post,” she tells upstart.

Amy says the page posts photos of both females and males and is not intended to objectify women.

“The La Trobe page has admins of both genders and I wouldn’t stand for any kind of predatory behaviour on this page,” she says.

“It’s more of a light hearted page of appreciation for students and mostly people get a bit of a laugh out of being featured, but it’s barely active anymore.” 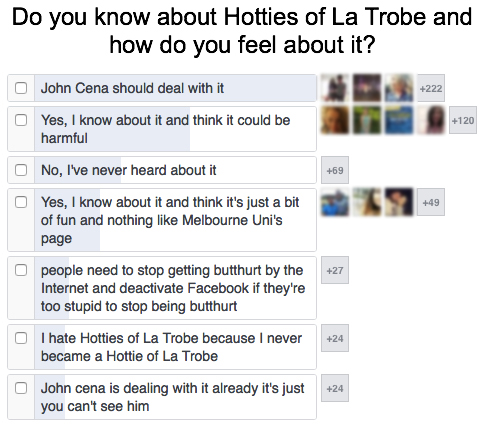 A survey posted on a La Trobe University community Facebook page showed 50 per cent of serious voters said they knew about the Hotties of La Trobe page and think it could be harmful.

Some 20% said they thought of the page as just a bit of fun and 29% of students had never heard of the page.

Although 222 students seemed to agree with a student-added answer that John Cena should deal with it. He’s currently not returning upstart’s calls.

La Trobe students shared their wavering opinions in the comments section, with some saying the page seemed harmless.

“From what I see on the La Trobe page, no one is being vulgar or encouraging any sort of rape in the comments, unlike what was seen on the Melbourne page,” Izzy Sampson comments.

“Regardless of what you think about the nature of the page, objectification, sexualisation etc, the idea of posting images of non consenting people on a webpage doesn’t sit well with me,” Hugo McLachlan says.

Sarah Taroza says the existence of a page that objectifies people like this is “by definition, dangerous”.

“There are always a few strange, unpredictable or creepy people who may try to actually stalk or take advantage of someone,” she comments.

Hotties of Deakin Uni has just over 900 likes and hasn’t posted a picture of a student in almost two years.

Only ten photos of students were posted after its creation in June 2014 and comments and captions seem harmless.

Although barely active, admin were quick to reply to questioning.

Admin member Adam* says students have to send photos in before they are posted and disagrees with the page encouraging bad behaviour.

“To even insinuate that western civilisation has the possibility of being a ‘rape culture’ just shows how useless your arts or gender studies degree was.”

After the controversy over Hotties of Melbourne Uni, Hotties of Swinburne decided to change the page’s nature to promote a better culture.

In April this year, students on Swinburne’s ‘Stalkerspace’ Facebook page encouraged its return.

Annie*, one of the page’s admins, says it was made for a bit of a laugh for a localised community.

“We have seen extremely rare inappropriate comments which we remove as soon as we know they are there, but often the comments are from people that the featured person knows,” she tells upstart.

Annie says they have had a number of requests to have pictures taken down and they always comply.

When it comes to privacy, the page only accepts submissions of photos that are visible to the public on their Facebook page.

“If it’s a personal picture, we will request a publicly available one and if they don’t wish to provide one we don’t post the image of the person,” she says.

“We’ve rejected probably 20 submissions on that basis or on the basis that we can see that the image might be considered embarrassing.”

Highlighting the social issues, Annie says these ‘hotties’ pages aren’t the only Facebook pages that could violate privacy or be considered inappropriate.

“What does that say about the hypocritical stance around the university pages called STALKER space, where the original idea was to take photos of people without their consent and upload them to the group, which still happens, so why is there no outrage around that name and concept?” she asks.

“I find it entertaining how many people pulled the privacy card when many of them on Tinder allow people to decide their worth based on swiping left or right on pictures of themselves.”

Hotties of Monash University’s page had over 12,000 likes, just short of the 13,000 likes Melbourne Universities page had.

It was removed after the university complained to Facebook to take it down.

With almost 5,000 likes, the Real Hotties of RMIT University is the largest page after the removal of Monash & Melbourne’s.

Posts of both male and female seem to be sent in by friends with funny tag lines and harmless comments.

One funny guy appears in almost every post asking, “does she squat though?”

Stumbling upon a ‘Hotties of Melbourne University’ page came as a bit of a shock.

It was created in April 2016 – around the same time the old page was shut down.

It has only garnered a few hundred likes and the page’s admin declined to comment.

Well I assume they declined. I was blocked.