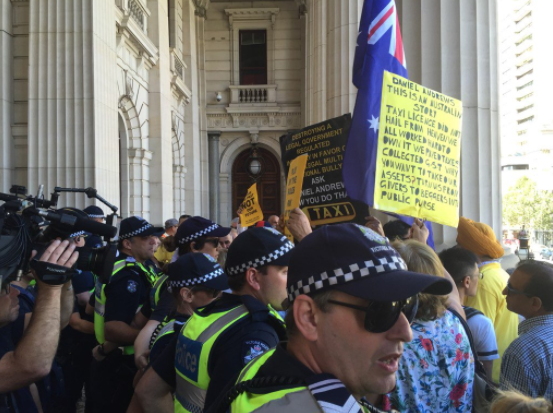 Five people have collapsed and up to 100 people have stormed the Victorian Parliament as tensions rise over proposed reforms in the taxi industry.

Police attempted a barricade around Parliament to stop the protestors from entering.

Wild scenes at parliament with angry taxi protesters trying to get into the building. Screaming, yelling. #springst @theage pic.twitter.com/Fxh8GEnshz

Taxi protest organisers attempted to calm the crowd by singing the national anthem and Cabbie Lou, who was heralded for his actions at the Bourke St tragedy, joined the effort by taking the microphone.

“You need to calm down. Nothing is happening. Everybody calm down.”

The protest came after the Victorian Government proposed a buy-back scheme to compensate taxi license holders.

Sandy Spanos is a taxi driver who will be affected by the proposed buy-back scheme.

“People are committing suicide and dying because of this, my kids are going to inherent a legacy debt.. We’ve lost everything that we’ve worked for and I’m tired of it and just want to live my life.” Mrs Spanos had previously told news.com.au.

This is happening while thousands of workers march across the city in protest of new building codes and the proposed penalty rate cuts.