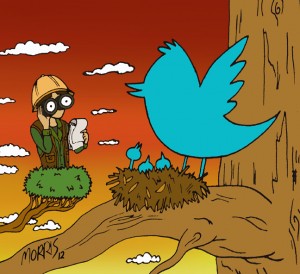 Social media is continuing to change the way we ‘do’ journalism. And indeed, the way we teach it.

While it’s true that the fundamentals of journalism practice haven’t changed – the ability to write, recognise and tell a story, be fair and objective etc – the platforms which we carry out such activities have.

Social media, and in particular Twitter, has changed how journalists report on unfolding events around the world and is proving to be a vital tool for journalism; and therefore, vital for journalism students to understand.

So here at upstart, we’re on a mission to compile a ‘must follow’ list of Twitter users for emerging journalists.  This will be a mix of journalists, journalism academics, news organisations and the like.

We’re under no illusion that we can compile an exhaustive list, but we’d like to think that we’ll be able to get to 100.

We’ve kicked off the list with 10 of who we believe are a good starting point for emerging journalists, and have started getting suggestions via Twitter and comments below.

But we need your help to get to 100.  Drop us a line at contact@upstart.net.au, or tweet us at @upstartmagazine.  We’ll be using the #mustfollow hashtag on Twitter.

You can nominate whoever you like, but must make a clear case as to why the Twitter user is a ‘must follow’ for an emerging journalist.

1. upstart magazine (@upstartmagazine) – We are the magazine for emerging journalists. It’s no surprise we’re engaging in an act of shameless self-promotion here, but we’re often running posts on job and internship opportunities for emerging journos.  That, and we’re great.

2. Andy Carvin (@acarvin) – Andy is a social media strategist with NPR in the US.  He made contacts in Tunisia and Egypt during the start of the Arab Spring uprisings.  He’s one of the journalists that’s changing the way we report on unfolding events using social media.

3. Mark Colvin (@colvinius) – Mark is the presenter of PM and Friday Late on ABC Radio.  He uses information from Twitter with ‘old fashioned journalism and researched‘.

5. Anthony de Rosa (@antderosa) – Anthony is the social media editor for Reuters.  He tweets on breaking news, amidst other things.

8. Jay Rosen (@jayrosen_nyu) – Jay is a professor of journalism at New York University.  He writes and tweets on new trends in journalism.

9. Matthew Keys (@producermatthew) – Matthew is the deputy social media editor at Reuters.  His tweets speak for themselves.

10. Greg Jericho (@grogsgamut) – Greg is a blogger on politics, who was originally an anonymous tweeter before being famously outed by The Australian.

11. Julie Posetti (@julieposetti) – Julie is a journalist and academic whose work focuses on the use of Twitter and other social media in journalism.

12. Annabel Crabb (@annabelcrabb) – Annabel is the ABC’s chief online political writer.  She tweets about Australian politics.  You should also follow @CrabbTwitsard, which is the account Annabel uses when federal parliament is sitting.

13. Latika Bourke (@latikambourke) – Latika is the ABC’s political and social media reporter based in Canberra.  She tweets on federal politics, breaking news and Question Time.

15. Dave Earley (@earleyedition) – Dave is the homepage editor of The Courier Mail.  He tweets about….well, everything really.

17. Joe Hildebrand (@joe_hildebrand) – Joe is a journalist with The Daily Telegraph.  He tweets interesting articles, as well as his opinions on most current issues.  According to our upstart reader who commented below, his ‘views on pretty much everything causes a level of controversy’.

18. AM, PM and The World Today (@amworldtodaypm) – This is the account of the ABC’s three flagship radio current affairs programs – a must-listen for emerging journalists.

19. The Guardian style guide (@guardianstyle) – This is the account of The Guardian’s style guide team.  Even if you don’t use this particular style, it’s worthwhile following this account, as they’re often commenting on grammar, commonly confused words and the like.

20. Benji Lanyado (@benjilanyado) – Benji is a freelance journalist and digital producer for The Guardian and New York Times.  He tweets frequently on new trends in journalism, particularly in social media.

21. George Megalogenis (@GMegalogenis) – George is one of the most respected journalists in Australia.  He spent eleven years in the Canberra press gallery before returning to his hometown of Melbourne where he was based at The Australian.  He’s now a full-time author.  His latest book, The Australian Moment, canvasses Australia’s economic achievements, particularly during the global financial crisis.

To keep up with all of the above, see who’s been tweeting what on our ‘must follow’ list.