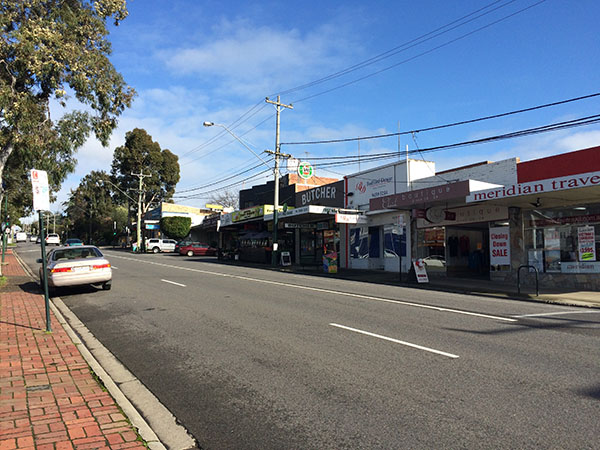 Local businesses in Rosanna Shopping Village are worried they won’t be able to survive if Woolworths and Banyule Council have their way.

Banyule Council, who didn’t respond to requests for comment, approved the development of a Woolworths supermarket to be built on the site of the Rosanna Shire Offices, which are due to be demolished after the council move to their new offices in Greensborough in January 2017.

But many shop owners are worried the unique character of the shopping village will be lost if Woolworths moves in.

Susan from Rosanna Village Fruit n Veg Supply says that many businesses in the Village will be affected if Woolworths gets their way.

“It will ruin the atmosphere of the area. It won’t feel like a village anymore,” she tells upstart.

Susan says the limited number of parking spaces is also a concern in the Village and that the parking provisions provided under the new plans may not be enough.

Rosanna Village, located on and around Lower Plenty Road, consists of over 75 local businesses, some of which have been in the area for many years, including the Rosanna IGA Supermarket, which has operated under different owners for at least three decades.

Jay Chhanabhai, owner of the supermarket, says that it is unfair competition if Woolworths takes up residence in the Village.

“There is no way a small store like this one can compete and a lot of businesses in the area will die out,” he tells upstart.

“Council is supposed to represent small traders, instead they are supporting the big traders,” he says.

“We’ve got a Council that doesn’t care.”

The site of the proposed Woolworths is situated on Turnham Avenue, directly opposite Rosanna Railway Station, and has the Rosanna Library and the Heidelberg Theatre Company on either side.

The development was officially approved at a council meeting on June 27 this year. Over 200 local residents attended the meeting and 15 spoke, including State Member for Ivanhoe Anthony Carbines, whose electorate office is located in the Village.

Strong public opposition has been led by local residents who started a petition which has now gained over 1,100 signatures.

One comment on this petition read: “Rosanna is a village suburb whose landscape does not include large commercial sites. Residents deeply appreciate the village and park atmosphere. A large Woolworths would drastically change the landscape overlay detrimentally. Access to large supermarkets is readily available. We do not need or want an industrial site in the centre of our village.”

Another read: “This development would be fundamentally detrimental to Rosanna. There is a real sense of community that the strip shopping centre and the library bring to the area. By plonking a great big supermarket in this quiet street would be a disaster. Traffic, noise and pollution would increase and parking in the area would be impossible.”

Some businesses in the Village have had the petition available in store for local residents to sign, including the IGA Supermarket and the Fruit and Veg store.

The decision will now be heard at VCAT.