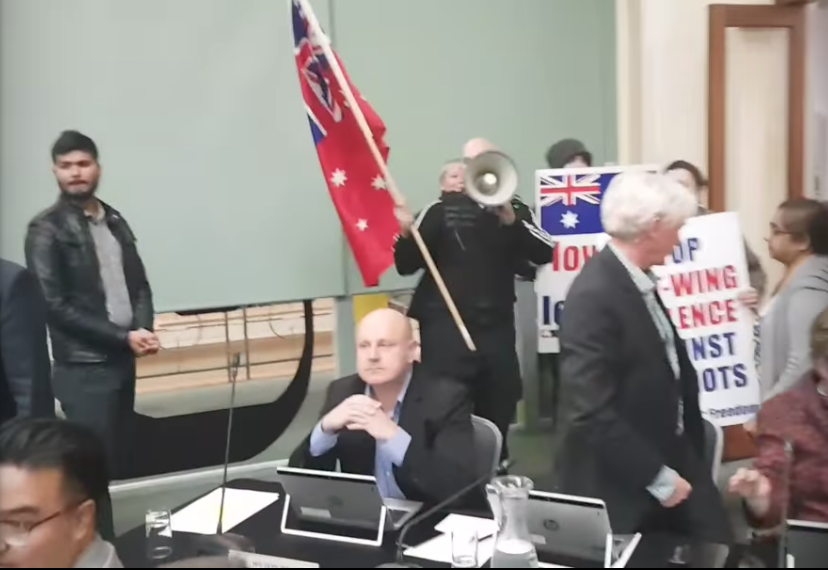 Nine protesters interrupted the City of Yarra meeting at Richmond Town Hall, just after 7 pm on Tuesday. The group was carrying megaphones, Australian flags, and signs reading “Love it, or leave it”.

Yarra Councillor Stephen Jolly said the group arrived in the chamber just after the council had passed a motion to commemorate the life of Labor MP Fiona Richardson, who recently passed away.

“It was a really touching moment and they completely destroyed that,” he said.

“Rather than come along and speak in public question time like everybody else, they attempted to shut down the democratic process.”

Neil Erikson led the group, made up of members of the Party for Freedom, mere hours after being convicted for his role in a mock beheading, as a protest to the Bendigo mosque.

Erikson filmed Tuesday’s protest, and has uploaded the footage to YouTube.

Cr Jolly said the protesters only stayed in the chambers for a few minutes, leaving before police arrived.

“We refused to be intimidated and we continued with the meeting after they left,” he said.

“No matter what they were about, we will not accept that.”

City of Yarra last month voted to cease all Australia Day activities out of respect for Indigenous Australians, and forgo it’s Australia Day citizenship ceremony with an event to acknowledge the “loss of Indigenous culture”.

The controversial decision also saw the Council vote to officially support the ‘Change the date’ campaign.

The vote caused a political backlash, Prime Minister Malcolm Turnbull labelling the decision as “utterly out of step with Australian values”.

The City of Darebin voted to follow the neighbouring Yarra Council’s lead in moving Australia Day events, despite the Turnbull government’s warning that it may be stripped of its rights to conduct future citizenship ceremonies.