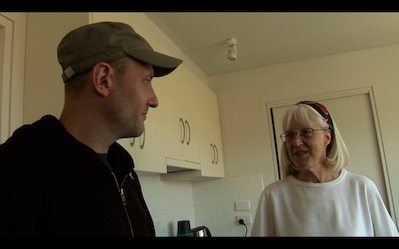 I always expected this project would be a challenge. Apart from the foundation of factual storytelling, all the components of the project were, and still are, fairly new to me — from coping with the outback climate and combining work and travel, to telling stories in sound and moving pictures.

Editing Episode One was a reasonably relaxing job. I had 80 hours of footage at my disposal to tell a short story that introduced the documentary. This was plenty in order to write the episode the way I wanted to tell it, and to then add and overlay appropriate clips to visualise the story.

Scripting and editing Episode Two – which you can watch below – was a very different experience. These are some of the issues encountered when putting it together.

Keeping it short and sweet

The main challenge was to keep the narrative ‘short and sweet’ while capturing the essence of Aldinga Arts EcoVillage. There were so many things I wanted to include; more background, more history. I wanted to show the concepts of permaculture and say more about the features in the village.

Australians Bill Mollison and David Holmgren developed the science behind permaculture in the 70s, and it has since become a worldwide movement that is still growing. In brief terms, permaculture aims to create long-term sustainable human dwellings designed on the premises of the surrounding natural landscape — by caring for the earth, caring for people, and creating a surplus that is fed back to the first two principles.

As Mr Mollison says, ‘Though the problems of the world are increasingly complex, the solutions remain embarrassingly simple’.

Check out an image gallery from the village here

One thing that I omitted from the community’s permaculture design was their own sewage treatment plant, which they use to irrigate the surrounding woodlands and some agricultural areas.

I also decided to cut the material on how their passive solar homes generate so much power that many of the residents are, in fact, in credit with the power companies. Beyond the obvious use of solar panels, this is a result of careful attention to how their houses are oriented towards the sun (north), and what building materials they use.

These things weren’t omitted because they were overlooked. Rather, it was done because I wanted to spend more time with one of the interview subjects, where the audio was good enough for her to tell the story — see note on sound below. We had done a solid interview with one of the villagers, Elizabeth Heij — the focus then became her experience and history in the village, and providing a quick tour of the house.

In the end, the purpose of the episode was to set the scene and represent the surroundings and the collective philosophy behind this intentional community — hopefully leaving people wanting to know more.

Whether or not this was successful, I will leave up to the viewer to decide for now.

Sound, they say, is half the film experience. This is probably where we struggled the most, technically, when we were shooting. Throughout our trip, much decent footage was destroyed by the sound of wind.

We travelled with two sub-par microphones. One came with the camera on which we shot most of the film; the other, a borrowed boom mic, lacked a good windsock (we couldn’t afford to hire or buy wireless lapels). Certain things I wanted to include in the narrative of Episode Two had to be worked around. Some points were summarised in narration, while others were omitted entirely.

The boom was problematic because it occasionally interfered with the ‘natural’ conversational setting, hovering above the interview subject (and the interviewer), which can be highly distracting and awkward. In our case, it occasionally entered into the frame, Ed Wood-style — although these shots have been kept out of the final edit.

I’ve realised the challenges of producing a bilingual documentary go beyond merely writing and narrating the stories in two languages — the visuals also need to work with the subtitles. In the translations, the English subtitles have been condensed in relation to what I’m actually narrating in Norwegian, to make it a bit easier on the non-Norwegian speakers to follow.

Still, some early criticism of the second episode is that too many things are going on in a couple of places, and particularly during the early split screen feature some find it hard to take it all in. Others say it doesn’t bother them.

Is this a just language issue? Or are too many things going on in the edit? And is it easier for people who don’t have English as their first language to deal with subtitles because they are more commonly used to it?

I would really love some feedback on this matter, and hope you would care to share your thoughts with me. So please leave us a comment when you have watched the episode(s).

In the next episode we’re off to Coober Pedy.

For more information about permaculture, please check out these resources:

Steinar Ellingsen is a journalist and photographer working on a practice-based PhD at La Trobe University of an online documentary series from a ten-week odyssey in Australia.