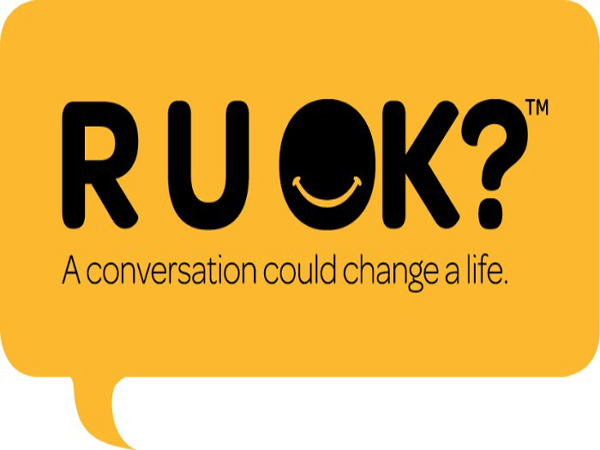 While you’re working, shopping, watching TV or even reading this article, some people are feeling vulnerable and will consider taking their own life. Many Australians have lost a loved one, a friend or someone they knew because of suicide.

Today is R U OK? Day, a national day of action aimed at reminding people to check in with family and friends by asking the question, “Are you okay?”

Suicide claims the lives of 65,000 Australians each year, an average of 6 people every 24 hours.

According to The Australian Bureau of Statistics, suicide is the biggest cause of death for young people aged between 15 and 34.

R U OK? Day was founded by advertising executive, Gavin Larkin, and television producer, Janina Nearn, and was launched in 2009 by former Australian Health Minister, the Hon. Nicola Roxon.

After experiencing the suicide death of his father, Larkin, who passed away in 2011, wanted to create a world without suicide. He said,“It’s critical that anybody who’s around those people who have lost somebody, reaches out to them and asks, ‘Are you okay?’”

The foundation’s main purpose is to encourage people to start a conversation that could save a life.

R U OK? Campaign Manager, Rebecca Lewis, says asking whether someone is okay can be more than just a casual question.

“If done with a genuine desire to understand how someone’s feeling, it could change that person’s life for the better,” she says.

“By regularly asking “Are you okay?”, we can make a difference to the significant and devastating issue of suicide in Australia,” says Lewis.

“Strong relationships with one another are closely linked to better mental health and a higher satisfaction with life,” she says.

CEO of R U OK?, Janina Nearn, agrees that “by having meaningful conversations with one another, we can build a society where everyone feels they belong and help prevent suicide”.

“A lack of connection can drastically impact on our mental health and ability to cope with adverse situations. Sad people feel so disconnected they start to think about ending their own life. It’s this sense of debilitating loneliness the R U OK? Foundation wants to eradicate,” says Nearn.

The issue of suicide in indigenous communities remains a national tragedy and Lewis encourages Australians to speak out to help prevent these deaths.

“The Australian government represents the interests of the majority. The majority, therefore, need to articulate more strongly what they want, to take action to prevent suicide on a national scale,” says Lewis.

The R U OK? Foundation works alongside other suicide prevention organisations such as Lifeline, SANE Australia, Kids Helpline, Beyond Blue, and is proudly supported by actors Simon Baker, Hugh Jackman and Jack Thompson.

For crisis support please click here, and for more information on how to ask ‘R U OK?’ click here.