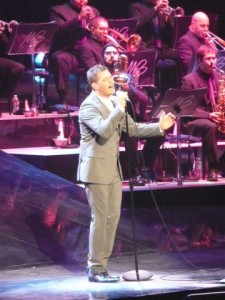 What more could you want?

It seems Australians are in love with the man that taught us to Sway with him.

Back for his eighth visit to Australia and his third concert tour in Melbourne, the big band and jazz sensation took to the stage at Rod Laver Arena last night, emerging as a silhouette figure as every woman’s voice rose two octaves.

And there he was, standing proud and confident as he began belting out Cry Me A River with a thrilling display of music, lights, fireworks and power, sending shivers down my spine.

Yet it wasn’t just his voice that left the audience impressed. It was his comical prowess. It’s fair to say as the years have rolled on and Bublé’s career has  gone from success to success, he has become more confident and perhaps even cocky, but it was his devilish wit that had the audience roaring with laughter.

Bublé made reference to the fact he was engaged to Argentinean model Luisiana Lopilato, imitating his fiancé’s accent, he introduced his band members to the audience as eligible bachelors, he signed one fan’s poster that originally read ‘I’m your Mrs Jones’ replacing it with ‘I’m a slut’, and suggested what it’d be like for a few of the guys in the audience to be involved in a ‘Bublé sandwich’, if you get my drift.

Not to mention his reference to the men in the audience, assuming they had been dragged along to the show out of sufferance by their girlfriends or wives, or because they were gay.  For fans who have seen Bublé in concert before, you might have been thinking, get some new jokes! It was obvious many scripted lines had already been used three years ago at his last concert, and comical acts with his band members were as staged as Logie Award hosts. However, Bublé in all seriousness did say that if he were to be a gay man, he would be proud of it and he would tell the world.

Bublé’s sometimes crude and crass lingo was brushed off with smiles and laughter, and if anything it adds to his likeability and sex appeal. Yet when it came to the crunch, he appeared genuinely aware and appreciative of his privileges as a singer, and he recognised the expense people had paid just to see him perform, not only for the actual tickets but for babysitters and car park fees as well.

He acknowledged the tough times Australia and Victoria had recently faced and stressed to his fans that it was his job to take them away from their troubles for just one night. ‘If you want to sing along, then sing, even if you don’t know all of the words to the songs, just go ahead and  if you want to get up and dance, then dance, and if the person behind you tells you to sit down, then just tell them to fuck off,’ he laughed.

After finishing his opening monologue Bublé, the Boob, Mr Bublé or Mickey, whatever you’d like to call him, stressed to the audience that his concert was a way to prove to the media and to his fans that despite being recognised as a modern day Frank Sinatra copy and love song crooner, his shows were purely about entertainment. And entertain he did.

Looking slick and as smooth as a gravy sandwich, wearing a grey coloured suit and rugged look to match, the Canadian superstar took charge of the stage and gave the audience a night to remember.

He sang all the hits from his latest Crazy Love album, including Georgia On My Mind and Just Haven’t Met You Yet, as well as some golden favourites like I’m Feeling Good, Me And Mrs Jones, Home and Everything. It was clear Bublé wanted to demonstrate his versatility as a performer, providing some edgy rock and pop moments, singing The Isley Brother’s Shake It Up Baby, I Got A Feeling by The Black Eyed Peas and even a Michael Jackson medley that imitated the pop legend in all manners of voice and moves. Sheer brilliance.

Fans were also given a rare glimpse into the personal life of Bublé as he revealed his childhood dreams of becoming an actor after seeing the movie Ferris Bueller’s Day Off and revealing that, unlike the expected jazz singers and classic artists whose style he reflects, he much preferred the sounds of the King of Pop, Michael Jackson.

So it seems the combination of a brilliant band with a talented and comical performer makes for the perfect night of entertainment.

And it wasn’t solely Bublé that was given a great wrap by the audience. Support band and feature group Naturally 7 proved a rare talent of acapella vocal play, impressing grannies and teenagers alike with the sounds of only their voices as they imitated individual instruments to form a band.

It’s safe to say no fan left the concert disappointed.

Never had I attended a sold out concert like Bublé’s that ignited such a sense of participation and joyousness. The old ladies in the front row mouthed the words to every song. The middle aged couple on the lower floor danced all night long and women of all ages had their hands lifted free in the air, swaying to the music and drooling over the man who transcended them by his every move.

When it comes down to it, Michael Bublé can cry me a river any day.

Sarah Baker is a La Tobe University journalism graduate and can be found blogging over at Eyes Wide Open.