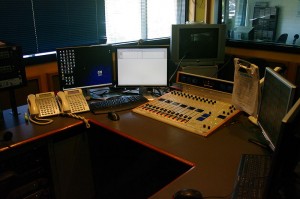 Not many graduates have the luxury of turning down a cadetship, and few would have the chutzpah to turn down two. But when Stephen Rice was offered a cadetship at The Herald at the same time as he was offered a Commonwealth Scholarship, an arts degree at La Trobe University beckoned and a career in journalism was temporarily put on hold.

After several years working on the early editions of La Trobe student newspaper Rabelais, a second cadetship, this time from the ABC, came along. Yet to finish his exams, Rice wasn’t prepared to leave university without completing his degree, but as soon as his exams were over, he received a call from a chief of staff at the ABC, who said they had kept a place for him. He began his cadetship in November 1971, and except for a brief break to travel and a short stint at Leader newspapers, he has been with the ABC ever since.

Currently the producer of Radio Australia’s Pacific current affairs show, Pacific Beat, Rice previously spent 10 years on the news desk at the broadcaster, a job he describes as ‘anti-social’ and ‘tough’.

‘You’re on a 24 hour roster, the first shift starts at 5am, then there’s the afternoon and overnight shift too. You never get public holidays and you have the constant stress of producing an updated news bulletin every hour. It’s even harder when it’s a slow news day,’ he says.

‘You’re only as good as your last bulletin so you can never relax. You have to give a top-level performance all the time.’

Asked whether he’d recommend the job to new journalists, Rice’s response is emphatic: ‘Don’t do it!’

Although his warnings about the toll such a job can take on your social and family life are real, it’s not the whole picture. After more than four decades as a journalist, most of them in live radio, Rice still describes the job as exciting and invigorating.

‘Live radio is exciting. It’s like being on stage. You need to both operate the studio and read the bulletins and correct any mistakes and eliminate them as you go.’

‘You’re the first to know things and find out about unexpected events – who would have thought the Soviet Union would fall? And even in domestic newsrooms you’re at the centre of a web of information,’ he says.

Based at the ABC’s Southbank studios in Melbourne, Rice works with a small team to produce the daily current affairs program. Using international wire reports, reports from correspondents and local Pacific media as sources, Rice says the internet has made it much easier to find interviewees and information.

And he says the internet has also favoured radio in other ways.  ‘Radio fits the internet format perfectly. It’s just another tool for us to use to (broadcast). My daughter tells me podcasting has now led to a revival of radio. The only issue for us is that if broadcasts are going to be listened to over and over again, they need to be absolutely perfect or people pick you up on it.’

Over the past four decades Rice has reported on major world events from the September 11 attacks to the Boxing Day Tsunami in south-east Asia, French nuclear testing in the Pacific, East Timor and the Sri Lankan civil war, among many others. Sending broadcasts out to the world, in many cases to places where Radio Australia was the only reliable news source, Rice and his team reported on conflict and disaster from the safety of the ABC’s Melbourne studios.

Despite spending a career reporting on conflict only once has Rice actually been in the line of fire himself.

‘In 1973 there were about 1000 armed robberies in Melbourne and as we were waiting in Russell Street (Melbourne’s police headquarters at the time) we heard about a payroll robbery in West Melbourne over the loud speaker. We raced to cover it and found we had arrived before the police. We saw the gunmen escaping over the rooftops but when the police arrived they started shooting at them – and we were right in the line of fire.  But when you’re young you don’t think about (what could have happened), it’s all part of the job.’

Over the decades Rice has trained many younger journalists and says graduates should try and get into a metro news room as soon as they can. ‘Listen to the old journos and learn on the job, its the only way to do it.’ Rice says real journalists ‘have a hunger to get stories, see stories and shape information so it has impact.  You have to be really interested in people. It’s a job that needs an ego but you have to sublimate that ego to become a medium for the story.’

Justine Costigan is a Master of Global Communications student at La Trobe University and the former editor of upstart.  You can follow her on Twitter: @justcostigan