The month of May sees Fairtrade Fortnight held from the fifth to the twentieth of May, a celebration of all things Fairtrade, ‘better prices, decent working conditions, local sustainability, and fair terms of trade for farmers and workers in the developing world.’

During these two weeks various events are held around the world with the most important of these being Fairtrade Day on 12 May. On the previous day, 11 May,  Moral Fairground hosted the Victorian Fairtrade Festival at Federation Square during which not-for-profit organisations such as Seven Women and Universal Village could showcase their wares and inform people of their work.

On 16 May, La Trobe University supported Fairtrade Fortnight by holding their own festival, with some of the different organisations from the recent festival at Federation Square represented at different stalls. The day was organised by Bonnie Thompson and Martin Moignard of La Trobe’s Equality, Sustainability and Peace Association.

Bonnie explained that she got involved with ESP from hearing about  it around campus. ‘I kept hearing about all the good work that they had done as a social justice and environmental collective.’

This year ESP have run Conga for Congo, which was run in the Agora and is basically an African solidarity promotion of peace and positve messages. They also organise the Students of Sustainability conference which runs every July.

The ESP had been campaigning for Fairtrade for years at La Trobe University and finally got it Fairtrade accredited two years ago. According to Bonnie, ‘ESP have been working on it for years because we are all about people making ethical consumption decisions when they’re consuming – thinking about where their products come from and how their purchased products affect other people’s life and environment.’

‘This year when I heard that they were doing [the Fairtrade Festival at La Trobe] I got on board and helped to put together a stall which had a quiz deisgned to teach students about what Fair Trade is; to find out their prior knowledge about it, where they can get it on campus and then asking them their care factor for Fair Trade, and what makes them choose certain products when they’re purchasing.’

A lot of people don’t know where their products come from, so it’s important that more companies are Fairtrade accredited. In this way it is insured that noone suffers in the process of making the product, and the consumer can be happy in the knowledge that what they are buying is made through just and equitable means.

Some of the Fair Trade stall holders present on the day were Oxfam, Care Australia and Etiko shoes.

‘I was also happy to learn that Image La Trobe is the merchandising shop on campus which sells so many fairtrade products as well as Fairtrade La Trobe Tshirts.’ Bonnie stated further.

Being accredited means that all the tea and coffee in the tea rooms, staff rooms, and at the conferences on campus is Fairtrade certified. ‘The retailers here at La Trobe respond to consumer demands, so we try and educate the students to ask for Fairtrade. It’s something that we need to continue to focus on so that we don’t forget about it and forget that we are accredited.’ 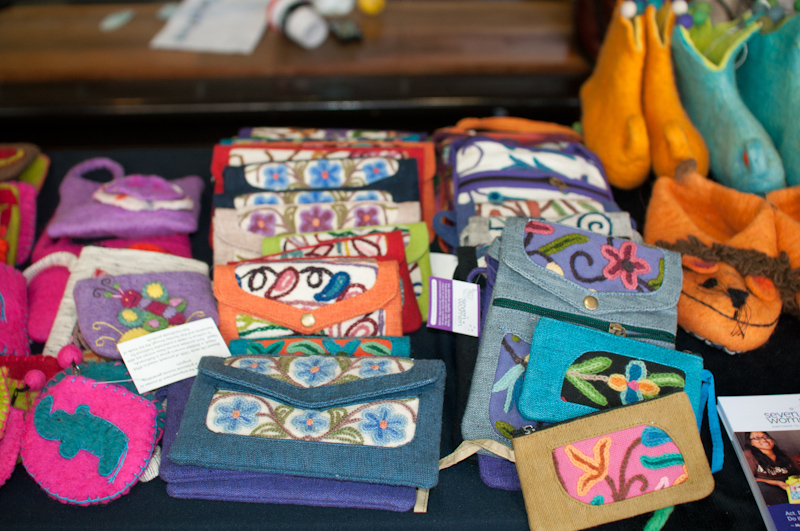