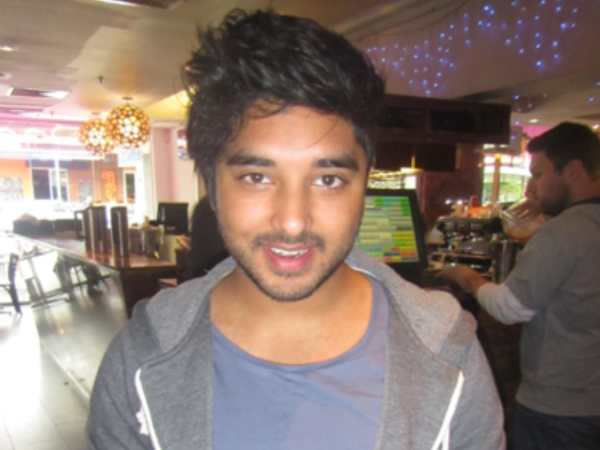 After graduating from Deakin University with a Bachelor of Arts majoring in drama, Rohan Mirchandaney prepared for the biggest audition of his life.

This role would be much more challenging than anything he’d played before. This time he had to be himself.

“I wanted to treat it as another audition experience,” says Rohan, who is an aspiring actor who’s appeared in a television series pilot, a number of short films and performed with Monash University’s Shakespeare Theatre Company.

“20-odd thousand people from around the country auditioned for [the show]. The chances of getting in or thinking you’re going to get in are next to none. So I went in there just wanting to be myself.”

He feels his self-assuredness during the second-round group auditions resonated well with the show’s producers.

“There are a lot of show-ponies that really kick off early on,” he says. “I think they liked that I had opinions; that I was kind of just a normal guy, I guess.”

Rohan entered the Big Brother house in Dreamworld on the Gold Coast on day eight of the competition. He was evicted just two weeks later on his 24th birthday.

Having worn the latecomer status for his first week on the show and faced accusations of being a mole, he says he would have much preferred to be one of the 12 original housemates.

“I think I’d have felt a lot more comfortable. Less under pressure and I could just feel like one of the group straight off the bat.”

But being late is something Rohan is relatively familiar with. After being with his girlfriend Prachi for five years, he’s only just told her he loves her – after his eviction.

“I was nervous,” he says, thanking his time on the show and the other housemates for helping him to break his habit of “being on the defensive emotionally”.

“I was quite impressed that it took a bunch of random people who I’d never met a short space of time to kind of guide me in that direction,” he says. “[They] gave me the idea that I wasn’t alone in a relationship. There are definitely two people there. The way I am, sure it might suit me, but it absolutely doesn’t suit [my girlfriend] at all.”

“I guess I was mature enough eventually,” he says, pausing to laugh, “to understand that and surrender myself to doing it for her.”

Despite his long-term reluctance to drop the L-bomb, Rohan’s adoration of Prachi is evident. The two became close friends at the age of eight or nine, Rohan says, after their families became acquainted.

“My dad was in charge of one of the organisations that brings Indians together in Melbourne and her family had just come over from New Zealand so our families met that way,” he says.

It wasn’t until eight years later that they started dating. “It was a bit of a surprise. I don’t know if she’d want me saying this, but she was kind of chasing me for a while,” he says with a laugh. “I wasn’t willing to give.”

“But she was very persistent and good on her. Hopefully it worked out in her favour.”

When asked to name his greatest achievement, he says: “Probably my girlfriend.” He folds his hands in his lap and looks down towards his cappuccino with a fond smile as he proudly describes her extensive voluntary work.

“I think she’s someone in my life who not only encourages me to do well but she keeps me really grounded,” he says. “I look to her a lot.”

His love for Prachi wasn’t the only love he managed to uncover during his time on Big Brother. In an interview before his show debut, Rohan said he was looking for the non-romantic kind of love in the house and believes he found that in fellow housemate and public favourite Ben.

“Yeah we clicked very well. I loved that we were so opposite,” he says. “It was like we were from different worlds, so we learnt a lot from one another.”

“I was quite impressed that he wasn’t there with an agenda, like everyone else, myself included,” he says. “He wasn’t fixated on winning or playing the game, being devious or trying to put people off their balance and that was kind of admirable.”

“I couldn’t say those things about myself. He really made me look at it from a different perspective because I was very much there to win.”

31-year-old Ben Zabel from Brisbane was a favourite to win before his shock eviction on day 73.

“I was watching [the show when Ben was evicted] with a group of friends and when they read out his name, they all looked at me thinking, what’s the story,” he said, “because surely he can’t be eliminated for real.”

The opportunity to jump straight out of acting school and onto one of Australia’s most popular commercial television programs is something Rohan feels extremely grateful for.

“I was really fortunate to be picked,” he says, with a smile. “Part of me doesn’t feel like I deserve it.”

“If people go out of their way to write me something or want to see me or have a chat or take a photo, I’ll definitely be up for it. Even if I’m not naturally suited to it, I just enjoy it. I’m having fun and I’m really appreciative of it all.”

So perhaps we’ll Rohan in a Hollywood blockbuster or tying the knot with Prachi.

But don’t hold your breath – he could be a while.

Rikki-Lee Burley is a first year Bachelor of Journalism student at La Trobe University. You can read more of her work on her blog and follow her on Twitter: @RikkiLeeBurley