On the fifth of May this year Buddhists around the world celebrated the most important event on the Buddhist calendar Vesak. Vesak encapsulates the birth, enlightenment and death of the man named Siddhattha Gotama who went through many trials and tribulations to become the Buddha.

Vesak, which is typically celebrated on the full moon of each May, is done so by both strains of Buddhism in different ways.

There are many different ways in which the Buddha is appreciated this month, and on the 19th and 20th of May Melbournians got to witness how Buddhists (primarily Mahayana) commemorate this integral time. Anyone who wanted to partake could do so this weekend by getting involved with all the different actions performed to pay homage to the Buddha.

On arrival at Federation Square visitors received a guide in which was a map on which people were told acquire a stamp at each of the places they visited during the day to receive a special prize at the end of their journey.

Many people paid tribute by planting incense in the sand, praying and bathing the Buddha. Many also bought flowers as an offering at the shrine and one could receive a sealed cup of water which had been previously blessed.

Further interesting activities at the festival included the concept of writing a message of good-will on a Bodhi leaf and placing it on a pole among all the other messages of peace in the Field of Enlightenment (or Enlightened Consciousness).

Festival-goers could also view photographs from Buddha’s Light International Association of Victoria  (who helped organise the day) along with Fo Guang Shan Melbourne and view artwork. People could also interact by making their own artwork including origami lotus flowers and scribing their name in Chinese calligraphy.

There were also different performances held throughout the day to entertain and enlighten the guests, such as the ‘Vegi-licious – The Karma of Being Vegetarian’ cooking demonstrations, singing by Buddha’s Light Singing Group and Indian Extravaganza Dance by the Tatva Dance Company.

One of the special ceremonies held over the weekend was the Annual Buddha’s Day Baby Blessing Ceremony during which children under age six were blessed by Venerables from Fo Guang Shan. Buddhists believe that, ‘A newborn is a gift of hope and promise to ourselves and to the world at large; a continuation of the power of life.’

The entire festival, like this ceremony, was rife with meaning and messages of peace and benevolence for all those who came along and participated in the festival. In this vein the two-fold goals of the festival to simply ‘promote harmony, respect, peace and cultural awareness in our culturally diverse society’ and, ‘to share joy and happiness within the community and among families.’ 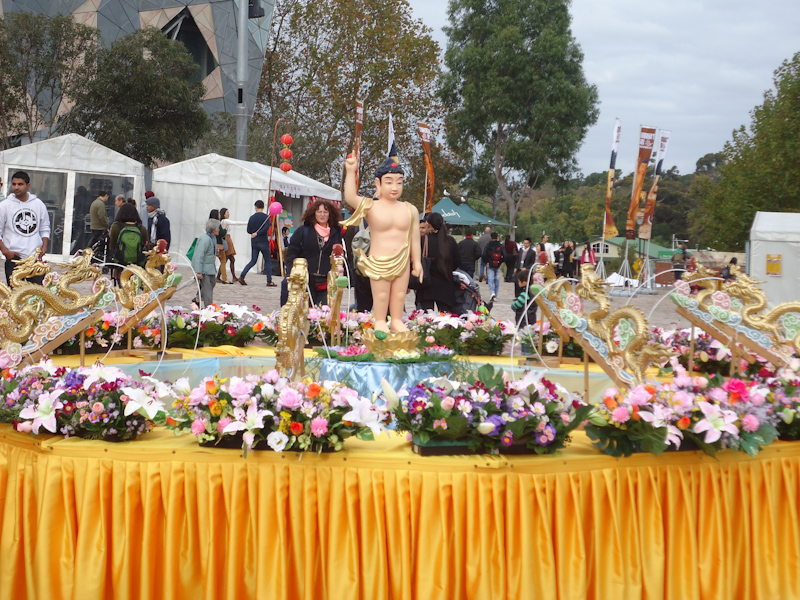