Australian Cardinal George Pell has made it into The Onion news satire website.

An image of the conservative cardinal seated in a large chair was used in a story with the the headline ‘Bishop Sick Of Local Church Scene‘.

The photo, taken by Robert Pearce, originally accompanied this 2003 story about Pell’s appointment as a cardinal that appeared on the Sydney Morning Herald’s website.

In The Onion’s story, Pell is identified as ‘Bishop Robert K. Boland of the Roman Catholic Diocese of Sacramento’. The Bishop complains that his diocese has become ‘tedious’ and ‘that the congregations have sorta become one big blur of blue-haired old ladies’. 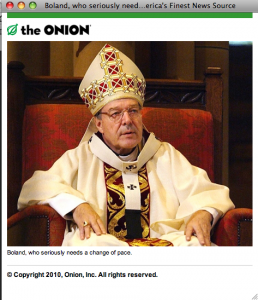 'Bishop Boland': Cardinal Pell makes it into The Onion

Further in the article, the Bishop says ‘What I need to do is climb my way up to cardinal. That’d be my ticket out of this one-horse diocese.’

While The Onion’s writers may not know Pell is a Cardinal, there is at least one similarity between Cardinal Pell and his satirical double: his opposition to gay marriage. Bishop Boland says that he hopes that issue will liven things up a bit.

‘I’m grateful for this recent controversy over gay marriage. It allows me to dabble in politics a little. I’m firmly in support of President Bush’s constitutional amendment to ban same-gender unions, so I’ve been trying to stir up some healthy debate on the subject. Anything to do something new in this diocese.’

It is not known if The Onion website targeted Pell, who is an outspoken critic of gay marriage, deliberately or not.