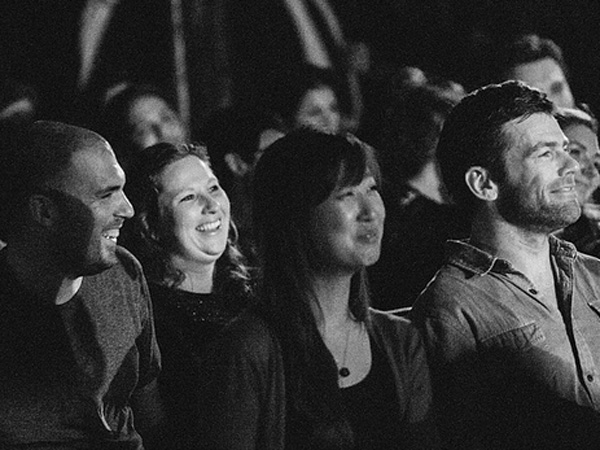 It is one of the most challenging environments on the planet. Autumnal winds beat down hard; skies above are thickening to April-greyness.

It is an environment that requires strength, resilience and adaptation; it is the Melbourne International Comedy Festival. Which, naturally, is a breeding ground for that curious species known as the Comedy Fan.

It is estimated over 600,000 of these creatures converge around Melbourne comedy venues each autumn. Some prefer the main watering hole, the Melbourne Town Hall. Others favour more isolated habitats: the Victoria Hotel, Trades Hall, Fitzroy, or Northcote.

They are predatory creatures; circling ominously in flocks, ready to pick over the carcasses of weak and vulnerable comedians. They caterwaul, they screech, they grin.

Let’s take a closer look at the five most common categories of these unique beasts that grace the festival plains.

The Grinner
This species emits no sound, they just sit quietly and a grin a wide Joker-like smile. It looks as if their gums have been flapped open by one of those Clockwork Orange-contraptions, but no, they just do that of their own accord. Their cheeks must severely ache afterwards; the plastered on grin resembles that of a Cheshire cat, or Joan Rivers. By some accounts, this is the same face they pull during the act of mating.

The After-Sigher
First they produce a hearty no-holds-barred belly laugh like one of those hyenas in The Lion King. Then, as the cacophony of collective laughter gradually peters out and everyone else falls silent, they’ll contribute a small ‘haha…mmmm’ of agreement. It’s as if in this moment the world has been perfectly explained to them; their tiny heart brims with comedic joy and wonder and their sigh exclaims to everyone, ‘you guys, isn’t comedy just the best?’

The Silent Shoulder Shaker
These creatures look like they’re having a conniption. Their eyes bulge. Their shoulders slump wildly up and down. But, no sound comes out. It seems as if the raw force of comedy has sucked their ability to produce noise. They may wave an, ‘oh stop, this is all just too much’ hand in front of their face. Occasionally, tears of pure comedy joy will leak silently down their cheeks, as if they’ve had one-too-many shandies after dinner. They may also throw in a knee slap, if feeling particularly pleased.

The Stone Face
A rare variety on the comedy plains, but a particularly interesting one. Once I sat next to a stony-faced friend of mine, who didn’t crack a grin throughout the whole show. When I asked her opinion later, she explained, ‘oh no, I really enjoyed it.’ Maybe she was just trying to make me feel better about dragging her there, but from further observations, she seems belong to a species that just enjoy their comedy in a state of composure. Whilst the rest of us buckle over in fetal position fits of hilarity, they will sit, straight-backed and non-emotive, maybe emitting a slight tut of approval occasionally, but secretly cackling on the inside.

The Mixed Bag
These are volatile creatures, the most animalistic of them all. You just don’t know what you’re gonna get. Sometimes a loud honk, sometimes they’ll bare their fangs, baboon-like. Other times it will be a silent shoulder-shake. And sometimes, sometimes spit will happen.

Observe these strange creatures for yourself, or indulge your own inner animal; the Melbourne International Comedy Festival runs from now until April 21st.