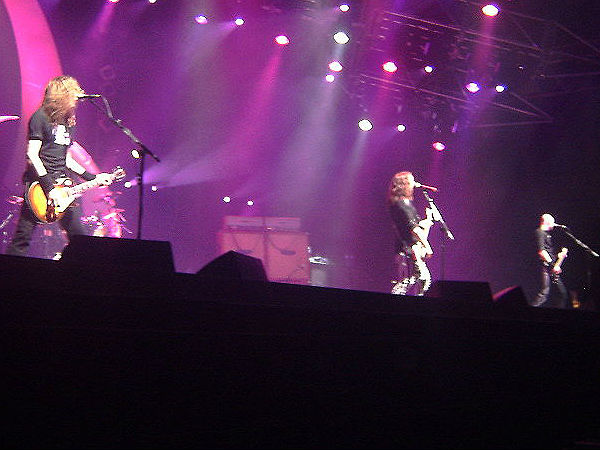 British rockers The Darkness have cancelled their April tour with Joan Jett and the Blackhearts due to drummer Ed Graham’s health problems.

Graham, who had both hips replaced years ago due to his battle with osteonecrosis, missed a part of the band’s US tour in 2012 due to further problems with his condition. Since then, he has played with the band at every show.

The Darkness management team made this statement.

The cancellation tops off what has already been a poorly promoted tour for the band. They announced the tour via Facebook in November 2012, yet there was no word from promotion company McManus Entertainment until late January.

The delay infuriated fans, as McManus gave only a couple of weeks for fans to save enough money to afford the $99+ tickets. The shows were also booked at venues far bigger than any that the band had played in their previous Australian tours, with the prospect of the Glam Rockers filling them seeming like too much of a stretch from the start.

Hisense Arena and the Brisbane Riverstage were always going to be beyond them, not to mention the lack of Perth performances that led many fans to attack the band via social media.

The problems didn’t stop there.

There were different tour posters circulating the web, each showing different tour dates. In the weeks leading up to the tour, the prices dropped to $79, conveying to us all that the tour had not being selling as well as expected.

Whilst it would be unfair to suggest that Graham really isn’t sick, it would be fair to be suspicious about the whole cancellation of the tour. It is one thing to cancel The Darkness, but to cancel Joan Jett as well is very disheartening for her fans. Why not place her in smaller venues for her own shows?

Adding to the suspicion is Graham’s decision to complete the rest of the band’s European tour.

If his condition was that bad, why play the last seven European shows? Or is his health an excuse for a deeper reason behind the tour cancellation?

Perhaps the band have cut ties with McManus due to their poor handling of the tour, despite the success of their tour here last year.

It is understood that Graham’s health battle is ongoing and difficult but the decision to complete the band’s current European tour on top of McManus’ poor organisation and the obvious lacklustre ticket sales, really leaves a bitter taste in the mouth of the diehard Darkness fan.

The band’s proverbial radio silence increases suspicion on the true reason for the tour cancellation.

I don’t think the band is to blame here, with McManus Entertainment looming as the likely culprit.The tour reeked of poor management from the moment it was “announced”, and now the plug has been pulled within sight of the shows.

It simply does not add up.

Three Gigs To See This Weekend:

The canadian rock legend is back in Aus for what promises to be a sensational tour. WIll be supported by Crazy Horse and Melbourne rock stalwarts The Drones

Melbourne instrumental rockers Xenograft are certainly a live act you don’t want to miss, so go check them out

Head out to the Cherry Bar on ACDC Lane and celebrate St.Patrick’s day in style with some blues. Playing is The Kashmere Club w/ DJ Max Crawdaddy

Sam Patrick is a third year Bachelor of Journalism (Sport) student at La Trobe University. Follow him on Twitter: @sammylpatrick