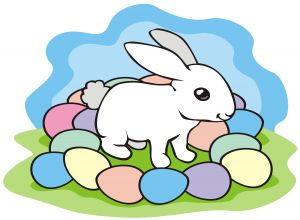 Aaah yes, Easter. That confusing time of year when we all benefit from a long weekend while trying to remember just what or who we have to thank.

But really, it’s simple isn’t it? Jesus took one for the team on Good Friday, found himself entombed for a couple of nights before deciding on Sunday that the lack of sunlight wasn’t doing his tan any good. Or not.

You see, the period that we refer to as Easter is in fact an old pagan celebration that dates back well before the supposed time of Jesus’ death and subsequent resurrection. In fact, the name ‘Easter’ is a derivative of the name ‘Eostre’ – Anglo-Saxon paganism’s ‘goddess of dawn’ – whose existence symbolised the increased fertility of the land at the turn of spring.

Ever wondered why the date of Easter Sunday changes every year? Or put a different way, does it seem a little strange that the date of Jesus’ death and resurrection varies from year to year?

Easter Sunday is defined as the first Sunday after the first full moon on or after the vernal equinox – the period in March wherein the length of day and night are equal.

Long before the advent of Christianity the vernal equinox was seen as a time of great import – a time in which the sun found itself in a fierce battle with darkness to see which would gain ultimate supremacy. After a couple of days the sun would eventually emerge victorious with the days becoming longer in the lead-up to the summer solstice.

In Greek mythology this period was symbolised by the plight of Persephone, the daughter of Zeus. The abduction of Persephone by Hades – the God of the Underworld – led to the earth becoming barren of life, the season we now know as winter.

When Zeus rescued his daughter at the time of the vernal equinox, this led to the Earth’s rebirth into prosperity and fertility – the season we know as spring. In Egyptian mythology this transition was represented by the life of Osiris whose death and consequential rebirth led to a similar reawakening of life following the vernal equinox.

In fact history is littered with examples of the death-resurrection myth being used to represent the transition from winter to spring, Christianity’s appropriation of earlier customs being the most recent case. That’s right, the Jesus resurrection story is a centuries old myth plagiarised and repackaged by early Christians.

‘That’s all very interesting’, I hear you say, but where do Easter eggs fit into the equation? Well, according to the New International Encyclopaedia, the use of eggs at Easter ‘is of the highest antiquity, the egg having been considered in widely separated pre-Christian mythologies as a symbol of resurrection’.

The use of chocolate Easter eggs apparently began in Europe in the 1800s following the Industrial Revolution and this practice has since continued unabated. Cadbury allegedly sells around 240 million chocolate Easter eggs in Australia every year – around 12 per person – and with business like that, is it any wonder that ads for Easter eggs come out the week after Christmas?

The prevalent rabbit symbology associated with the Easter period, as demonstrated in the ever popular Easter Bunny, is also a remnant of ancient pagan tradition. Giving birth to huge litters in the early weeks of spring, the rabbit was a symbol of the increased fertility of the earth in the weeks following the vernal equinox.

For us Aussies though, the rabbit is revered to a far lesser extent, having been introduced to our great land with the First Fleet in 1788 and subsequently breeding out of control. Hence, the Easter Bilby. How’s that for putting an Aussie spin on things?

In all seriousness though, why, as an apparently secular nation, do we still cling to Easter and Christmas so fervently? Is it because the majority of our population truly respects the religious significance of the periods which these holidays cover? I suspect not. Is it because both periods have been so corrupted by commercial interests that we don’t have a choice in the matter? Sounds a bit more like it.

Whatever though. Just give me my double-time and a half at work and a truckload of chocolate and I’ll celebrate anyone’s resurrection…

Matt de Neef is one of upstart’s co-editors. This piece first appeared on his blog, A Cursory Glance…