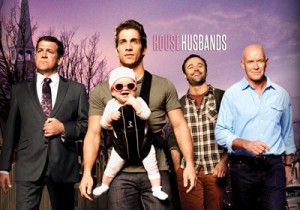 ‘Not only have you failed to supervise your children, but you’ve allowed them to steal a bus. As far as I’m concerned, none of you deserve to be parents.’

Pretty harsh words, hey? These were spoken in the premiere episode of Channel Nine’s new drama, House Husbands, by the school’s assistant principal to the show’s four dads – and it isn’t the only time that the competence of these ‘house husbands’ as fathers is questioned.

Through the course of the episode, we see one of the dads burning his laundry and another one losing the school principal; he was taking the school principal home from the hospital after breaking her arm in a runaway school bus accident. A third dad is told by his ex-wife’s partner, who happens to be his manager, that they will be fighting for custody of the estranged couple’s three children so that the ‘kids end up where they should be – with their mother’.

There is even a conversation between the fourth couple, highlighting the fact that the father had only been caring for their daughter for ‘two weeks’ and in that time she had driven off with a school bus. In the five years that the mum had minded the child though, she had only fallen off a swing and ‘oh, she spilled some milk once’.

To put the show in a bit of perspective, in a recent interview producer and co-creator of House Husbands, Drew Proffitt, said: ‘We want to show a variety of aspects of being a father; that there isn’t one rule book of what makes a good family. All our guys approach it in their own way, and it’s not necessarily the right or wrong way.’

I can see where the show is coming from, that yes, dads are going to make mistakes; they’re not perfect and nor should they be. However, after watching the first episode, I did feel as though there was an underlying message that maybe mums could have avoided the mistakes dads made – that they were mistakes that only a dad would make.

I grew up with my dad at home – he was the ‘house husband’. My dad did the bulk of the cooking and cleaning as well as the school drop offs and pickups during the week. One of the opening scenes where Mark (Rhys Muldoon) is picking up the toys and doing the laundry is familiar to me – except I don’t think my dad never burnt anything, although he did dye my socks pink once (but so did mum).

My mum worked full time and my dad would work nights as a night auditor at a hotel – I recall him having multiple jobs sometimes. While this seemed completely normal to me, it was never really ‘normal’ to anyone else to have dad doing all the things a ‘mum’ should do.  I would often get notes to bring home addressed to ‘Mrs Unger’ or a request from my teacher that my mum volunteer to help out at canteen.

It was the same for two of my younger brothers, during their kinder and early primary years, up until the birth of my youngest brother. At that point, there was a role reversal and my mum decided to be a stay-at-home mum. That lasted a couple of years, but while my mum went back to full time work, my dad never returned to being the full stay-at-home dad he was when I was growing up.

While I was at school, there was only one other Dad doing the school drop off and pick up; now, it’s different. I take my youngest brother to and from school, a couple of days a week, and it is normal to see a few dads out picking up their kids from school.

There is even a dad’s club where the blokes get together and do stereotypically blokey activities like organise working bees, go on golfing weekends or more recently a sporting trip to Sydney. Granted, the school drop zone is still mum dominated, but it is nice to see more dad’s in the mix.

So, don’t get me wrong, I think it is great that a show like House Husbands exists. It’s great that there is a show on television portraying some of the very real battles that parents face; from the inherent guilt that a mother faces when she decides to work full time when it seems like everyone’s telling you that you need to be at home looking after the kids, to a dad trying to juggle work and looking after his daughter. It’s great that societal shifts are being represented on television; that yes, house husbands do actually exist and they are more common now than before. Overall, the show has potential.

However, having the dads ‘fail’ from the start has me questioning the message. Yes, mistakes are bound to be made, but I hope the show doesn’t let these mistakes define the house husbands. My dad was home for me, and I’m not saying he was prefect, but I can honestly say that I never drove off with a bus.