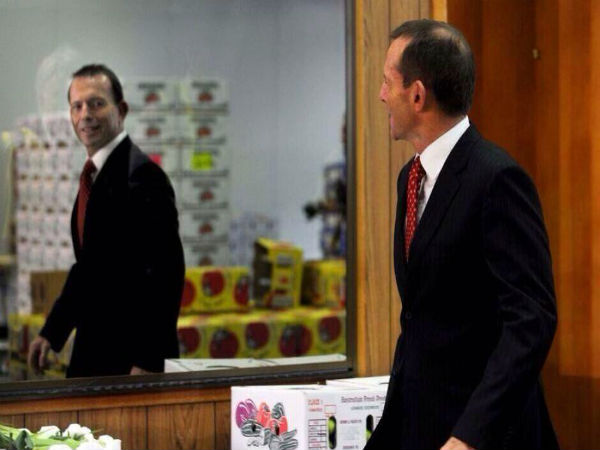 In two separate remarks over the last 48 hours, some of the reasoning behind the widening gap between Kevin Rudd and Tony Abbott became somewhat clearer.

In a speech addressing ALP supporters in Sydney’s west on Monday, with dire recent poll figures overtly impacting upon his vernacular, Prime Minister Rudd said: “We’re not even in the middle of the second quarter yet if you play AFL, and we’re certainly not up to half-time yet if you’re in the NRL.”

On Tuesday, with the stigma surrounding “sexgate” from last week lingering, Tony Abbott once again took to the microphones regarding LNP candidate Fiona Burke. “Obviously, she’s not just a pretty face,” he remarked, armed with a rye smile and sly chuckle.

The contradiction between the two remarks was palpable.

In his comments, Rudd remained a man unsure of who or where he was pitching his ideas; so desperately searching for voters – any voters – he finds himself pitching to all but resonating with none.

By bringing up AFL in the rugby heartland of western Sydney – especially considering the struggles the AFL is having with making inroads into the area – Rudd’s message came across somewhat mixed; unable to figure out who it was he’s pitching for in the particular instance.

Such an inner struggle would go some of the way in explaining the contradictory comments littered throughout the opening fortnight of the campaign.

The most obvious – and most widely covered at present – is the government leaping head-over-heels back into the murky mud that is negative politics, seemingly forgetting recent requests to avoid such tactics.

Though they would certainly never admit it, Rudd’s camp appears to be grasping at straws – whichever could help them turn back the rolling Coalition tide.

Abbott on the other hand, despite his own failings, has become an incredibly consistent campaigner.

Even with a potential vote-losing blunder still permeating throughout the political landscape, he harkened back to his inflammatory remarks; almost brazenly daring the disapprovers to question him, while supporters would chortle and laugh, “that’s our Tony”.

As outlined in The Guardian, the Opposition Leader is unashamedly positioning himself as the “man’s man” of this election. He’s ready to roll up his sleeves and fix what ails the nation.

Moving beyond the logic – or even truthfulness – of the above position, it’s a continuation of the consistent image crafted around Abbott.

Whether it’s in the form of ALP-derived three word slogans, or his overall demeanour, from the moment this election emerged over the hill beyond the horizon the Opposition Leader has rarely waivered. Stoically, he’s stood unmoved in the face of criticisms, just or unjust.

Love him or loathe; the Coalition has done a masterful job of presenting a candidate so predictable at times it borders upon comical. At this point, we all know the spiel: disastrous rhetoric about the Labor government, nostalgic throwbacks to the Howard days, #StoptheBoats, cheap gags and pointing to the little blue booklet.

Yet, the aforementioned not withstanding, he leads in the polls; apparently on the verge on running away with the prime ministership.

The LNP has figured out the audience, and subsequently sold to it with aplomb.

Despite Labor firing its most stinging of salvos across TV screens and social network streams from Sunday evening, the picture painted of Abbott will be incredibly tough to wash.

Kevin Rudd, rightly or wrongly, is tarred with the events of the recent past that resulted in public trust in Canberra plummeting towards new lows.

Tony Abbott, despite his role in destructive environment around parliament, is spared of such in the eyes of many – partly because he’s been constant.

By all accounts, we’ll soon see if he stays that way once assuming office.