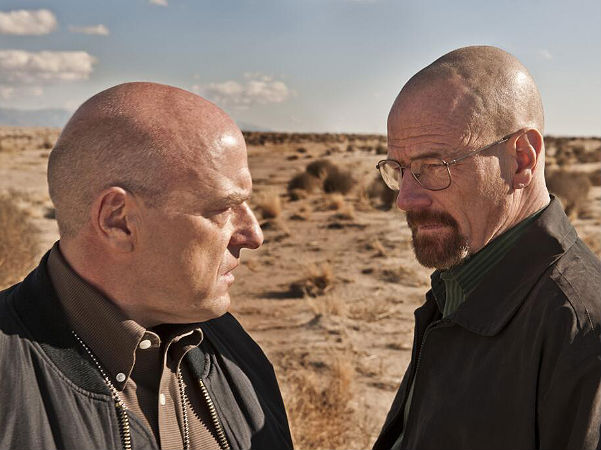 Need a full list of ways you can watch #BreakingBad? We’ve got you covered: http://t.co/YFbs4TquYk pic.twitter.com/mgeVKWTy3J

Liam Quinn: Paddy, I’m so excited for this. Beyond excited. Is there a word for beyond excited? I’m a mess…help.

Paddy Naughtin: You think you’re a mess? I’ve been huddled in my room all day, too afraid to go outside just in case someone lets slip a spoiler. I’m nervous as all hell.

LQ: Anyone who let slip a major spoiler from today would have been in for a serious box-cutting…

But, enough pre-game, the “previously on Breaking Bad…” is starting. See you on the other side, Paddy.

LQ: Flashforwards? What is this, Lost?

Bearded Walt is quite the sight, going to need to get used to that later on. Oh, and the shot of the graffiti, yikes.

PN: The ricin is definitely going to kill someone this series. It’s been shown way too much for it not to play a major part of the plot.

LQ: From a production standpoint, it’s shocking to start the final run like this. Showing us the thing we’re most familiar with as an audience (Walt, the house) in an entirely different manner. And yeah, that ricin is going to get someone.

PN: We’re back in the present day now, and finally Hank has gotten off that toilet. I’ve waited nearly a year for that. How will he react?

LQ: How’s the timing of Marie’s words as Hank walks back out. He’s been sat around a table with the devil from the beginning, that’s gotta sting.

PN: I really loved the juxtaposition of seeing Carol the neighbour. In the first scene she was so shocked and terrified to see Walt, and here she’s as friendly and jovial as ever.

LQ: The panic attack is great – it has been Hank’s “tell” throughout the series when he was in over his head. Another little bit of continuity that makes everything run so smoothly.

PN: Hank is in full detective mode now as he studies Gale’s notebook with the Walt Whitman book he found at Walt’s house. The handwriting matches up. Hank knows he’s onto something.

LQ: How similar is Walt behind the counter at the carwash to Gus at Los Pollos? Routine, seemingly nothing more than a humble carwash owner. If only “batshit crazy” Lydia didn’t have to try and mess it up.

Sidenote, I’m going to be telling everyone to “Have an A1 day.”

PN: Brian Cranston’s transition from Walt to Heisenberg back to Walt in that scene is seamless. The slight furrowing of his brow, the deeper more menacing voice, and the overall authority that is portrayed by his stance is just fantastic.

LQ: So, Hank’s going rogue? Sort of? Or is he just not investigating Walt from the office. I don’t know about you Paddy, but if I had to put on character this season on “Suicide Watch”, it’d be Agent Schrader.

PN: Finally we see Jesse this episode, hanging out with his two stoner buddies. I feel like this Star Trek story that they’re talking about is going to turn out to be a metaphor for something that is going to happen in the series, but we’ll just have to wait and see.

LQ: I’ll be honest, that Star Trek story was about as good as the last movie.

PN: I’m betting Walt is Spock, and Jessie might just be Chekov…

LQ: Alright, enough Star Trek…lets get back on track here. It kind of gets forgotten in the shadow of Walt, but Jesse’s transformation is almost more important. Earlier on in the series, he screamed “What’s more important than money?” at his co-cook. Now he’s giving millions away.

PN: We finally have confirmation that Walt’s cancer is back as we see him getting chemo. It just won’t go away, and neither will Heisenberg seemingly, as Walt mutters “I’ll handle it” to Saul in his gruff alter ego.

LQ: Brilliant, our first Walt/Jesse scene. These two on-screen together is always a good thing.

So much to take out of that exchange:

– The attempted consoling/justification by Walt.

– Jesse’s confession he thinks (or knows) Walt killed Mike, forcing him back into Heisenberg mode.

– After all that, Walt goes back to blatantly lying through his teeth.

Paddy, this just reaffirms all Walt cares about is his survival – at least, in my humble opinion.

PN: I completely agree. I also don’t think Jesse fully believes Walt, and I’m sure this won’t be the last time Mike is brought up this season.

LQ: Again, knowing full-well the danger of making predictions, Jesse finding out about Walt’s role in Mike’s death and the poisoning of the child are the only things that can turn him against Mr White at this stage.

PN: Walt is such a clever man. Understatement of the century, I know. after realising Gale’s book is missing, he checks his car to find a DEA bug hidden on it. Is this the beginning of the end for Walt, as he realises he is now a suspect for Hank and the police.

LQ: The man is a genius. However, I’ll admit, that was one moment spoilt for me by an AMC promo…

PN: The death of the child is really tearing Jesse apart. He is literally throwing his money away.

LQ: Agree, Paddy. But, I think it’s more than just that. The death of the child is the straw that broke the camel’s back – contrary to how he started, Jesse’s a good guy now. The money represents everything about him that isn’t.

PN: This is going to be good.

LQ: Walt knows here. He’s just messing with Hank. How far does he push him though.

PN: I was sure that we would have to have waited much longer for this to happen, but of course, Breaking Bad always keeps us guessing.

PN: Hank is making connections left, right, and centre here. Suddenly he can see clearly, and the only thing in his line of sight is Walt.

LQ: The transition during that scene was incredible. Hank started literally in the position of power, stood above Walt as he was staring up wondering if everything was about to come crashing down. It ends with Hank almost in tears, while Walt threatens him, exposing his dark side. Wow.

PN: What an ending. That last line, where Walt tells Hank to “tread lightly”, is one of the best lines in the entire show in my opinion. It’s right up there with Walt saying “I am the one who knocks”. I’ve got chills. This is why I love this show.

LQ: I think I need a drink. How many hours until next week?

Emailing Bad will be an ongoing series over the next eight weeks. Want to tell the guys what they missed? Where they got it wrong? Contact us at @upstartmagazine, or talk to Liam and Paddy directly at @Quinn_LP and @PaddyNaughtin.