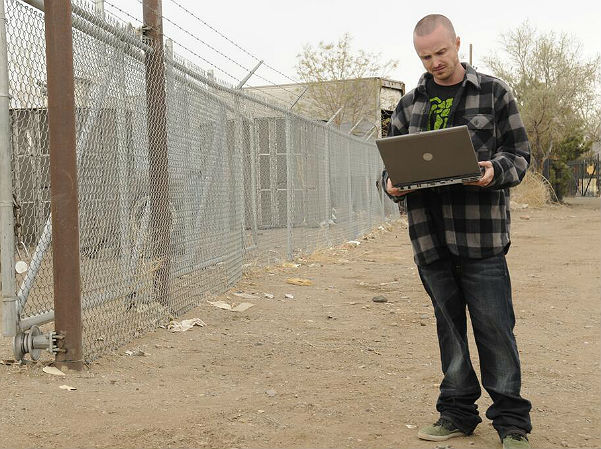 Well, this is it. The last episode ever of Breaking Bad. Thank you for sharing this ride with me. Without you we never would have lasted.

Liam Quinn: Paddy, we’ve finally made it to the end. I don’t know how to feel right now. Only 54-odd minutes left. It feels like there’s so much more to resolve.

LQ: There’s a certain degree of irony in Walt – seemingly – praying for help. But, then again, I suppose it wouldn’t be the first time a higher power has been cited in the lead up to – presumably – a full scale execution.

But, that’s another discussion. Paddy, Walt’s hitting the road…

PN: He’s coming home. We see that he’s got the entire barrel of cash stashed in the back of his car, not just the box he had at the end of the last episode.

LQ: Posing as a journo – that bastard! But, it seems we know his first stop. Can’t imagine this is going to be a fun visit for our Grey Matter millionaires (billionaires)?

PN: That shot of Walt slowly closing the double doors with the orchestral music in the background was great.

LQ: Haunting. For some reason, it reminds me of American Psycho. This is brilliant though, it’s like he’s walking through the life he could’ve had.

That wider shot showing Gretchen and Elliott happily going about their business was perfect.

PN: Walt is just so casual, talking about their new house and the wonderful view they’ve got. He’s completely in control.

LQ: YOU CALL THAT A KNIFE, ELLIOTT?

PN: I think he may have brought a knife to a gun fight.

LQ: The casual manner he tells them to “throw it on top” and not to “lose any under the furniture” shows the change in Walt’s burning desire for his money. A few episodes ago, he raced into the desert for it. Now, he couldn’t care less.

LQ: This is a pretty good plan – but, I guess we should expect nothing less.

PN: Oh my. We should have seen something like this coming. Walt’s plans are never that simple.

LQ: Maybe at the start Walt was pleading with Heisenberg, more than god. The way Cranston manages to swap personas mid-scene like that is a testament to his immense performance.

PN: They always manage to provide a spot of comic relief.

LQ: Walt isn’t happy at the thought of Jesse cooking his formula.

PN: What is this? Some bizarre dream of Jesse’s?

LQ: It’s the box he made for his mother – didn’t he speak about in at a meeting back in the day? Wow. Those Nazi’s really havent been taking good care of him either.

PN: Oh man, if this whole show turns out to be someone’s dream, or set in a snow globe or something I’m going to be super pissed.

LQ: I think we can safely assume no snowglobes or purgatory-type ending is in store. Gilligan wouldn’t do that to us.

PN: So this is where the flash-forwards come in. The diner, the machine gun, the ricin.

PN: Is it possible that Walt’s life may in fact be a little too exciting now? It’s remarkable to see how much he’s changed since the first ep. Seeing Walt juxtaposed between then and now while standing in the same room was a great inclusion.

PN: Lydia is so predictable, right down to the very seat she sits at.

LQ: Agree Paddy, she’s arguably the most formulaic character of the entire series. Nothing changes. It’s easy to imagine her meeting Gus at the same coffee shop.

It’s like Walt is deliberately positioning himself as weak in this negotiation.

PN: Walt wants things to go down as soon as possible. He wants it settled tonight.

LQ: At this stage, can we abandon the notion he might just walk out the other side of this? Walt’s ticking off his last acts.

PN: I think the waiter may have got Lydia’s order wrong. She wanted soy milk, not ricin, in her tea.

I don’t know about you Liam, but I’m extremely happy with this development.

LQ: Finally, someone gets it. That ricin is the ultimate long-play.

PN: It looks like Walt’s gone from chemistry expert to robotics engineer. That weapon is going to do some serious damage.

LQ: The man is a genius Paddy. He isnt bound by traditional scientific barriers!

Seeing how calmly Skyler reacted to “news about Walt”, I’d suggest he’s stood slightly in the shadows – probably half way through a plate of breakfast eggs.

PN: It wouldn’t be Breaking Bad without breakfast.

PN: The last time Walt saw Skyler he was running out of the house with baby Holly in his hands.

Skyler still thinks that Walt is going to give himself up. We know differently.

LQ: I love that he ditched the “for the family” reasoning. Once upon a time, that’s what his motivations were. But, as Walt says, it became about him along the way. He liked it. The allure of power. Although, interesting that he still refers to the money as “our”.

PN: Walt said he felt “alive” when he was out cooking. From the perspective of a dying man, feeling alive for Walt must have been the most important thing. It would have acted like a drug, and he became addicted.

As Walt turned and walked away from Flynn, he slowly blended into the background. That was great cinematography.

OK, so we’re finally at the compound. This is what the entire season has been building to. I don’t think Gilligan is going to let us down…

PN: I don’t know how to put into words what I’m feeling. There’s only minutes to go, and a lot of things still need to happen. This is going to be big.

LQ: We can assume this isn’t going to end well for the Nazi’s. Especially when Walt made a point to park in a certain way – I doubt that was coincidence.

PN: Not at all. I think we can all guess what’s going to happen, and it’s going to be awesome.

LQ: Paddy, I don’t “root” for characters – but it’s never a bad thing when some Nazi’s are probably about to get butchered.

LQ: The side part/combover thing he has going isn’t a good look.

Say hello to my little friend.

LQ: That’s a damn fine way to kill some Nazi’s.

LQ: It looked like Walt took a bullet too. Maybe it’s just me though.

PN: Something certainly hit him.

LQ: Todd and Jack still moving. That’d be one each, no?

PN: Jesse’s doing that one for Andrea.

LQ: and, probably a little bit for all the torture.

PN: I would be totally fine for Jesse to kill Walt now. The amount of pain that Walt has caused Jesse would be a perfectly good reason for him to end it.

Last episode ever of Breaking Bad. It would not be possible without all of you. Thank you all for the amazing ride. Love you Vince!!!!

LQ: Paddy, I think Jesse is going to make it… By walking away it shows the change in his character though. He isn’t just the puppet anymore.

PN: You’re right. He’s pulling his own strings now. He’s done with being used by Walt and the Nazi’s. He’s his own now.

LQ: Stevia sales are about to plummet.

PN: I didn’t like that phonecall. I felt it was unnecessary. Surely everyone understood that Lydia had been poisoned. I would have liked Walt’s last words to be to Jesse, not her.

LQ: Yeah, it was opportunistic at best. Jesse slamming full-speed through the gates, screaming joyously, is fantastic.

PN: In the end it was a bullet, not his cancer that killed him.

PN: That is a damn fine ending.

LQ: Bravo, Mr Gilligan. Bravo. Paddy, what are we going to watch now?

LQ: Might be time to go back to Season One.

Liam Quinn is a third year Bachelor of Journalism student at La Trobe University. You can follow him on Twitter at @Quinn_LP.

Paddy Naughtin is a third year Bachelor of Journalism student at La Trobe University. You can follow him on Twitter @PaddyNaughtin.