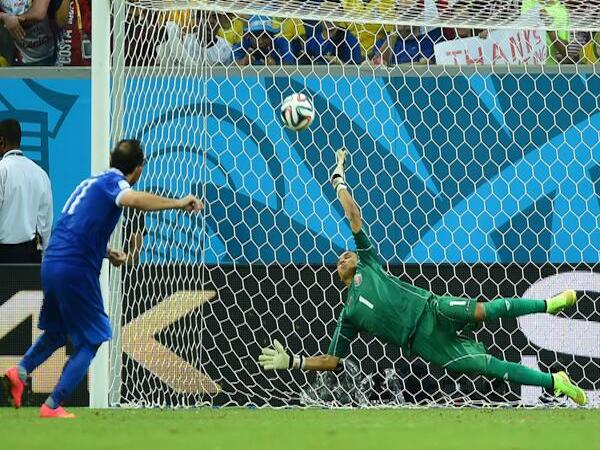 The 2014 World Cup has been famous for headline-grabbing results on almost a daily basis. But, for every surprising result, it seems a new household name emerges into the tournament spotlight.

The story of Costa Rica’s incredible journey through to the quarter finals is common knowledge, but who in particular has made themselves a star in more than just the passionate locals’ eyes?

Plying his trade in the La Liga with Levante, the 27-year-old has drew the attention of champions Atletico Madrid with a series of eye-catching performances in Brazil.

Navas has shut out Uruguay and England, while conceding just twice in his side’s other fixtures as they continue to surprise.

His stunning penalty save to eliminate Greece has made him an instant hero, if he wasn’t already, and he will now be etched in World Cup highlight packages for years to come.

The save in penalties by Keylor Navas. Simply incredibly performance by the #CRC goalkeeper. pic.twitter.com/s3V9kAI2Ex

Sticking with Costa Rica, Arsenal supporters will be delighted with the performances of striker Joel Campbell.

After signing with the Gunners in 2011, Campbell was unable to play for the London club without a working visa.

He has since spent seasons on-loan in France, Spain and Greece as he seeks the permit he needs to compete in the English Premier League.

His goal and assist in the World Cup opener against Uruguay is evidence he won’t take long to adjust to top level club football and his work rate as the lone front-man once Costa Rica were down to 10 men against Greece could only be admired.

Tuesday morning’s eliminated sides, Nigeria and Algeria, have two more names the world will surely be seeing a lot more of in the near future.

Although he didn’t have a huge impact against a higher-fancied French side, he showed plenty in previous games for the world to take notice.

Islam Slimani has been the brightest talent in Algeria’s first ever knockout round qualification. He equalised when his side needed it most in their final group game against Russia, climbing the highest and finishing emphatically.

In the previous game against South Korea, he turned provider following another goal in a 4-2 win.

Another of the eliminated sides, Mexico, houses more emerging names.

After almost not qualifying for the tournament and being forced to go through a play-off with New Zealand, newly instilled manager Miguel Herrera made a point of selecting purely Mexican-based players.

From this local talent, striker Oribe Peralta has been the most talked about. He has thrived under the pressure of keeping Manchester United star Javier Hernandez on the bench and scored and assisted as the Mexicans progressed through the group stages.

Next, the Netherlands were touted as a side in transition before the finals began and while true in a sense, the star quality of Robin van Persie and Arjen Robben has still been scarily prevalent for opposition defences.

Behind these names has emerged 20-year-old midfielder Memphis Depay. The winger, of Ghanaian descent, has made three appearances off the bench thus far with great effect. He has also become the youngest Dutch player to ever score at a World Cup.

He lifted the Netherlands away from adversity against Australia with a goal and a assist, before sealing the group-topping win over Chile with a well-timed run into the penalty area.

Top clubs in England are said to have this wonderkid at the top of their summer shopping list.

Australia’s foundations for its next golden generation were laid in Brazil and there was no better indication that the Socceroos are on the right track than the performances of the New South Wales-born winger.

After excelling in a short period in the A-League, Leckie’s raw pace was enough for European suitors to come calling. Following a search for more regular football than the German top flight could provide, the 23-year-old signed for Bundesliga 2 side FC Ingolstadt for a fee of less than a million Euros before the tournament began.

His new clubs’ board will no doubt be delighted with this piece of business, as his price will have multiplied since.

If Leckie is able to become more direct and add goals to his game, with some more experience, he will become a handful for even the world’s best defenders in the near future.

Luke Sale is a third-year Bachelor of Journalism (Sport) student at Melbourne’s La Trobe University and a staff writer for upstart; you can follow him on Twitter @lukesale1.