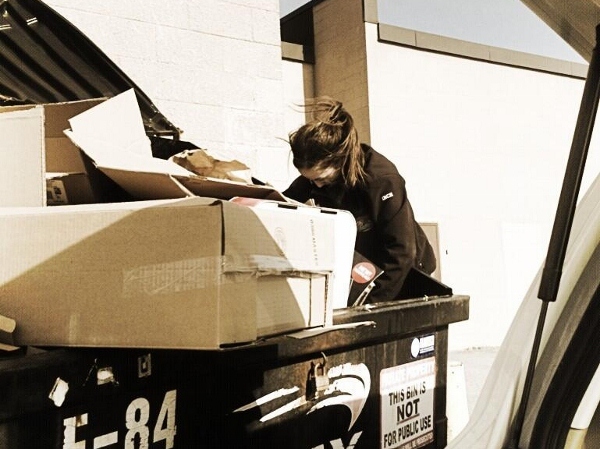 As part of La Trobe University’s The Emerging Journalist program, the upstart team will scour all 200-plus student blogs, picking out one piece per week to publish every Friday. We’ve decided to spotlight Nat Kassel’s, Eating Out of Garbage Bins, and his piece about “dumpster diving.” It’s published below, and be sure to check out Nat’s blog for all his work.

I have been dumpster diving for about two weeks now, no longer obliged to subject myself to the mundane, brightly lit, sterile version of hell that is the supermarket.

I haven’t needed to engage in the hapless process of handing my money over to a despondent, unfulfilled check-out-chick. Or worse, to insert my cash into one of those infuriating self-checkout-machines that invariably detect some kind of error and instruct me to call for the discontented check-out-chick anyway. I don’t need to hand my money over at all.

Money aside, dumpster diving has raised the question for me about whether I still need to uphold my decision to be a vegetarian. I love nothing more than feeling the blood from a rare steak running down my chin; chewing the succulent flesh of a lower species. So my decision to become vegetarian wasn’t because I think killing animals is unforgivably cruel or for want of better health. My decision was an ethical one, mostly based on information I found on the treatment of animals within the factory farm. It’s not so much about animal rights as animal welfare and environmental sustainability. However, I’m not here for a vegetarian rant, if you want information about that, check this out.

My point is that if you don’t buy meat, then you are not directly, nor indirectly supporting factory farms, you are simply cleaning up the scraps. The animal is already dead. The meat in the dumpster will do nothing more than rot and decay. Maybe some flies will get to it but the animal has been killed in vain. Surely it can be better utilised than that. Even throwing it to a dog would make more sense.

So recently, in a cute little dumpster near my house, among piles of mushrooms I came across about thirty sealed punnets, containing three steaks each. I found them around 11pm and they were set to go beyond their use-by-date at midnight. They were still cool. I took them back to my kitchen and cooked a few up for my housemates along with a mushroom sauce. There was nothing wrong with the meat and we enjoyed a nice midnight meal before we froze the rest of the haul. I thoroughly enjoy chowing down on animal products and by exclusively consuming meat that I have found in the dumpster my guilt for eating it has been quashed. It is fairly concerning that we collectively kill animals, butcher them, seal them in little punnets and then, if no one buys them, we throw them away. But I won’t hesitate to capitalise on that wasteful practice. If you’re going to kill it the least you can do is eat it, right? Otherwise it’s just hunting game on the factory floor.

If meat is murder then lets at least honour the animal enough to utilise it.