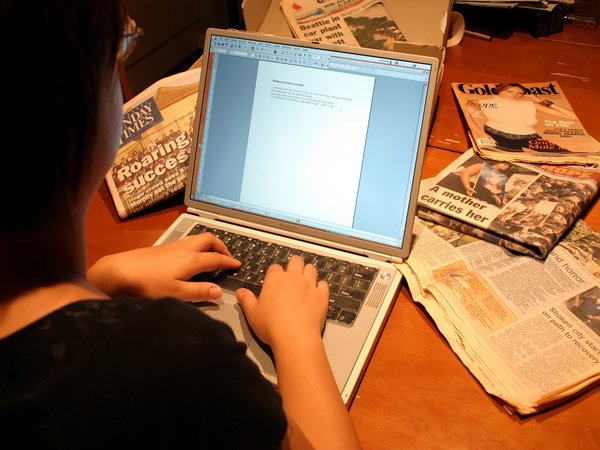 As part of La Trobe University’s The Emerging Journalist program, the upstart team will scour all 200-plus student blogs, picking out one piece per week to publish every Friday. We’ve decided to spotlight Kimberley Thomson’s, The Freak Kingdom, and her piece about the future of paid journalism. It’s published below, and be sure to check out Kimberley’s blog for all her work.

Poverty is romantic in novels.

It conjures Parisian gutters, poetry and absinthe. In real life though, it’s about resorting to one-ply ALDI toilet paper and cheap cask wine. It is a fate that seems to befall too many journalists.

Against the rocky frontier that is the changing media landscape, the ‘pay the writers’ debate seems to spot fire every few months, without resolution. It flared up again recently, when experienced American journalist, Nate Thayer, posted correspondence with The Atlantic, in which they asked him to use a piece of his for free. In Australia, a feud was recently sparked between The Monthly editor John van Tiggelen and his predecessor, editor of Good Weekend Ben Naparstek, surrounding writer pay-rates.

Melbourne-based writer Lee Zachariah has explained the argument of writing merely for ‘exposure’ succinctly, “those who have checked the exposure-to-money exchange rates recently will know that, as Thayer himself pointed out, exposure does not pay bills or feed children.”

Thinking about future prospects is a worrying thought for all those of us who proudly type ‘aspiring journalist’ into our Twitter bios. Is this what we are aspiring to: a lifetime of Fruity Lexia-flavoured destitution?

Nobody has yet devised a successful model to combat the crumbling of traditional news systems. However, recent arrival on the journalism start-up scene, Dutch operation, De Nieuwe Pers (DNP), has introduced a concept that has garnered some attention.

Launched earlier this year, the platform lets users subscribe to the website as a whole for €4.49 per month, or, they can choose individual authors they like and subscribe exclusively to their individual channels. Each journo costs €1.79 a month and the author has sole control over what and how much content is posted.

This model is particularly interesting because it hints at a paradigm shift. It places importance on individual journalists, not the news companies they work for.

Editor in chief of DNP, Alain van der Horst, told The Nieman Lab, “News has become more personal…People are interested in the opinions, the beliefs, the revelations of a certain journalist they know and trust, much more than an anonymous person who writes for a large publication.”

Writing for paidContent, Mathew Ingham, corroborated this “Many readers—particularly younger ones—consume media based not on corporate brands but on individual writers that they feel a connection to, and I would argue that is becoming the norm.”

Will people be willing to subscribe to individual writers?

It seems much easier to sympathise with the image of an impoverished, underfed journalist slumped despairingly over their desk, than the amorphous mass of a hungry news corporation. Let’s just hope reader sympathies drip down to their wallets.

In the same way readers should be able to sympathise more readily with the individual journalist, within this model the journalist can better conceptualise the readers they are writing for – opposed to simply shouting into the void and hoping someone is listening.

“You can be much more personal to your readers,” says writer for DNP Arnold Karskens, and explains that now, “there’s always the pressure of having to give something to my subscribers.”

Although, the DNP model still seems to be in toddler-stage—just learning to walk, there’s still a chance it could topple at any moment. It seems more of an experiment than an attempt at an immediate grab for riches. “Maybe one or two contributors will get a reasonable income out of this in a year, but for the near future, that’s not our ambition,” director of DNP, Jan-Jaap Heij, said in a Nieman Lab interview.

Another online model that has started to employ a technique based on rewarding individual writers is Forbes. In his ‘Inside Forbes’ column (and Forbes should be commended for transparency of this), Lewis DVorkin explains the website’s system: “a writer who attracts 1 million unique visitors [to the Forbes website] a month for 12 consecutive months, with a solid base of repeat visitors, can earn a six-figure annual income,” but adds, “That’s not easy to accomplish.” He notes that in 2012 two of their journalists peaked at about $100,000, there were also “a few at $75,000 and $50,000, and 25 hit the $35,000 mark,” however, “there is a long tail at $10,000.” The latter probably being barely even enough to cover a year’s rent. But this merit-based system is definitely an interesting concept.

If the DNP pay-by-writer model does succeed, or maybe if a beta version of the idea is further developed, what does this mean for emerging journalists?

Most obviously, it signals the importance of crafting a voice. It kind of makes my skin crawl to refer to journalists as ‘brands,’ but it’s undeniable that developing a presence is an invaluable thing to do.

Making people aware of who you are and what your skill set, is arguably the most important facet of being a modern journo.

One of the easiest ways to do this is to get all over Twitter like it’s an 18th-century peasant and and you’re a ravenous skin disease. Publicise what you write and engage in conversations with people you respect.

It also speaks to the value of consistency. Learn how to write prolifically and consistently. It might eventually decide for you the choice between 1ply and 4ply.

It will be really interesting to track the progress of the DNP system; it’s easy to be cynical about journalism-related start-ups, because breaking away from traditional models is still such a leap of faith. But, for your sake and mine, here’s hoping it works.

Kimberley Thomson is a first-year journalism student at La Trobe University. Follow her on Twitter:@yeahswitchblade