Six levels up, past intimidating security, a trendy nightclub belching sleaze and heavy base, a martial arts studio and a boutique clothing store.

I trudge up the stairs amongst similarly dressed people in sensible, warm clothing. As we reach a landing and round the next flight, a couple of skimpily dressed girls peel off and enter the nightclub.

‘Where are they going?’ one asks the other, as she pauses to apply extra glitter.

Neither I or my fellow stair climbers pause to answer, we just continue our pilgrimage to the roof of the building. We’ve got a movie to watch. 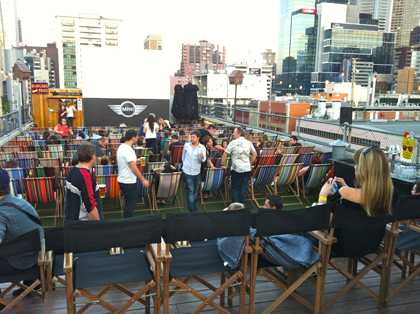 Perched high amongst the towering buildings of Melbourne is the Rooftop Cinema, on top of Curtin House at 252 Swanston st. Much like the Moonlight Cinemas minus the bogans, Rooftop Cinema is as much about the atmosphere as it is about the movie. It fast became a trendy hipster Mecca in Melbourne since opening in 2006.

Lined along a rooftop of bright, green fake grass are 185 comfy hammocked deckchairs. A small kiosk sells hamburgers and fries, and there’s an easily accessible bar to the side. As far as places go it looks fun – there’s a reason that Wallpaper* Magazine voted it the third coolest entertainment experience in the world.

A seasonal highlight, they play one movie a night, and only during the summer months from December until March. Screenings are understandably dependent on weather. The screen is not huge, but adequate, and they play mostly cult flicks with a few recent movies.

‘We try to keep things pretty light,’ says Grant Goulding, the manager of the Rooftop Cinema. ‘We want to keep the experience enjoyable, so we play some recent movies, but a lot of comedy and cult.’

It was the chance to see a cult movie that first drew me up the stairs three years ago, on an early date with my now wife to see The Labyrinth, a memorable Jim Henson movie if you learn to ignore the uncomfortably tight pants of David Bowie.

‘The Labyrinth sells out every year without fail,’ Goulding says. ‘We could play it every night for a week and it would sell. You get a certain crowd that really dig those movies. The Goonies is always popular, as is Stand By Me. But The Labyrinth is our biggest night.’

The second viewing was inducting my sixteen year old sister to the experience, with a screening of The Never Ending Story, a movie that scared the life out of me at the age of five.

On this night, my wife and I were enjoying the offering of Reservoir Dogs, the earliest and best movie of Quentin Tarantino, and a masterpiece of understated cinema.

Turning up early is all but mandatory if you want a decent seat. Plus it gives you the opportunity to down a drink and watch the sun set over the west of the city.

As the bats fly overhead on the warm summer night, the variously inebriated hipsters collect their premium drinks from the bar, snuggle under their overpriced, leased out blankets, sit back in their luxury hammock chairs and enjoy the movie.

It’s fortunate that going to the Rooftop Cinema is seen as an ‘event’. All told you’re probably running up a cost of $40 per person, depending on drinks, so it’s not something you’d do too often.

But there’s no doubt that it’s worth it, once, just to be watching a movie with the cityscape to keep you company. Cradling a glass of Pimm’s loaded with half the vegetable aisle, I settled back in my deckchair and listened to Quentin Tarantino lecture on what exactly Madonna’s ‘Like a Virgin’ is about.

While the grass may be fake, the air is fresh, and the movie is memorable. The Rooftop Cinema is a great way to enjoy the summer while it’s still with us. 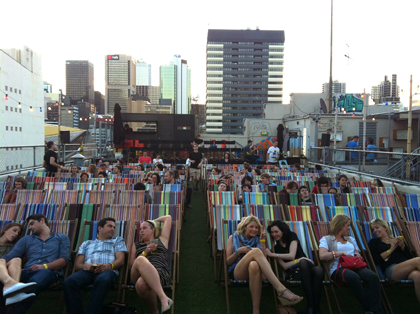