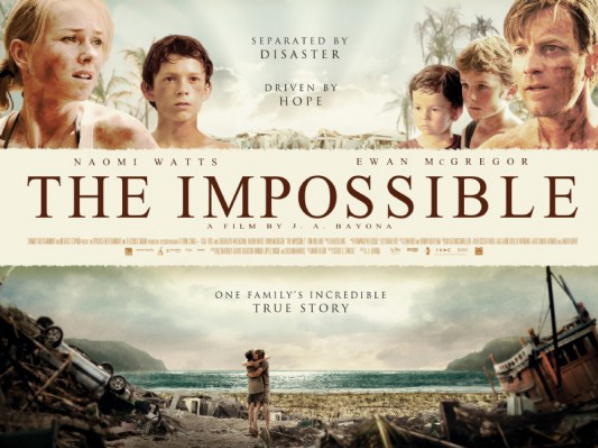 Aussie star Naomi Watts headlines Juan Antonio Bayona’s The Impossible, which brilliantly follows the events of a British family which survives the devastating tsunami that hit much of South-East Asia.

Though some of the facts differ from the real-life events that involve María Belón and her Spanish family, Bayona creates an emotional rollercoaster that leaves no dry eye in the cinema for much of the film.

Based in Khao Lak in Phuket, Thailand, the Bennett family, along with tens of thousands of others, are swept away by a mammoth tsunami that hit the island on Boxing Day in 2004.

Bayona produces a masterpiece scene early in the film in his production of the tsunami as it hits the shore, where the audience is immediately gripped by the reality of the scene and the pure devastation of the situation.

Maria Bennett (Watts) and son Lucas (Tom Holland), who plays a developing teenager who comes of age after the near-death experience, struggle for survival as the family splits when the tsunami hits.

Dad Henry (Ewan McGregor) and two sons Thomas (Samuel Joslin) and Simon (Oaklee Pendergast) also survive and are left guessing whether the rest of the their family are still alive.

Bayona’s dramatic license comes into effect when he uses Henry’s near misses to find his wife and eldest son, to urge the viewer to join him on his quest.

After much searching from both parties and a severe leg infection that almost costs Maria her life, the impossible happens when the family rejoices outside Phuket’s main hospital before flying home.

Watts and Holland prove to be the two catalysts for the film’s success, forming a partnership that seems unbreakable by the conclusion.

Meanwhile, Holland burst onto the international movie scene with a strong, brave performance that landed him the Young British Performer of the Year award at the London Film Critics Circle Awards, as well as the Best Breakthrough Actor award adjudged by the National Board of Review USA.

Overall, The Impossible is a tear-jerker that gives hope to those who believe all is lost.

To think that anyone could survive a tsunami of such devastation is unbelievable, let a lone a family of five who split up before rejoicing in what will no doubt be one of the saddest movie scenes of the year.

In the first big hit of his career, Boyona directs an accurate and visually compelling representation of one of the worst natural disasters the world has seen.

He draws you into the in-depth story of the Bennett family and leaves you on the edge of the seat, with plenty of tissues of course.

And whether the viewer knows about the story before watching The Impossible or not, Bayona still manages to fill the air with both a sense of joy and overwhelming emotion when the family reunites.

As you walk away from this dramatic masterpiece, the Bennett’s story is embedded into your mind and leaves you wondering – what would you do in that situation.