Melbourne prides itself on its vibrant culture, which includes a thriving theatre scene. This scene includes much independent theatre, which is where James Adler comes in with Eagle’s Nest. This is one of Melbourne’s most prolific autonomous theatre companies, located in the happening Brunswick area.

Since leaving university, James have run three theatre companies – with all of them more cooperative ventures than Eagle’s Nest turned out to be.

‘I tried in this first instance to set up a group of people run by all 20 of its members as equal administrative parties to the program. It was a great little socialist ideal, but we talked a lot and we didn’t do very much and I got a bit frustrated with that and gave it away,’ James explained when asked how Eagle’s Nest came about.

With the demise of two theatre companies, both of which finished up what they were doing at about the same time in late 2002-3, James was left feeling pretty dispirited about the whole thing and not really knowing what should come next. Then two things happened at around the same time; a friend of his who had been involved heavily with (but not really running) one of the previous theatre companies gave him a good ‘kick up the arse’, and said, ‘You’re sitting around here feeling sorry for yourself motherf****r. You need to pull your finger out. Stop whining about the state of affairs in the world and go do something, go and run a theatre company. Go and start another one, you’ve started three of them already – what’s your issue?’

Furthermore, when Eagle’s Nest was in it’s early stages, one of James’ teachers showed up with a play that had a small amount of funding attached to it by a woman named Kathleen Mary Fallon. The play was called Buy-back: Three Boongs in the Kitchen. It was a fairly autobiographical retelling of her experience of having adopted an indigenous child and the problems that she dealt with from her white family trying to find ways to reunite him with his black family.

‘So, that’s where the ball started.’

From the very beginning of Eagle’s Nest, James divulged that his plan was to find a way to have an arts-based career, which was at least partially creative and allowed him to earn enough money to survive. Rather than having a specific artistic principle, this was the kind of work that he was dedicated to.

Over the years, Eagle’s Nest gradually evolved. ‘I think within that banner, what I figured out very early on (and this probably goes back to the other theatre companies as well) was that the kind of organisation that I liked and believed in, was an organisation that was an umbrella organisation for supporting artists who were independent and wanted to have a professional career of some kind.’

The interesting history of Eagle’s Nest is actually one of increasingly doing less but becoming more successful.

‘One of our ongoing projects that we perform is the Dickens show that we now do at The Athenaeum each Christmas, and we’ve also just started touring shows overseas.’

The intent this year, it would seem, was to cut the program back to purely a Schools Repertoire program that toured to schools as well as the Dickens show. While they were overseas touring the Dickens show last year, James stated, they ran into a whole lot of artists who also wanted to come and bring work to Australia.

All of a sudden, things popped up immediately. ‘So, this year we’ve decided that we’re going to be a weird combination of theatre and education, fully commercial and professional shows, and touring people from overseas to here.’

When asked what makes Eagle’s Nest different from other theatre companies, James responded by saying that he has often tried to explain to people that the reason that he will survive as an artist won’t be purely because he’s first and foremost an artist.

That commercial question has always been deeply entrenched in Eagle’s Nest,’ he says, ‘where other organisations don’t look at that quite as seriously.’

People often ask him what Eagle’s Nest stand for. ‘I understand where they are coming from, but my answer to it realistically is that it stands for supporting artists to do the work and develop the careers that they’d like to develop.’

‘I believe in the art that other people want to make.’

So, are there any guidelines for this art? ‘As long as you’re not interested in promoting paedophilia, violence against women or racism I probably will support you to say whatever the fuck you want to say.’

‘At the end of the day I don’t ask other people’s permission to make the kind of art that I want to make, I make it. And equally therefore I find that if I’m going to help you make art that you need to ask my permission, it’s really none of my business.’

‘Often, if you really want the project to work that’s the person who started the idea anyway – because you either need to pay a producer or they need to be deeply invested in the project.’

The stage manager is another vitally important component to making a show work, ‘We start by thinking who would be an actor and a stage manager on one of these shows. The next thing is lots of fun stuff like scheduling and organising rehearsals, once you’ve finished casting.’

From then on, the focus is on scheduling, pre-production, creative meetings, scheduling your actual rehearsal process and scheduling the performance process.

‘The pre-production creative meetings are a really important phase in the work because it is where you start to get that real collaboration of ideas coming along together.’

James Adler has found that the theatre industry in Melbourne is something completely unique. ‘Melbourne is prolific in terms of its independent arts scene. I don’t know any other city in the world that I’ve ever visited that has as much independent art as Melbourne does.’

He goes on to explain how Sydney has more medium to professional size theatres than Melbourne. ‘Melbourne only really has the Malthouse and the Arts Centre as it’s professional theatres. Sydney has about four or five of them that are at that level just below the state theatre.’

‘So, the problem in the Sydney industry is that you get out of training, and then how do you get to that next step?’

The problem in Melbourne is a bit the reverse it would seem, since we have a really vibrant culture; there’s a lot of groups that people can get involved in, although the Melbourne theatre scene is cliquey and you need to know people a little bit to get your foot in the door, James believes.

‘Eagle’s Nest’s role in all of that is that I think that it has a better ‘open door’ policy than a lot of other Melbourne companies.’

It seems to have become a little less easy as time goes on James digresses, but the theatre has remained very committed to both having open auditions that welcome all and having a open door policy. 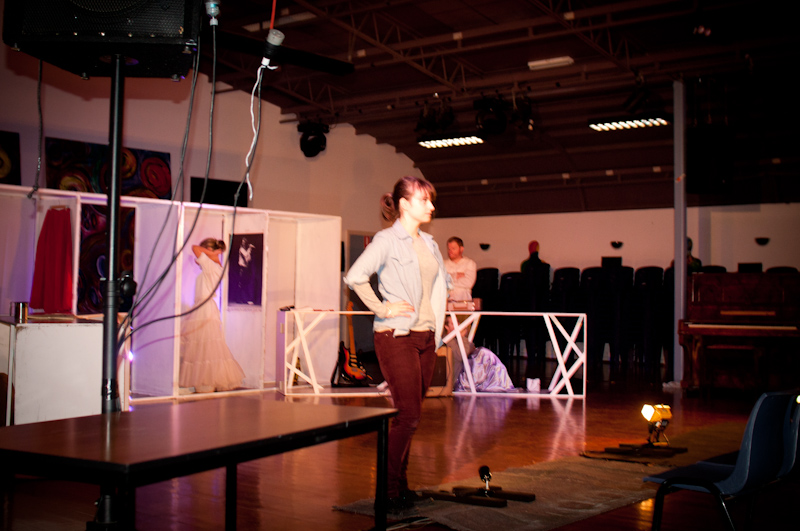