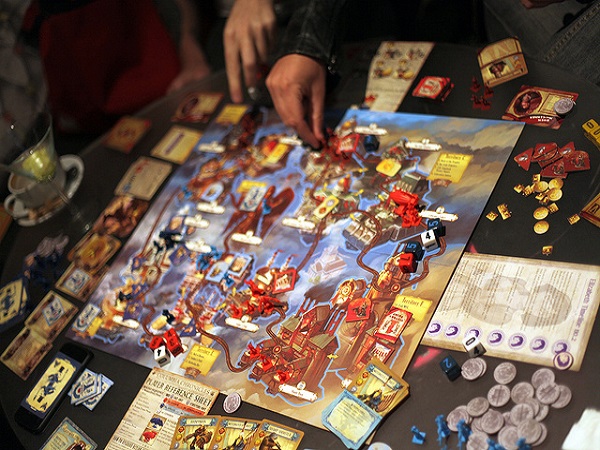 The digital age might be upon us, but not everyone is content with letting technology consume their life.

Tucked away on the second floor of a building on Melbourne’s Lonsdale Street, is a small store where you will find plenty of people who still enjoy playing traditional, non-electronic games. The store and gaming hub franchise is known as Good Games.

Although the store stocks a large collection of board games, role playing games, card trading games and more, unlike other retailers, people don’t have to purchase something to make use of the store’s space.

“The entire purpose for opening up the store was to provide a space for the community,” the franchise’s co-founder and owner of the Melbourne store, Russell, tells upstart.

The large space within the store, filled with numerous tables for game play, allows for people to interact with other gamers in the community and play games face-to-face. It is one of the few stores in Melbourne that offer such a space for game lovers.

“It’s pretty easy to yell at someone through a head piece in an online game but it’s much more thrilling when you can stare them in the face and challenge them,” Russell says.

Although the franchise stays afloat by selling product, its real purpose is to create a community for game lovers, this factor more important to owners than turing a large profit.

“We’re not out to make a heap of money. If we can open a game store in Gundagai or Backwaterville USA or Skara Brae, Scotland – wherever – and make 57 cents a month then that’s probably something we’d do. Why? Because it’s fun. Because we can say we have 14 stores instead of 13.

“What’s the end game in Civilization? There isn’t one. The growing is the game. The process is what’s fun.”

Today, Good Games runs 20 stores across Australia, with three in Melbourne. The staff, who are avid gamers, believe it will only get bigger and bigger.

“I have recently seen an increase in popularity when it comes to people playing traditional games,” says Russell.

“I think that people are getting bored of electronic games and are interested in replaying and reliving the games they played when they were younger, which allowed you to build character and creativity.”

The store holds workshops and tournaments, so those with common interests can meet and develop their gaming skills. This is how they encourage curious people to enter the world of traditional gaming.

This is indicative of why there are so many loyal store regulars, as the warmth and friendliness of the environment has allowed them to befriend others with common interests.

Store Manager, Mark, expresses why he believes this unique store environment is groundbreaking:

“It provides for a sense of community and a better experience for everyone involved.”

Julian Gasparri is a third-year Bachelor of Journalism student at La Trobe University, and a staff writer for upstart. You can follow him on Twitter: @JulianGasparri.