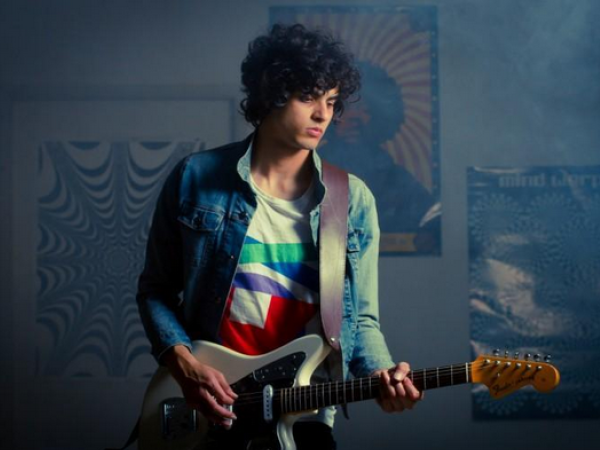 Those are just some of the artists Darren Hart’s solo project, ‘Harts’, has been compared to in the aftermath of the 23-year-old dropping his debut LP Daydreamer this September.

The Melbourne multi-instrumentalist’s seductive blend of funk, neo-soul and alternative rock has created a steady following in recent years. But there was one fan Hart never saw coming.

Hart was unexpectedly contacted by music royalty, none-other than Prince himself — or at least on behalf of his manager via email. The funk legend became enamored with Hart, after stumbling across a couple of his live recordings on YouTube.

“I thought it was someone trying to play a joke, or something,” Hart tells upstart.

“But I kind of had some faith that it could be true, so we emailed back and forth and when I realised it was legit I was like ‘far-out, this is amazing’.”

After forwarding on his phone number he received a phone call “out of the blue” from The Purple One.

“I recognised his voice instantly,” he says.

Hart was cordially invited to jam before his self-confessed idol – the creator of anthems like ‘Purple Rain’, ‘When Doves Cry’ and ‘Kiss’ – in the States.

Since his return and subsequent album launch, media coverage for ‘Harts’ has skyrocketed. Reviews of Daydreamer have been published in an array of major news publications as well as Australia’s Rolling Stone magazine.

The critics’ overwhelming positivity was given further backing last week, with Harts’ debut offering nominated on the long-list for the Australia Music Prize.

The surrealism of the past year is enough to make any head spin. And in an effort to stay grounded, Hart says he often reflects on his humble beginnings.

Born in Chennai, Hart spent several years in India as an infant, before he and his family relocated to Melbourne.

Hart says he sometimes ponders how his life would have turned out if he hadn’t moved to Australia.

“It would be a lot different,” he says.

“It’s a completely different country. I’m not even sure I would have had the opportunity to pursue music.”

Although Hart cannot recall his time living in India, he believes his family had no problem adapting to their new surroundings in Melbourne.

“We’re Anglo-Indian … so we’re very western in the way we live anyway,” he says.

When digging deeper into his childhood, Hart revealed sport, rather than music, ran strong through the family’s bloodline.

“My parents were kind of very famous Indian athletes in track and field,” he says.

“Athletics and track and field is kind of what my family does.”

It was only when Hart reached “15 or 16” years of age that he traded in the baton for a pair of drumsticks.

Originally he started out playing drums, eventually expanding his repertoire to include vocals, keys and guitar.

But despite his obvious natural talent, Hart was initially skeptical of how far music would take him.

“I was a bit of a daydreamer [in school] … I still tried, but just never really focused on my studies as much as sport and, a little later in school, music,” he says.

“I got to Year 12 and left school and I kind of knew I wanted to pursue it [music]. But I didn’t know then I would be able to turn it into a career.

“It was only recently where I realised it might be possible to take it very seriously.”

Hart believes he has Prince’s chance discovery to thank for fast-tracking his career.

“Prince has been the catalyst in getting all this publicity,” he says.

I also really love this photo of @harts_! that Fender guitar is a beauty! and the Jimi Hendrix poster is awesome! pic.twitter.com/jfdzGgnyaQ

Regardless of the hype that Prince’s association with Hart has fostered, it is clear he has incredible ear for music and sound production.

But how does this ‘one-man band’ function in a live setting?

The aid of sound looper has given Hart the opportunity to simultaneously cover the backing track, while hitting the home run with his high-pitched vocals and groovy guitar riffs.

Hart believes this aspect gives his act an individual edge.

“I really like the fact that I do that [solo live show]. It’s kind of unique, from the feedback I’ve been getting.”

However, he says he harbours a preference to the more traditional band accompaniment and will explore it as an option for the future.

“In time as the Harts name develops … and I can afford to bring a band with me to tour, I think I’d definitely do that over the solo shows,” he says.

But for now it seems live-music goers will have to be content just watching the wunderkind weave his unique brand of slick and soulful music on his lonesome. Boohoo, right?

You can see Harts perform at the RUBIX Warehouse, Brunswick, on November 3.

Callum Godde is a third-year Bachelor of Journalism (sport) student at La Trobe University and the sports editor of upstart. You can follow him on Twitter:@Calgodde