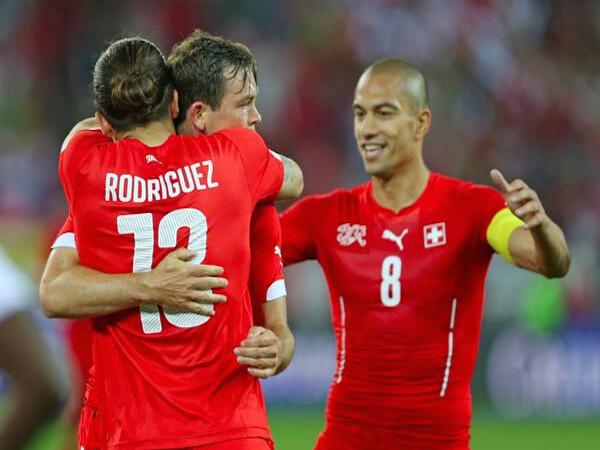 FIFA’s much-flawed rankings system has reared its head once more.

To avoid having the planet’s top eight ranked nations all falling in the same World Cup groups, FIFA uses its own ranking and seeding system to divide these eight, using an incredibly flawed formula.

With no, undeniable household names to reel off, Switzerland are considered the top side in their group and will face 1998 World Cup winners France, as well as Honduras and Ecuador in Group E.

Many football fans are questioning just how Ottmar Hitzfeld’s side have reached the top six, let alone the top 10, or maybe even 20. But a deeper look highlights a side that is in good shape.

Switzerland advanced through the qualifying stages without defeat, lost just one match in 2013 (a 2-1 away loss to South Korea) and only two games in 2012, one of which was to Argentina.

Going further back and the Rossocrociati only suffered one defeat in 2011.

Quite a record, but now the right question to ask is how have they done it?

Firstly, there is stability at the top. Hitzfeld has been in charge since 2008, so his philosophy is well entrenched among the players who will line-up first against Ecaudor inside Brasilia’s Estadio Nacional on June 15.

Secondly, their World Cup squad is compiled with talented players scattered among all of Europe’s top divisions.

Diego Benaglio is Wolfsburg’s No.1 ‘keeper behind their rising star left-back and compatriot Ricardo Rodriguez. Stephan Lichtsteiner bombs up and down Juventus’ right flank, young centre-back Fabian Schar is a key name in FC Basel’s emergence in European competitions and will most likely be partnered by the well-traveled Steve Von Bergen in defence.

In midfield, Napoli is home to three Swiss central midfielders. Most will know captain Gokhan Inler. He’ll be joined by Valon Behrami. The third of these midfielders, Blerim Dzemaili, will be used off the bench.

Up front, the likely pairing will be Bundesliga-based Admir Mehmedi and Josip Drmic. The former is just 23 and scored 12 goals on-loan at SC Freiburg this year, while Drmic scored 17 club goals and was Switzerland’s leading scorer in qualifying.

Though it’s out wide, in the form of starman Xherdan Shaqiri, that The Guardian’s Swiss football writer Jill Zimmerli tells upstart that Switzerland has their second leader behind Inler.

“Although Shaqiri didn’t play much for Bayern this season due to injuries, he is still vital for the Swiss team. There is no doubt that he’s in the starting XI and, next to captain Gokhan Inler, he is one of the leaders of the team,” says Zimmerli.

“He showed his importance in the friendly against Jamaica. After he came on he brought more pace to the game and even scored a goal. So Xherdan will definitely have an impact.”

The above represents a strong starting lineup and Zimmerli says squad depth shouldn’t be an issue for Hitzfeld either.

“We have some good back-up players like [Mario] Gavranovic, [Haris] Seferovic or [Tranquillo] Barnetta and, apart from Seferovic, they all played regularly and had good seasons with their clubs,” says Zimmerli.

In Phillipe Senderos, John Djourou and Reto Ziegler, Hitzfeld has capable back-up in defence too, while midfield depth is in abundance, particularly if Granit Xhaka can escape an injury cloud.

After famously being the only side to beat Spain at the 2010 World Cup, Switzlerand lost to Chile and were then eliminated in the group stage with just one goal scored.

The 2014 tournament presents an opportunity to make amends and Zimmerli says their fans are cautiously optimistic.

“We expect them to survive the group stage,” says Zimmerli. “Everything else would be a disappointment. But we know how difficult it will be. Although we won against Spain, we didn’t qualify for the next round.

“Now we face Honduras again. Since we have strikers who actually score goals, we believe that the team can finally win some games. So there’s hope that Switzerland will do well this summer.”