Figures moved amongst the shadows of the theatre, lithe and probing as they stalked through the aisles of seated people. Their eyes glistened in the dark, their tails flicked restlessly behind them and their ears were silhouetted against the greenish glow of the empty stage.

Suddenly, the orchestra began playing familiar, lively and impish notes. The figures scattered out of sight, disappearing into the invisible nooks and crevices in the dark mass of debris on the stage. 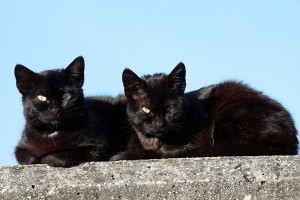 Since 1981, Cats has been charming audiences around the world. It has accumulated a record number of awards including two Olivier Awards for ‘Musical of the Year’ and ‘Outstanding Achievement of the Year in Musicals’, and seven Tony Awards. Its 21-year West End run in London and 18-year Broadway run broke records and Cats is still the second longest running Broadway production.

Composed by Andrew Lloyd Webber, it’s based on T. S. Elliot’s Old Possum’s Book of Practical Cats, a collection of poems that Webber adored as a child. The songs are Elliot’s verse set to music. However, the director of the original West End and Broadway productions, Trevor Nunn, wrote the most famous song from Cats, ‘Memory’.

After the overture, the cats congregate on the stage. They sing ‘Jellicle Songs for Jellicle Cats’, in which they explain the Jellicle tribe and their purpose. Tonight it’s the Jellicle Ball and the tribe leader, Old Deuteronomy, will choose a cat to be reborn into a new life on the Heavyside Layer.

Another song, ‘The Naming of Cats’ explains how the different cats of the tribe are named. With names like Jennyanydots, Grizabella, Mr. Mistoffelees, Rum Tum Tugger, Bustopher Jones and Macavity, those with no imagination could dismiss the musical as childish nonsense. But, with Webber’s eclectic music, highly athletic dancing and creative costumes, it is only the most hardened minds that would do so.

As the musical progresses, Webber’s music ranges from jazz, to classical, to pop, rock and hymnal songs. Most of the songs are about the different cats, explaining who they are and what they do, performed themselves or in the third person by another cat.

Tonight I was seeing Cats live for the first time. Because I had seen the Webber-produced 1998 video production of the show numerous times, I was sitting eagerly in the audience, waiting with anticipation for my favourite my characters to introduce themselves.

There’s Jennyanydots (The Gumbie Cat), a fat tabby cat who “sits and sits and sits all day”. The Rum Tum Tugger (my favourite) is a naughty, flirtatious tomcat who “will do as he do do and there’s no doing anything about it”. He is portrayed as the feline equivalent of a rock star and has many adoring lady cats pawing at his legs as he sings.

Grizabella is an old, shabby cat who was a glamour cat in her youth. But, she left the Jellicle tribe to see the world and upon her return to the Jellicle Ball, is shunned and hissed at by the other cats. It is she that sings the poignant song ‘Memories’.

In the song ‘Gus: The Theatre Cat’, we hear from a very old cat who used to be a famous stage star. His story is told by Jellylorum (named after Elliot’s own cat). The Magical Mr. Mistoffelees is a black cat, said to have magic powers. His “conjuring turn” is twenty-four fouettés en tournant.

Cats is by far one of the most physically demanding musicals for dancers. The choreography is highly athletic and the dancers must simultaneously sing. Originally developed by Gillian Lynne for the 1981 West End production, her choreography was based on months of cat watching. Today, much of her work survives, performed by talented dancers who spend much of the time on all fours.

Along with the feline-like movements of the dancers, their hand-made costumes help the audience visualise actual cats. Most of the costumes are comprised of a Lycra body suit, each painted with striking and individual markings, a wig and tail. Wigs, made of yak hair, are ‘glued’ onto the dancers prior to their performance and are valued at up to $4000.

The set is a shadowy junkyard – there’s a large tyre, an old car, an oven-like container, pipes and an old boot. The cats often disappear into the mass of junk when Macavity, the only villain in the show, is lurking. Unlike most high-scale musicals, the set remains the same throughout the show.

With only a vague plot, it’s a credit to the production team, the dancers and Webber’s music that Cats has been so successful for so long. Sure, it requires an imagination to enjoy the show. But, in an era of long work hours, social networking and financial struggle, imagining the Jellicle world is an escape.

Kelly Theobald is an editor of Upstart and a musical theatre addict. This piece was originally published on her blog, Music Meets Girl.