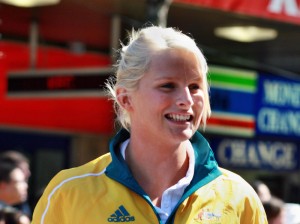 The manner in which Leisel Jones has handled herself in the past week has added weight to something we already knew – she is all class.

Amid a whirlpool of speculation surrounding her physique and fitness for the 2012 London Olympic Games, Jones finished fifth in the 100m breaststroke final.

For an athlete with the stellar record that Jones boasts, a placing outside the medals may be misinterpreted as a substandard performance. But when you dive below the surface, her achievement is crystal clear.

Having won three gold medals, four silver and one bronze across four Olympics, Leisel Jones is undoubtedly an Australian champion. Her sheer success dictates her status as a swimming great, but it is her sportsmanship and self-awareness that elevates her into the highest echelon.

Following the breaststroke final, Jones could have been forgiven for feeling disappointed. The opportunity for Olympic glory is fleeting at the best of times. Even more so at 26 years of age in a sport where the peak of your powers typically arrives as an adolescent and longevity is rare.

Instead, her reaction to defeat was gracious and realistic. Mark Cavendish should take notes.

Understanding her position as a swimming veteran and that her best is in the past, Jones was beaming with pride at her fifth placed finish.

‘My focus has totally changed at these Games. For me it was all about the changing of the guard and handing over to the younger swimmers,’ Jones says, as reported by the Herald Sun.

‘So stoked just to be in the final, that was better than I ever could have hoped for… I gave it my best shot and left nothing in the pool.’

The transition from being top of the pile to simply part of the pack can be challenging for champion sportspeople. Some hang on in a state of denial, fuelled by the stubborn belief that their best is still unmatchable. Others quickly recognise where they stand and as a result, enter the vaults forever untainted.

Jones’ positive attitude and recognition of her position in the swimming landscape ensures she will walk away as the latter, regardless of when she hangs up the swimming cap.

We are witnessing the changing of the guard in woman’s breaststroke, yet it may prove to be in more ways than one. While the previously dominant force of Jones has relinquished her reign, her successor could be the next breaststroking prodigy.

Like Jones at the 2000 Sydney Olympics, Lithuanian Ruta Meilutyte has claimed the Olympic 100m breaststroke victory at the tender age of 15. The time of 1:05.47 just pipped American Rebecca Soni by .08 of a second, with Japanese Satomi Suzuki winning the bronze. Jones stopped the clock at 1:06.95.

For all the plaudits rightfully directed at Jones, the heavy focus on her body prior to these Games threatened to overshadow what is likely to be the last hurrah of a glittering career.

Images and footage of Jones leading up to London prompted queries from sections of the media regarding her physical preparation. As expected, former and current athletes were quick to jump to the defence of ‘Diesel,’ ironically Leisel Jones’ nickname.

By making the final and pushing for a medal, any proposed merit attached to the overweight suggestions were largely dispelled. However, the predicament has still highlighted a broader tendency.

It is logical to expect the spotlight to be shone brightly on Australia’s Olympic representatives, or any sportsperson of note for that matter. But the added pressure heaped onto Jones as a direct result of the media frenzy is systematic of the widespread willingness to take the gloss off Australia’s shiniest stars.

Jones is one of Australia’s true legends. The first Australian swimmer to compete at four Olympic Games, she was considered a strong favourite to be Australia’s flag bearer before the announcement that Opals captain Lauren Jackson had been bestowed the honour.

Given the mature way she continues to present herself, it is difficult to justify the recent slurs. A great role model deserves to be celebrated, rather than raided in search of flaws.

Jones still has an important role to play for Australia in the upcoming 4x100m medley. With the heats commencing on Friday, the Aussies will be looking to replicate their gold medal performances from the 2004 and 2008 Olympic games.

America are overwhelming favourites to halt the streak and China are considered a significant threat, but Australia remains a strong chance of featuring on the dais.

The Queen of breaststroke will be looking for another piece of jewellery to hang around her neck. It would be a fitting final splash.