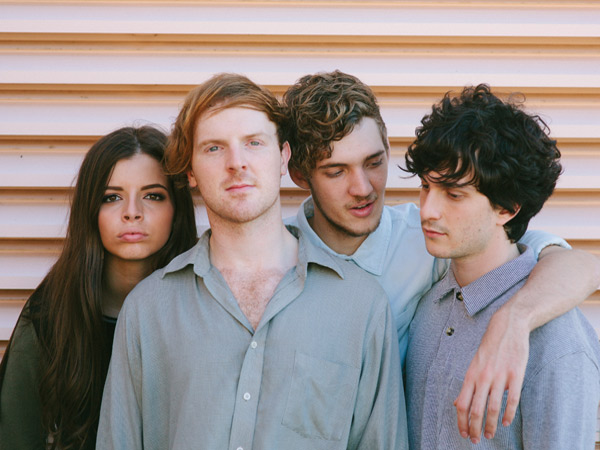 For any young musos with ambition in their veins, the chance to go on tour has always been touted as one of the greatest experiences possible.

In terms of touring Australia, The Jungle Giants have experienced most of what the country has to offer. In the last five years the Brisbane outfit have supported big names like Ball Park Music and Two Door Cinema Club, as well as playing at both the Falls Festival and Splendour in the Grass.

With their debut album Learn to Exist soon to be released, this promising four piece are about to embark on a 14-show headline tour around the country, playing capital cities and country towns.

upstart chatted to the band’s frontman Sam Hales, who provided an insight into touring Australia as a young band in 2013.

“We always commit wholeheartedly to having fun on tour,” Hales admits. “We like to party and hang out with friends. The more times we tour, the more friends we make in each city too.”

“There’s been a few times when we’ve toured and come back to Brisbane, and we’ll just invite the bands back to our house and have a pool party or something. We did that with The Vaccines — they came over and we had a barbeque.”

While the partying side of things might not have changed much, a supporting tour is still a crucial time for young bands and they need to take it quite seriously. As Hales explains, it’s a chance to win over new fans, as well as an opportunity to hone your live performance in front of some more challenging crowds.

“We’ve played in places where nobody knows who we are and stuff like that. Playing regional, and I think we played in Mackay once — it was with Boy and Bear — and we were really early in our career and nobody really knew [us], ” Hales admits.

“But I guess what we focus on is just having a good time, and if the crowd sees us having fun, they’ll have fun.”

With the amount of music available online, finding wider success is an incredibly difficult process for bands these days. While The Jungle Giants had the backing of a major radio station like Triple J, less fortunate bands have to rely on touring to spread their name — and going on the road is an expensive process.

Between hiring a vehicle big enough to fit an entire band and equipment, and having to feed everyone for two or more weeks, many young artists struggle to raise enough money to send themselves on an extended tour.

Hales’ acknowledges that the funding side of things “hasn’t been too bad” for the band, but they’ve still established an effective method of saving money that upcoming acts should try to emulate.

“The first EP’s sold pretty well, I guess, and any kind of money that we make just goes straight to the band kitty.

If we want to go on a big tour, we’ll pull out the money if we think it’s worth it. We’ve been in a pretty lucky situation where we could fund the album ourselves – it’s kind of like band money. But sometimes it is pretty expensive to go on tour, if you’re not getting paid much.”

In 2013, saving money at the beginning of your career seems to be a necessary sacrifice if you want to make it as a band. Unfortunately, that alone is probably enough to drive many emerging musicians away.

However, as The Jungle Giant’s can attest, young artists today need to be persistent. The search for national recognition requires gigs and touring, rather than hoping for a lucky break.

Hales certainly doesn’t regret the graft they’ve had to put in as a band.

“When we first started out we just drove everywhere – we drove to Adelaide, we drove to Sydney and Melbourne. We wanted to go on tour and we wanted to play the shows – it’s all worth it.”