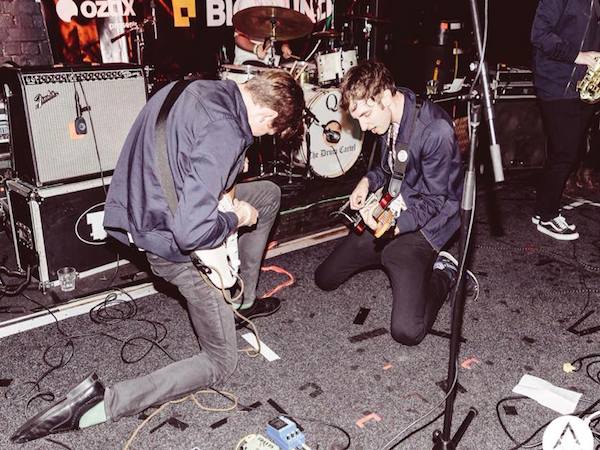 When chatting to Jeremy Neale, it’s difficult to ignore the fact that he simply radiates positivity. Combined with his sharp wit, humour and delightful smile, Neale, 28, is nothing short of a poster boy for Brisbane’s music scene.

Born and bred in the city’s northern suburbs, Neale has successfully managed to charm his way into Australian hearts with his indie pop musings. First venturing into music during his high school years, Neale took on roles of percussion before embracing the guitar.

“My best friend at the time was getting drum lessons – she’d teach me what she’d learnt when we hung out,” he tells upstart.

“But in high school, everybody wanted to be a guitar hero – so you know, I got my shred on. My first gig was at school playing covers. I remember I was playing drums, and halfway through the set some teacher came in to tell me that I was doing it wrong… such a strong start.”

Pairing up with Simon Ridley and Shane Parsons (also known as DZ Deathrays), 2008 saw the culmination of pop power act Velociraptor. First consisting of three, it soon grew rapidly. Today, the act accommodates a regularly rotating line-up of up to 14 members.

“Nobody would give us the time of day outside of Tuesday night slots at Rics Bar,” Neale says.

“I guess this was a blessing though, because we got to meet a bunch of other bands who were just getting started and we pretty much created a scene of our own. Through a lot of drunken adventures, I ended up asking a lot of these people in the scene to join the band.

“Plenty of stupid things seem like a good idea when you’re drunk – but hey, they all agreed and here we are today.”

It seems like Neale’s a guy that never sleeps; whirring like a machine as he pumps out music and flies state to state. This year, Velociraptor released their self-titled debut album, and Neale sent Iron Maiden-esque track ‘Stallion Rider’ into the realm – a track that is a strong contrast from all his previous work.

“I was knocked out with the flu and in extreme fever town”, he explains.

“In fevered states, I generally end up placing too much importance on an idea that I wouldn’t normally pursue to completion. On this occasion the idea was ‘Stallion Rider’ and within a day of writing it, I’d booked in to record. It’s the most fun I’ve ever had in the studio – it’s probably the highlight of my career.”

Last year, however, saw the Neale’s debut solo EP, In Stranger Times – something from which he learnt a number of lessons from.

“Overall, it taught me that I need to get better at making plans, instead of finding myself in the thick of things and making reactive decisions instead of well, thought-out ones,” he says.

“I ended up recording about 15 songs and then only using six because I’d get excited every time I wrote something new and head straight to the studio to record it. Unfortunately recording isn’t cheap – those songs are probably still sitting on a credit card somewhere.”

“Hard up for cash” (as Neale describes it), the musician undertook a number of other occupations to make ends meet. As well as serving as a bartender, you can find him jumping behind the turntables and embracing his DJ alter ego, Bris Springsteen.

“Being a musician creates way more bills than it pays and drunkenly, I asked a particularly rad bar manager if they could give this party dog a job,” says Neale.

“Before I knew it, I was getting people drunk responsibly for a living. It’s hands down the best job I’ve ever had outside being a mostly full-time songsmith.”

Now, six years since first making his mark on Brisbane’s scene, Neale could somewhat be considered local royalty, building a cult-like status, particularly through his Facebook. But in all honesty, he seems quite humble about it all.

“I don’t exactly know how I’m perceived by the music community but if it’s as well as you say, then that’s good news,” he laughs.

“I guess I’ve just been a part of it for awhile now and I never shy away from helping others looking to get started. I guess that’s why I’m present in a lot of stuff to do with the city.”

A man who didn’t accept a music career as a possibility until a few years ago, things are only looking up for Jeremy Neale. With a potential debut album in the works, constant touring and a plethora of positive partying, the artist is practically reaching for the stars – and you can say he’s Neale-y there.

Meaghan Weiley is a second year Bachelor of Journalism student at La Trobe University. You can follow her on Twitter: @meaghanweiley