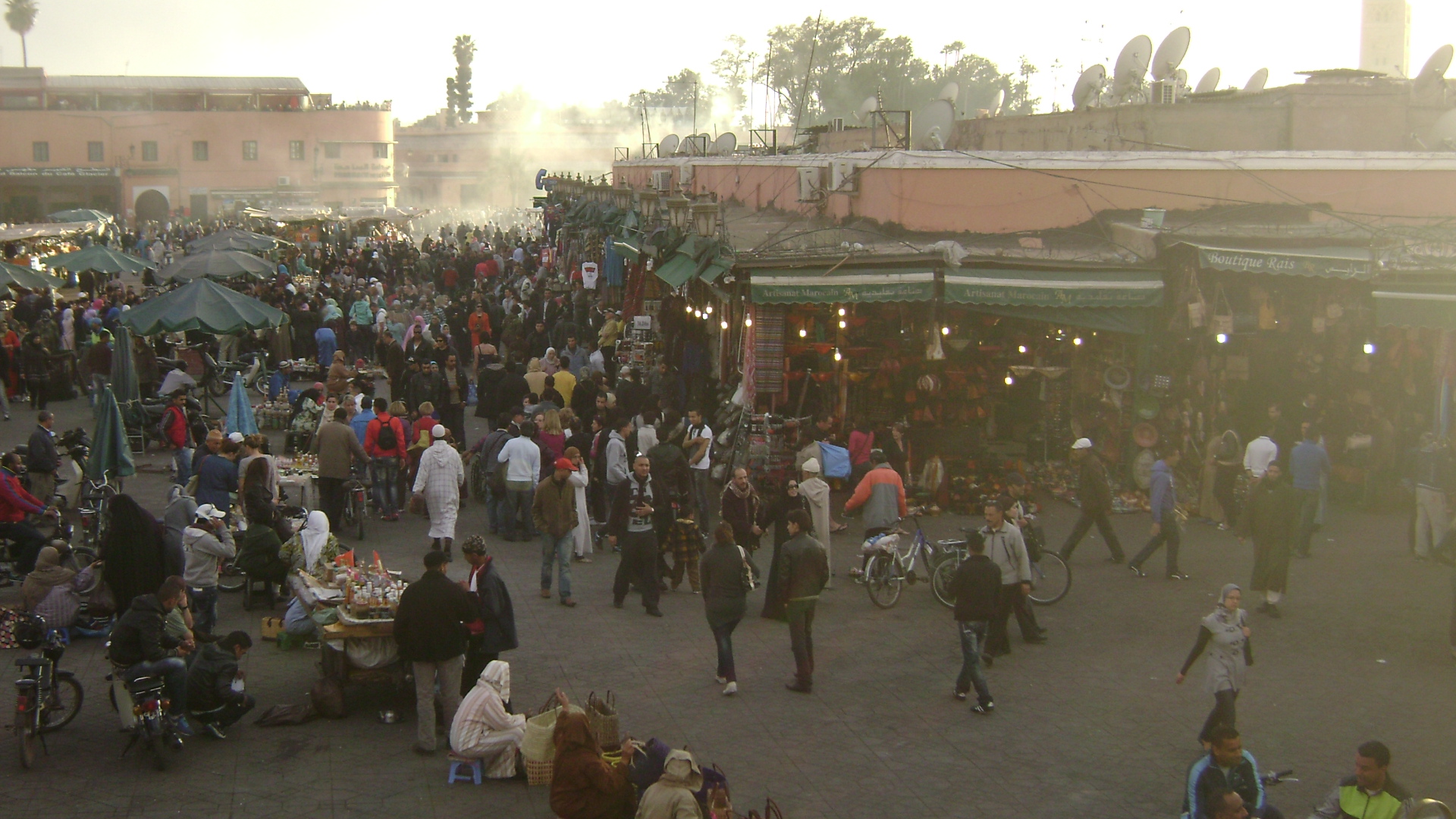 The man sits on a mat in his tasseled hat playing the Arabic flute, and I laugh, and think it sounds like snake-charmer music. I double-take and see three cobras, flared, ready to strike, at his feet.

Morocco is not for the feint at heart, that’s for sure. But if you’re looking for something unlike anything you’ve ever seen before, then it’s worth a look.

I had been travelling Europe alone for months, and I had a routine, and it worked, and I liked it; get to the city, find a hostel, do a walking tour, see the sights, hang out, meet people and party.

I arrived in Marrakech at 11pm and approached the information desk at the airport for some advice. I looked at the young girl expectantly as she chatted away in Arabic on her bunny-eared blackberry. She finished her conversation, unwrapped a piece of chewing gum, considered it, put it in her mouth, looked up at me and said, ‘Salaam’ (more a question than greeting in this case). ‘Salaam,’ I responded, ‘I just wanted to know if there was a particular type of taxi I should get, or whether any out there would be fine?’

‘Go out there and ask them if you don’t believe me.’

She works at the airport, she must be telling the truth.

Lesson number one in Marrakech: the truth here is not so black and white, it’s a flexible kind of grey. Whether it’s real silver, real leather, really vegetarian, one can never be quite sure.

An hour, 300 Dirhams, some silent prayers, and some very helpful strangers later, I happened across my hostel.

Lesson number two in Marrakech; there’s no such thing as a free anything. Everything, even directions, has a price.

Very quickly I learnt that everybody here has found a way to utilise tourists to some effect, and unlike Europe, you can’t hide; they know every face in the city, whether you’ve been there before or whether you’ve just arrived. You turn left when a young boy tells you that the way to the square is left, and you get a slap if you don’t give him money. You take a photograph of the man walking around with monkeys in nappies, there’ll soon be a hand under your nose asking for your cash.

And they’re smart, they know the exchange rates. If you try to fob them off with 5 Dirham, they respond, ‘50 cents? I want more,’ and they won’t leave you alone until they get it.

Acrobats applaud each other as they flip and somersault through the air, while you watch on from a restaurant. A man jovially swings his head around making the tassle on top swing around and around. A man has a donkey. A man has a baby camel. Apparently all of this warrants a price.

All of this contributes to make Marrakech the unforgettable, fascinating, can’t-peel-my-eyes-away city that it is, and one simply has to learn the rules. Lesson number three: pack small change because this atmosphere isn’t free.

I was in shock for the first day, at least, wondering why I had chosen to come to Marrakech. I wracked my brains trying to think of what so-and-so had told me about it, I’m sure I’d heard what’s-his-face say it was good, why else would I have come here? Maybe I had it confused with somewhere else?

On my second day exploring, getting tricked by the locals, being told I had ‘a nice arse’ by every second man on the street, I started to get it. These men weren’t crazed perverts; they just thought it was funny. These salesmen weren’t trying to attack me; they were trying to make a living for their families in the fastest-growing industry in the country.

Once I knew how to say ‘thank you’, ‘it is lovely, but I already have one,’ and ignore the arse comments and constant proposals of marriage, everything started to fall into place and I was better able to enjoy the place for what it was, and get over the sheer shock of it all.

So lesson number four (and the most important of all) is just to enjoy yourself. Smile and relax, they don’t want to hurt you after all; they just want your money.

Alexandra Hansen is a writer, web editor, literature student and adventurer. You can follow her on twitter: @allyhan6, or read her travel blog, Backpack and Sewing Machines