When I tell people that earlier this year I stayed at Buckingham Palace, I’m usually met with a raised eyebrow and a meaningful look of disbelief. 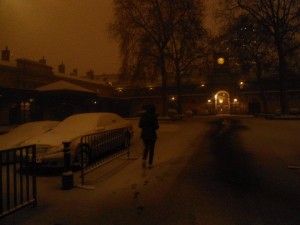 Inside the Royal Mews

‘Tell her she’s dreamin,’ I can almost hear them thinking.

This popular view was also held by British customs. To say that they were unimpressed with my story is, quite frankly, an understatement.

I grew up on a healthy diet of Monty Python, The Vicar of Dibley and The Young Ones. Somewhere along the way, I developed the notion that the British had a sense of humour. This was reconfirmed several weeks ago when the highlight of London Olympic Opening Ceremony involved nothing more than Rowan Atkinson and a piano.

Why, then, was this British wit absent on a cold January morning when a friend and I were at a Parisian train station simply wishing to travel back across the pond?

In order to re-enter the United Kingdom, we had to undergo the usual interrogation involved at a customs office before crossing a border. I’ve learnt that you do not mess with these guys – they have the legal right to frisk you.

When asked about where we were staying, both my friend and I told separate customs officials that we had organised accommodation at Buckingham Palace.

For some reason, they didn’t believe us.

It is understandable that one would question how two young girls, wearing rumpled clothing and carrying all their worldly goods in ugly green backpacks, became guests at Her Majesty’s royal residence in London. The image doesn’t exactly fit.

Even after we’d assured them that we were in fact staying in the Royal Mews through a familial friend that worked there, that I had been studying in the UK for five months and that yes, my friend had secure employment upon returning back to Australia, my friend was still required to unpack most of her luggage in the middle of Paris Norde in order to pull out documentation (well, a plane ticket) that would conclusively prove that two young women with no criminal pasts were telling the honest truth and weren’t actually going back to England finish off what Guy Fawkes started all those years ago.

Needless to say, we were eventually admitted entry but had missed our train. We were fuming, but still managed to cross the Channel that day and spent the night snug and warm in the confines of Buckingham Palace.

Other than a wasted train ticket and a sore temper, we came away from that experience with a story about ‘that time when we weren’t allowed back into England…’

We also learnt a hard and important lesson that day; customs officers have no sense of humour.

Our stay at the Royal Mews was a pleasant respite from the endless chain of backpacker hostels and dives where you were liable to be woken up at all times of the night of by a group of rowdy Spaniards, and where there always seemed to be a slimey substance of questionable origin on the floors of the communal bathrooms. We didn’t get meet any royals or pet any corgis, but instead spent a week in the comfortable apartment of a Melbournian family that had relocated to London several years ago when the father became a coachman for the Windsors.

We did get to meet some of the Windsor greys, and heard that the Queen still insists on driving her own Range Rover despite her advanced age.

In hindsight, it is understandable why so many people are quick to scoff at my claim that I lodged at Buckingham Palace.

If only customs had treated our story like the black cab driver that drove us from Kings Cross to the Mews that night.

He asked, in a thick Cockney accent, whether we were ‘Colonial royalty.’

Laura Hurley is a third year Bachelor of Journalism student at La Trobe University and is the current editor of upstart. You can follow her on Twitter: @laurajanehurley