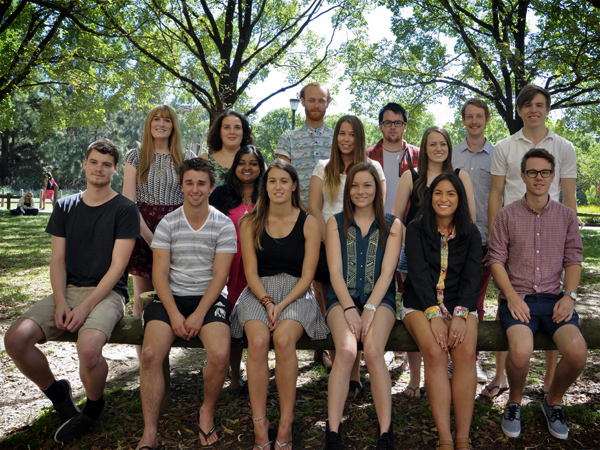 Today a new editorial team is taking the helm of our magazine.

A diverse and versatile bunch they are. It is our biggest team to date, and they will continue to build and develop our publication. In addition to our new design, we are introducing dedicated section editors and a photo editor in 2013. While we already had a dedicated sports editor in the past, we experienced such a dramatic increase in content across the board in 2012 that we’ve had to step things up a little. This of course very exciting, so please keep sending us your pieces and your pitches on contact@upstart.net.au. Our team is looking forward to hearing from you.

We would like to thank our outgoing summer editors, Dean Casey and Ashley Shenker, for keeping a steady ship over the past months. We wish them all the best in their future endeavours.

Liam Quinn is currently completing his Bachelor of Journalism degree. He has been a regular contributor to the magazine throughout his tenure at La Trobe University, and last year led upstart’s coverage of the US Presidential Election, while on exchange at Michigan State University. Liam has worked for BackPageLead — Australia’s leading sports opinion site — for two years, covering a wide range of sports both home and abroad. He also has a weekly podcast that focuses on the world of US sports. Follow him on Twitter: @liamquinn23.

Betony Pitcher is in her final semester of a Bachelor of Journalism at La Trobe University. Having previously worked at Leader Community Newspapers, she would love to continue her career in print and online media. Just like her hero from the film Almost Famous (teen journalist William, not Penny Lane), Betony’s dream is to some day write hard-hitting political and music journalism for Rolling Stone Magazine. Find her on Twitter @betonyjade.

Eric George is currently completing a Graduate Diploma of Journalism at La Trobe University. Eric completed a Bachelor of Oenology at the University of Adelaide, but also maintains a number of interests alongside his passion for wine. He has regularly contributed to a number of sports journalism websites, produces a weekly podcast for the Back Page Lead, and maintains a keen eye on US sports. Eric was also a key component of upstart’s 2012 US Election coverage. Twitter handle: @ericpaulgeorge.

Hannah Rabe is currently in her third year at La Trobe University studying a Bachelor of Journalism and a Diploma in Japanese. She hopes this combination will see her work as a foreign correspondent in the future. While her everyday interests are in writing on fashion, lifestyle and travel, Hannah has also worked in television news, helping to cover the recent Tasmanian bushfires for Southern Cross News in Hobart. Hannah has her own blog, covering the highs and lows of Melbourne’s second-hand and vintage markets. You can follow her on twitter @hannahrabe1.

Paul Bastin is final-semester Bachelor of Media Studies student. He is an aspiring sports journalist and has a strong passion for AFL, soccer, basketball and cricket. Paul thoroughly enjoys his voluntary roles at SEN radio, socceranchor.com and AFL media. He loves the Collingwood Magpies and is a keen follower of Liverpool in the English Premier League and the Australian Socceroos. You can follow him on Twitter: @paulbastin10.

Sam McInerney is currently studying a Postgraduate Diploma in Journalism at La Trobe University, having previously completed a Bachelor of Arts, where he majored in Media Studies. Sam is passionate about sport, particularly AFL, and has aspirations to become an AFL print journalist.

Maxwell Finch is a third year Journalism student at La Trobe. Being a predominantly self-taught photographer, Max decided against studying photography and studied journalism to further his writing skills. He felt there were too many contemporary photojournalists who could hardly write a caption and too many journalists who couldn’t take half a photo. The logical conclusion was marrying the two passions of making photographs and the written word. A photograph should still tell a thousand words, but there will always be story behind the image, and one should be able tell that story properly.

Adria De Fazio is in her third year of journalism studies at La Trobe University. Her studies to date include podcast and broadcast productions, as well as the printed word. Her blog can be found here. She has completed a Canberra desk internship at Parliament House, as part of a Crikey venture. This has strongly piqued her interest in the nation’s politics. On the horizon of her completed journalism degree, Adria sees a future in political commentary.

Bridget Rollason is a third year Bachelor of Journalism student at La Trobe. She hopes to achieve a career in broadcast journalism. Her interests include Australian politics, travel and attempting to get a tweet televised on Q & A.

Paddy Naughtin is in his third and final year of his Bachelor of Journalism at La Trobe University. Growing up in the small country town of Beechworth, Paddy moved to Melbourne at the start of 2011 and hasn’t looked back since. He is an avid sports fan, getting up at ridiculously early times to watch whatever sport is being played around the world. Paddy also likes to think he is a bit of a muso, going to as many live gigs as possible, whilst also attempting (some would say failing) to learn guitar. You can follow him on twitter @PaddyNaughtin.

Rachel Wagner is a fourth year Bachelor of Laws and Media Studies student at La Trobe University. Between lectures you can find her writing about anything from the latest street styles to social justice issues affecting Australians. After completing an internship with Universal Magazines, Rachel is fascinated with every aspect of the publishing industry and aspires to one day run her own magazine. You can follow her on Twitter @rachelshae.

Stephanie Azzopardi is a third year journalism student at La Trobe University. After moving to Melbourne from regional Victoria in 2011, Stephanie has cultivated an interest in fashion and pop culture and will be writing for the fashion and lifestyle section of upstart. After completing a political journalism internship with Crikey in Canberra last year,  she has also developed an interest in Australian politics. Stephanie hopes to progress to more magazine work in the future. Follow her on Twitter at @StephAzzopardi.

Tahlia McPherson is a third year Bachelor of Journalism student at La Trobe University. Originally from Albury, NSW, she moved to Melbourne to pursue a career in journalism. Aspiring to one day travel and write about world affairs and politics, or do media work for a large company, her main interests lie in lifestyle, culture, fashion and politics. Having just come back from a two-month exchange in China, she takes a keen interest in Chinese culture and Sino-Australia relations. She also hopes to become fluent in Chinese and do some correspondent work. Having written for Valerie Magazine and upstart in the past, her work will continue to emerge as part of upstart’s new editorial team. Follow her on Twitter @TahliaMcPherson

Tara Watson is a Graduate Diploma of Journalism student and Bachelor of Arts degree graduate. She loves writing on everything but particularly travel, lifestyle, fashion and the quirkier things in life. She is known for being a bit of a crazy cat lady, an online shopping tragic, reality television fiend and having a serious obsession with vintage clothing. Tara’s dream is to one day write for a Melbourne based magazine, hopefully combining some of her passions while still having time to dote over her many feline friends. You can follow Tara on Twitter: @taraswatson.

Timothy Arendshorst is studying a Bachelor of Journalism at the La Trobe University. As a part of the upstart team Tim has an interest in writing lifestyle pieces and about local Melbourne entertainment. This is Tim’s final year of his degree and he hopes to work in print or radio journalism in the future. You can follow him on twitter: @TimothyArendshorst.

Zainab Hussain Shihab is an international student from the Republic of Maldives. She is currently in her third and last year of the Journalism program at La Trobe University.  During her primary and secondary schooling Zainab studied in Sri Lanka, New York and Saudi Arabia. She enjoys travelling, doing volunteer work and writing short stories. You can follow her on twitter: @ZainabShihab.