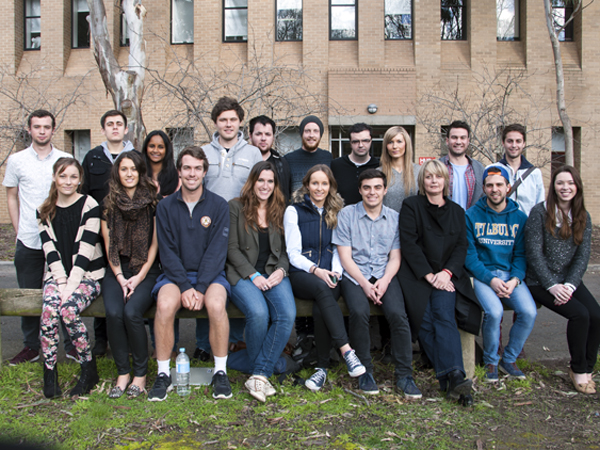 upstart is a beast that keeps on growing, and we are thankful for that. Once again we have had to expand our editorial team to manage the ever-increasing volume of quality content from Australia’s next generation of journalists.

This semester we will also have a team dedicated to covering the upcoming federal election. You will get to meet them once the election date is finally called (again).

Do read on to meet the team that will be running the show over the coming 13 weeks.

Ingrid Vaughan is a third year journalism student at La Trobe University. She was one of the first students to undertake the university’s Crikey internship at the press gallery in Canberra, and she is now hopelessly addicted to Australian politics. Her interests include social media, feminism and live music, as well as reading, op-shopping and maintaining her love-hate relationship with the news. When she graduates, Ingrid would like a job that involves reading all day – preferably from a hammock. You can read her neglected blog here and follow her on twitter @IngridVaughan.

John Pyrros is currently completing a Master of Global Communications and a Bachelor of Laws. He has completed internships with the ABC, on ABC News Breakfast, and in Canberra’s Parliamentary Press Gallery in conjunction with Crikey. John is a self-proclaimed political nerd, which has come about through his background in law, and he has a love for everything sport. John’s dream is to land a gig in broadcast, which he hopes will lead him into a career as a foreign correspondent. You can follow him on Twitter @JAP_90.

Liam Quinn is currently completing his Bachelor of Journalism degree. He has been a regular contributor to the magazine throughout his tenure at La Trobe University, and last year led upstart’s coverage of the US Presidential Election, while on exchange at Michigan State University. Liam has worked for BackPageLead — Australia’s leading sports opinion site — for two years, covering a wide range of sports both home and abroad. He also has a weekly podcast that focuses on the world of US sports. Follow him on Twitter: @liamquinn23.

Paddy Naughtin is in his third and final year of his Bachelor of Journalism at La Trobe University. Growing up in the small country town of Beechworth, Paddy moved to Melbourne at the start of 2011 and hasn’t looked back since. He is an avid sports fan, getting up at ridiculously early times to watch whatever sport is being played around the world. Paddy also likes to think he is a bit of a muso, going to as many live gigs as possible, whilst also attempting (some would say failing) to learn guitar. You can follow him on twitter @PaddyNaughtin.

Daniel Baricevic is a third-year Bachelor of Journalism (Sport) student at La Trobe University. After realising that a professional career as a ‘cultured’ centre-back was never going to eventuate, he decided that writing about football was a much better option. Apart from his love of the round-ball, Daniel is a keen motorsport follower and having contributed to upstart and sports opinion website Back Page Lead over the past two years, he looks forward to his new role as part of the upstart editorial team. You can follow him on Twitter @danielbara4.

Bridget Rollason is a third year Bachelor of Journalism student at La Trobe. She hopes to achieve a career in broadcast journalism. Her interests include Australian politics, travel and attempting to get a tweet televised on Q & A.

Tahlia McPherson is a third year Bachelor of Journalism student at La Trobe University. Originally from Albury, NSW, she moved to Melbourne to pursue a career in journalism. Aspiring to one day travel and write about world affairs and politics, or do media work for a large company, her main interests are in lifestyle, culture, fashion and politics. Having just come back from a two-month exchange in China, she takes a keen interest in Chinese culture and Sino-Australia relations. She also hopes to become fluent in Chinese and do some correspondent work. Having written for Valerie Magazine and upstart in the past, her work will continue to emerge as upstart’s new social media editor team. Follow her on Twitter @TahliaMcPherson

Kamara Estelle Bogoda is a second year Bachelor of Strategic Communication student at La Trobe University. After completing an internship with Melbourne WebFest, Australia’s first Web Series Festival, she is even more eager to learn and write about the arts industry. Kamara has a burning passion for writing lifestyle, culture, travel and social justice pieces. You can follow her on Twitter @Kamarabogoda.

Chris Mullarvey is currently completing his Bachelor of Media Studies at La Trobe University. With a keen interest in video production relating to both documentary and fiction, his weekly podcast gives a running commentary on both local and international film news and culture. The program also features interviews with local directors and producers who provide a candid insight into their projects and experiences. Unable to keep his mouth shut, Chris also spends his nights in front of rowdy bar patrons as the lead singer and songwriter for Melbourne rock band Auranix. You can follow him on Twitter @ChrisMullarvey.

Emily Fear-Gook is in her last year of a Bachelor of Journalism degree at La Trobe University. With a passion for presenting, food and all things Kim Kardashian, Emily hopes to land a job as TV host in the not too distant future. In the mean time, she plans to infiltrate upstart’s Fashion & Lifestyle section and give her take on health, arts and entertainment industry. You can follow her on Twitter @EmilyGook.

Ivana Krsteska is a twenty-year-old journalism student and is currently completing the third and final year of her bachelor degree. She enjoys writing on the topics of lifestyle, fashion and society. She also has a keen interest in broadcast journalism hopes to one day be the voice of your favourite morning show.

James Gray-Foster is third year Bachelor of Journalism student. He harbors an avid passion for a number of sports, mainly football and AFL, but also shares a keen interest in our nation’s politics. Furthermore, James is a passionate traveller, and with two parents born overseas, he has already seen much of the world. Although he is unsure about what area of journalism he wants to pursue, a future overseas is not out of the question and remains an exciting possibility. Follow James on Twitter @JamesGrayFoster

Jesse Setaro is currently in his final semester of a Bachelor of Journalism at La Trobe University, pursuing a career in print media. A self-professed music nut. If he’s not writing about a band in his spare time then he’s probably watching them at your local venue — drink in hand. As a part of the upstart team, he hopes to bring his passion for music to readers over the next semester. An avid sports fan as well, you can probably find Jesse reading up on anything and everything NBA related. Follow him on Twitter @JSetaro.

Julia Szuflak is a third year media student. She fell in love with Australia when she discovered the country on holidays as a child, and it was only natural she came from France to study journalism for her final year of uni. Julia is interested in culture, society and her big passion is travelling. She has already been in a lot of countries, and would like to share everything she has learned with upstart‘s readers. She is also journalist for a French online newspaper, and enjoys writing novels in her spare time.

Lesly is currently pursuing her Masters in Global Communication at La Trobe University. She deliberately likes to leave out her last name.
After writing and blogging about fashion for over 3 years, she was more than ready to move on. In her first semester, she found that her understanding of world politics wasn’t as dreadful as she thought it was and after interviewing two foreign correspondents, her purpose in life suddenly seemed much clearer.
Lesly is a serial photo, Chelsea FC and TIME magazine (re) tweet-er and you can follow her at @_Lesly_Lesly.

Mandi Santic, Staff writer
Mandi Santic is in her final semester of a Bachelor of Journalism at La Trobe University. She has completed La Trobe’s internship at the Press Gallery in Canberra, which also saw her work published in Crikey. Mandi has also recently completed an internship at Victoria Police, working alongside the Publications team, which produces The Gazette and Police Life magazine. She is passionate about music, art, fashion, women’s issues and travel. She also loves creative story writing and wants to fulfill a lifelong aspiration of writing her first novel. You can follow her on Twitter @CandidMandi.

Matt Calvitto is currently completing his Masters of Global Communications at La Trobe University. He has written on a number of topics including fashion, business, health and cars. A passionate automotive enthusiast, Matt hopes to become a motoring writer upon completion of his degree.

Ryan Lepore is a third year Bachelor of Journalism (Sport) student. He has previously worked as an on-air radio presenter and has a passion for both print and broadcast. Ryan is a sports nut who could tell you anything about almost any sport in the world. He is part of the VFL media team and writes for the Sandringham Zebras.

Tom Midwood, Staff writer
Tom Midwood is currently in his final semester of Bachelor of Journalism (Sport). When he was younger he held aspirations of being a velociraptor but when that didn’t quite work out he decided to focus his attention to writing. Since then he’s written on a number of different topics, but is mostly focused on film & TV as well as being a fanatic of English football.

Tom Morris, Staff writer
Tom Morris is a third year sports journalism student. He works at St Kilda Football Club as a writer and social media assistant as well as the Back Page Lead. While he enjoys writing about football — both AFL and soccer, it’s cricket that interests him most. Tom is a passionate sports fan and a keen journalist.

Erin Lyons and Louise Bianco are also part of the team, but they are currently on holiday (the lucky ladies) and will be joining us in the very near future!