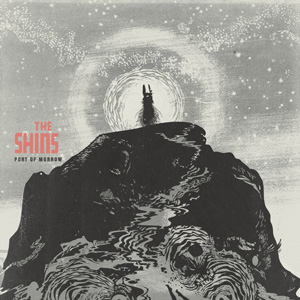 What is it that made The Shins so irresistible on their debut album, Oh, Inverted World, in 2004?

Lead singer/songwriter James Mercer’s intricate arrangements and cryptic-but-comprehensible lyrics were always a draw, but the band was so appealing because in an overflowing mecca of downtrodden, ironic indie songsters, they were a lot of fun.

Of course, songs like Know Your Onion! rewarded acute listeners with some of the most perfected structures in recent pop, but they were so immensely danceable that you didn’t feel guilty for brushing away the more cerebral elements of their music.

Unfortunately, on Port of Morrow, the group’s first full-length album in five years, the more rewarding aspects of their music seem to have almost vanished in favour of far more generic indie rock.

No more oblique and mystical lyrics, no more inventive progressions. And while the band manages to retain elements of their unique charm on the record, without the more subtle elements of their music that made the last few so great, it’s simply unsatisfying.

But what’s unsatisfying isn’t that it’s a bad record, but that it’s an extremely safe one. It’s certainly enjoyable to have on in the background if you’re cleaning the kitchen.

It’s dreamy, and it’s pleasant – but that’s the worst part.

Besides the opening album standout The Rifle’s Spiral and Bait and Switch, the album never strays from its formula of plodding pop songs with pretty melodies and terribly forgettable lyrics.

Simple Song, the first single off the record, while an example of how impressively powerful James Mercer’s falsetto can be, remains painfully ordinary and wouldn’t be totally out of place in an episode of Scrubs.

It’s got a generic guitar riff, generic chorus, and terribly generic lyrics. In fact, many of the songs on Port of Morrow aren’t just generic, they’re downright corny. It’s not hard to imagine an adoring fan hearing It’s Only Life for the first time and feeling far more than crestfallen.

The song rolls along at an innocuous tempo that even Kelly Clarkson would feel comfortable crooning over, before settling into a painfully trite refrain: ‘well I guess it’s only life/it’s only natural’ and pulling the traditional short solo guitar solo and returning to the verse.

Port of Morrow is comparable to Band of Horses’ 2010 release Infinite Arms. Following a few albums featuring more than a few excellent tracks, it’s as though both bands lapsed into the idea that a slower and more meditative album would be a good idea.

And it could have been a good idea. Except they forgot the songs.

Sean Watson is a Bachelor of Arts student at the University of Melbourne. You can read more of his work at http://gatheringfuel.wordpress.com.