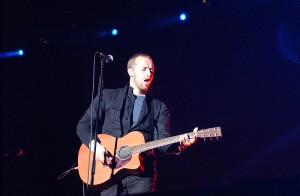 From the foursome’s first appearance on stage, it was always going to be a show to remember. Coldplay’s lead singer Chris Martin thanked the crowd for making the effort of coming to their show and promised an equal effort in return to give Melbourne fans the best concert they’ve been too. And for many, if not all, they sure did.

After opening the night with the melodic sounds of Mylo Xyloto, the name of their latest album, the band transitioned straight into the big hit Hurts Like Heaven and fanatics were immediately assured of a good night ahead.

Accompanied by electrifying fireworks and colourful confetti flying in the air, the crowd was mesmerised by the unbelievable production that followed throughout the night.

It was all about colourful lights, giant balls bouncing across the jam-packed moshpit, fireworks, laser lights and best of all, some top-quality tunes.

Upon entry, fans were given wristbands that created sparkling light effects, visually and emotionally imitating the joyful atmosphere of a late-night Christmas Eve. And song after song, it just kept on getting better and better.

Although the set-list heavily leaned towards their new album – which may have surprised some – Coldplay did also play their all-time fan-favourites such as Yellow, The Scientist and tearjerker Fix You.

Their first number one single in Australia, Paradise, was one of the loudest sing-alongs amongst fans, who, like Chris Martin, did not want to stop singing. Charlie Brown and Princess of China, despite missing supporting artist Rihanna, also received an immense reaction from the crowd.

There’s no doubt Martin and the band went above and beyond and it seems that this band always aims to interact with their vast crowds. Using the tunnels of Etihad Stadium, the quartet disappeared off the main stage, soon to be found playing on a small riser mixed in a sea of fans.

Throughout the night Martin talked about the chemistry of the group, which is undoubtedly their strongest characteristic. But there was no doubt that the show revolved around their main man, and boy did he impress.

His stage presence replicates the confidence of a lion in its den. His contagious joker persona remains playful and enthusiastic throughout the almost two-hour set, ensuring the night ended at the speed of light, leaving fans wanting more of that sweet mellow symphony.

Luckily for the audience, the whole concert was filmed and it will be made available to the public, for those that want to re-live that unforgettable night.

Performing at their finest, Coldplay gave their best efforts as promised, leaving their Aussie fans with an experience that will last them a lifetime.

Soon after the two hours of blissfulness ended, Facebook and Twitter feeds were overflowing with mentions of Coldplay, with many describing the concert as ‘phenomenal’, ‘brilliant’ and ‘beyond amazing’.

After almost two decades since Martin, bass guitarist Guy Berryman, lead guitarist Jonny Buckland and drummer Will Champion first established Coldplay, the group has had its fair share of ups and downs.

The guys have continually tried to prove themselves as a world-class band and now after the release of their latest album, as well as the incredible world tour, the sometimes underrated British sensation can easily be named as one of the greatest performance acts that has ever played on Australian soil.

Ivana Krsteska is a third-year Bachelor of Journalism student at La Trobe University. Follow her on Twitter: @ivana_krsteska