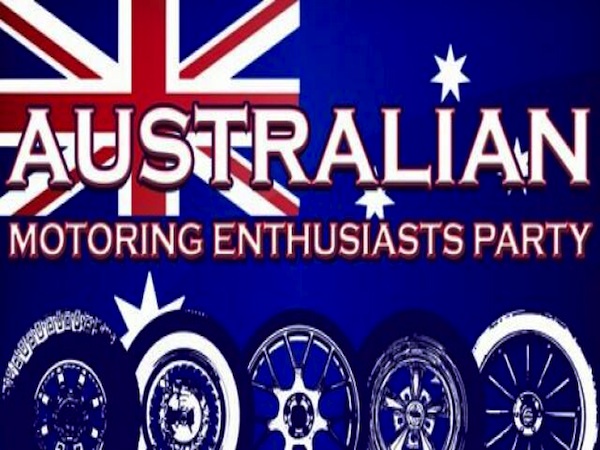 A record number of parties have registered ahead of this year’s election. Over the next few weeks, we’ll be digging into the newest entrants to political thunderdome. Next up is the Australian Motoring Enthusiast Party.

The driving community came together three months ago to form the Australian Motoring Enthusiast Party, concerned their culture was under threat.

Advocating for driver education, better roads and uniform road rules nationwide, the AMEP formed because they felt they currently weren’t being represented by any of the major parties.

Western Australian candidate Sharon Young, has been slandered as a “menace to society” for being a motoring enthusiast. She says the perception of people is increasingly becoming more intolerant of modified cars with nice exhausts.

She hopes to have a voice at the next election to liberate her culture of the discrimination they face by uniting the sub groups of the motoring community.

“We’ve brought together the hot rodders, street machines and four-wheel-drivers. We are also bringing in the bikies and truck drivers because we are all vilified and seen as a menace to society, which is just so untrue,” says Young.

“If you hear a car that has a nice exhaust that is well maintained you say ‘wow that’s really nice’, but people have been educated now to think you’re a hoon.”

Young suggests the government is unfairly legislating against the motoring population without discussing these issues with the community. The AMEP has decided to take responsibility by giving a voice to drivers.

“We are being legislated out of existence and the government is bringing in all these laws with out any consultation from our community,” says Young.

“We are part of an 11 billion dollar after market industry that employs 30,000 people.

“The way the government is going they are going to destroy another segment of the motor industry because we have bureaucrats that are so far removed from general society, they don’t understand our culture.”

The AMEP are campaigning for a review of the system, which includes compulsory driver education from an early age, to reduce the death toll on our roads.

“In this country, 17-25 year olds are over represented in the road fatalities. Currently the government’s attitude is they address it with deterrent type principles and just it does not work with our young people.”

Campaigning to improve national highways and roads, the AMEP want to ensure the money driver’s pay in vehicle-associated taxes are distributed to improving the state of the nations roads.

“When you look at statistics the majority of our road fatalities are caused through poor roads, this is something the government does not want to bring to anybody’s attention,” says Young.

“The amount of money we pay in taxes through fuel and registration is not going back into roads. This money is being funded into other areas so we want to do a review on how the government is currently spending our money on our roads.”

The AMEP believe the legality of a motor vehicle and road rules should not vary from state to state to avoid confusion and inequality.

“Currently your vehicle may be completely legal in NSW, but if you cross over the border into QLD you may be driving an illegal car,” says Young.

Achieving a strong following via social media, the AMEP had 5000 Facebook likes within the first 24 hours of the creation of their page.

The AMEP now enjoys more than 17,000 Facebook likes and 1,000 members, Young says its main objective is to protect the freedom of Australians and prevent their rights and liberties being taken away without consultation.

“The government wants us to stop modifying cars, but that’s just who we are.”

The Australian Motoring Enthusiast Party are fielding candidates in all states, for more information visit their website.